"I’m a Black man first,” Norman tells panel. "I will not tolerate any explicit biases."

By Isiah Holmes, Wisconsin Examiner - Mar 22nd, 2021 04:43 pm
Get a daily rundown of the top stories on Urban Milwaukee 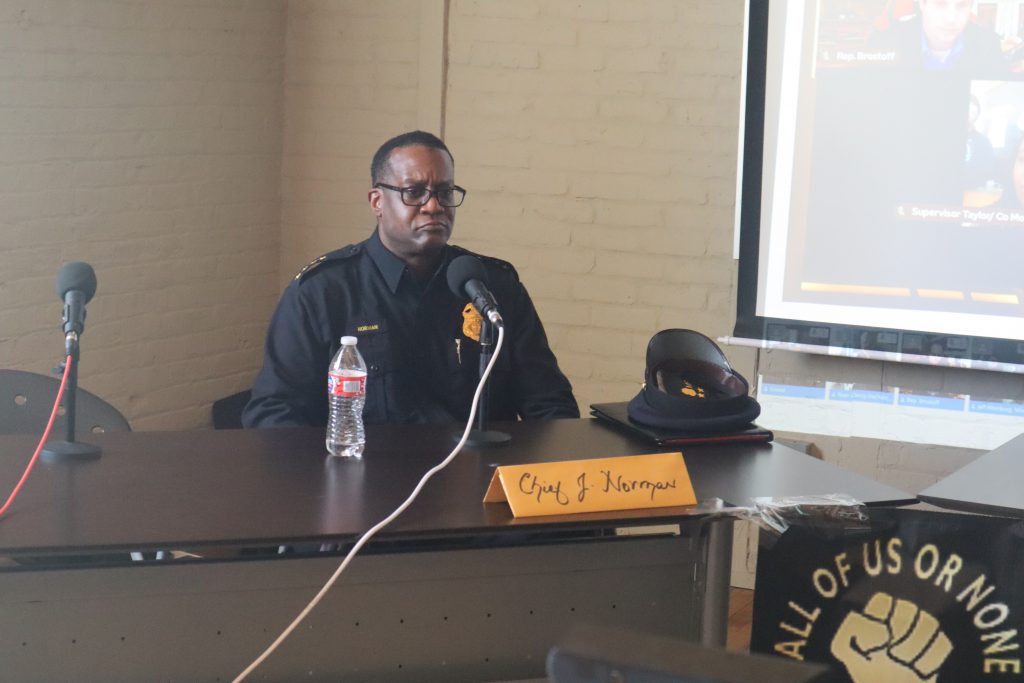 “Community engagement is very big to me,” said Milwaukee’s Acting Police Chief Jeffrey Norman during a town hall panel hosted by All of Us or None Wisconsin on Saturday. A project of Breaking Barriers Mentoring Inc., All of Us or None is an organizing initiative led by formerly incarcerated people and community members affected by incarceration.

Not just as a cop, but also as a citizen, he said, he considered the discussion important, “So I am very pleased, and humbled, to be part of this.”

The panel on Saturday brought together the perspectives of elected officials, law enforcement and members of the community. During a panel last month featuring Department of Corrections (DOC) secretary Kevin Carr, several people noted that people who are closest to the problems of crime and mass incarceration are also the ones best positioned to come up with solutions. Norman, who took the chief’s seat from former acting chief Michael Brunson in December 2020, described himself both as a 25-year veteran of MPD and as a life-long Milwaukee resident.

“Yes I am an acting chief officer of the police department,” said Norman, “but I’m a Black man first. I’m a Black man with a uniform. And this is part of what I am, but it’s not who I am.” Growing up in Milwaukee, Norman said, he had “a lot of experiences before donning this uniform. I got stopped as a kid riding my bike, questioned on where I got my bike from, why I don’t have a license plate. So I understand the depth and breath of the challenges that the law enforcement community has to overcome in regards to what it means to truly have a relationship.”

“Community engagement is not ice cream and lollipops,” he said. “It’s actually having conversations, being a part of these dialogues where we’re actually seeing the human face behind the concerns and frustrations.” Several of those frustrations came up during the meeting, both from community members and from elected officials on the panel.

Panelist Ouida Lock, an activist and board member of EXPO and a formerly incarcerated woman, noted the importance of officers walking a beat. Having police walking a neighborhood is important not just for visibility, she said, but so that officers actually get to know people on the blocks they patrol.

Police responses to domestic violence and mental health crisis situations are two areas many see as ripe for reform. This issue was raised by Mayes who, through his organization Community Task Force, has attempted to de-escalate such situations at the request of community members. Deputy DA Altenburg echoed the need to rethink what the appropriate response to such situations should be.

“When we talk about community policing,” said Altenburg, “really it’s problem-solving policing. It’s problem-solving prosecution. And what we have to get closer to is individuals like Ms. Lock, being able to walk down their street, see an officer, know that officer’s name, and be able to engage in a conversation. And, ultimately, I think that is the vision of what this community would love to see. Now, of course, that takes money, that takes time, that takes resources.”

How money is allocated has been a hot-button topic since the Defund the Police movement mushroomed across the country. Clancy, Brostoff, and other elected officials marched with thousands of Black Lives Matter protesters in 2020. They bore witness to the heavy-handed and sometimes invasive tactics departments used to confront protesters. They also witnessed instances of misconduct, including one in which off-duty officer Milwaukee officer Matthew Willmann allegedly attacked TPR protesters while drunk.

Willmann, a 14-year MPD vet, was charged with battery and disorderly conduct in the July incident, which was caught on video. He was also suspended for 45 days. TPR member and panelist Percy Hayes expressed dissatisfaction with the discipline meted out to Willmann, and citations given to camera people he allegedly assaulted. Mayes backed up Hayes’ point.

“It took almost a year to see any action taken against an officer who several people witnessed, drunk, intoxicated, and assaulted two people,” said Hayes to Norman directly. “If the roles were reversed, and one of us had swung off on him, we would’ve been put in a squad car that moment.” He added that in regards to the two camera people, “they received disorderly conduct tickets for being assaulted. And eight months later, officer Willmann gets a 45 day suspension [and the days are] not even consecutive.”

The incident occurred against the backdrop of the Joel Acevedo killing, which involved an off-duty officer and others at a party. “What are y’all doing to change this culture?” Hayes asked. “This is a culture. They were comfortable behaving this way.”

Norman countered that the department must follow due process and administrative rules. “So when we talk about how fast things move, there’s a lot of forces that we are not aware of, behind the scenes, that can slow things down and make it challenging in regards to how we address things.”

Norman added that, “it’s not as easy as a flick of the wrist or saying, ‘You’re done.’” Nevertheless Norman stressed at different points throughout the panel discussion that, “I don’t want bad cops either.”

Later in the discussion he stated, “We all talk about implicit bias. And, the unfortunate thing is until it becomes explicit it’s hard to know what people are thinking. We can only respond to actions, and I will say this much, I will not tolerate any explicit biases. I will not tolerate anyone who has a disrespect for race, gender, creed, religion. We at public services are responsible for all. And again, coming from my place of being a Black man and a resident, I have a level of sensitivity to making sure that happens. Because for me to allow that without any kind of intervention, that could be my uncle who is in Milwaukee. That could be my brother, who lives in Milwaukee. That could be my in-laws who live in Milwaukee. It could be my grandma who lives in Milwaukee. I take that seriously.”

The power to hire and fire officers belongs to the Fire and Police Commission (FPC). Although the chief’s powers in this area are limited, Norman is making his stance within MPD clear.

“For those who allow officers to have those behaviors, you’re not going to like me. And I don’t care. Because again, with my uniform off, I look like everybody else in here.” Mayes pointed out that there are several policy reforms which could aid in some conduct issues. These include a “red-flag system” to detect problem officers as well as the push to reallocate funds away from the police.

“Now I know there will be pushback to that,” said Mayes. “People don’t like terms like ‘defund the police,’ they don’t like ‘red-flag system,’ they don’t like these terms. Whatever term you want to use, ‘checks and balances,’ ‘re-invest’ ‘reallocate,’ we’re talking about the same stuff. At the end of the day, there needs to be some system that prevents these officers from being unable to continue employment. Or to continue to hide under veils with stuff in their personnel files that never gets revealed, or people never know about until they do something major.”

During the last portion of the panel discussion members of the community were allowed to ask questions of the panelists. One woman talked about her daughter, who was tasered by Brown Deer officers who claimed they were bitten by the 18-year-old. Altenburg invited her to have her lawyers contact the Milwaukee County District Attorney’s Office to discuss the case.

Another man spoke for his son, who has been forced to wear an ankle bracelet for the remainder of his life after a statutory rape charge. “He was 18 and she was 17,” the father said, holding back tears as he wondered why his son needs to be monitored forever. Milwaukee County Sup. Sequanna Taylor responded that she and others are exploring the possibility of re-evaluating the area’s lifetime monitoring policies.

At the end of the panel discussion, the audience applauded Norman’s willingness to participate. His presence in person during the event made an impression on many of the participants and onlookers. Peggy West, statewide campaign director for EXPO and a panelist, suggested that MPD plan its own series of town halls to hear the community’s experiences. All of Us or None will be holding another panel discussion next month, focusing on youth justice reform.