Rebecca Kleefisch. Photo from the State of Wisconsin.

Former Republican Lieutenant Governor Rebecca Kleefisch is planning a run for governor as Urban Milwaukee reported in September. But it’s been a very quiet campaign. Kleefisch has had little to say about the state mask mandate or other pandemic restrictions or about Republican challenges to the Wisconsin presidential election results. She has resolutely avoided controversy and stayed under the radar, forming a non-political sounding entity, the 1848 Project, to build support for her candidacy.

So it was more than a little odd to see her top communications person, Alec Zimmerman, offer this tweet on March 10, in response to a news item that Gov. Tony Evers would “host 6 Virtual Badger Bounceback Sessions with focus on economic recovery.”

Said Zimmerman: “This is like Jeffrey Dahmer walking into a morgue surprised and asking how all the bodies got here.”

Anna Kelly, Communications Director of Republican Party of Wisconsin, liked the comment so much that she re-tweeted it.

As Democrats noted, Evers’ Badger Bounceback campaign aims to help Wisconsin recover from a pandemic that has infected more than 570,000 people, hospitalized nearly 27,000 and killed more than 6.500 people.

“I’m sure the 6,500 Wisconsin families who have had to bury a loved one during the pandemic will appreciate the serial killer jokes at the expense of a Governor who did nothing but try to help people while Republicans thwarted his every move,” state Sen. Chris Larson (D-Milwaukee) said.

Melissa Baldauff, a longtime Democratic operative who served most recently as a communication director for Evers, called Zimmerman’s comment “tasteless, gross and offensive,” while longtime PR executive and Democratic politico Evan Zeppos called it a “degrading and inappropriate soundbite” and said Zimmerman “should be ashamed of himself professionally and politically.”

Get a daily rundown of the top stories on Urban Milwaukee
As for the Kleefisch campaign, the silence was deafening. Charles Nichols, executive director of the 1848 Project, declined to comment or to connect Urban Milwaukee to Kleefisch for comment. Scott Jensen, the former Republican Assembly Speaker who has been a campaign strategist for Kleefisch since she was first elected Lt. Governor, said he didn’t follow Twitter, didn’t know anything about it and therefore couldn’t comment.

To Assembly Minority Leader, Rep. Gordon Hintz, Zimmerman’s comment is part of a GOP pattern. “This is yet another example of the burn-it-all-down style politics that is emblematic of Wisconsin Republicans right now. They should focus less on maximizing the shock value of their statements and more on helping the people of Wisconsin bounce back from the COVID-19 pandemic.”

This is not the first time a political operative has used a Jeffrey Dahmer comparison and provoked a controversy. Back in March 2013 Democratic Party of Wisconsin spokesman Graeme Zielinski compared Scott Walker to Dahmer after the Republican governor survived a John Doe investigation of his county executive office that resulted in charges against six of his employees.

In the furor that followed Zielinski was removed from his position by the Democratic Party.

Baldauff and other Democrats say Kleefisch should dismiss Zimmerman with similar dispatch.

“I think it says a lot if he is not fired,” Bauldauff says. “Not taking any action about this really says something about Kleefisch.”

Today’s Republicans, however, tend to double down when challenged to take back any controversial comments. But Kleefisch, notes Mordecai Lee, a former Democratic legislator and UW-Milwaukee Professor Emeritus, is cut from a different cloth.

“One of Ms. Kleefisch’s advantages as a candidate and past office holder is that she comes across as a nice person,” he says. “That image is worth a million dollars politically. She risks losing it by letting her campaign use such a brutal style of expression. In particular, running against Evers means running against a person who has a high ‘niceness’ quotient.”

Which is to say, comparing your opponent to a serial killer isn’t the way to go.

Clarification: Graeme Zielinski has noted that his was an “amicable departure” from the Democratic Party, which then state Party Chairman Mike Tate confirms. But before this happened Zielinski was removed as spokesperson for the state Democratic Party after his Dahmer comments, as Tate told the media back then. 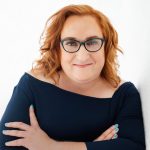