School Vouchers a Danger For Democrats

The issue could lose them enough voters in Milwaukee to lose the state. 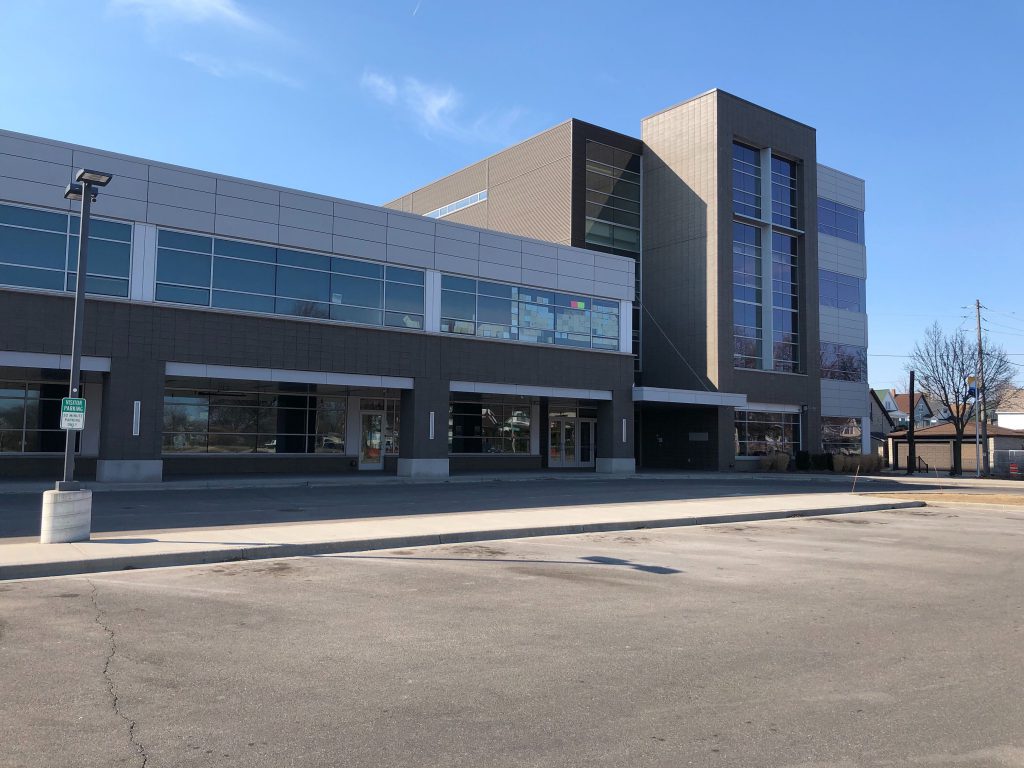 When it comes to the issue of school vouchers, Democratic voters face a quandary. Reports from the Marquette Law School Poll show the challenge in satisfying two groups of voters each of whom is crucial to Democratic victory.

Last August the poll asked a sample of registered voters whether they agreed or disagreed with providing “tax-funded vouchers to be used for private or religious schools.” The poll’s website includes crosstabs allowing one to see how the answers varied according to the voters’ other characteristics.

At first glance the partisan lean on this issue seems very clear. The percentages agreeing with school vouchers are shown in green; those disagreeing in red. The results seem clear: Republicans, as a whole, support vouchers; Democrats opposed them. As did independents, by a smaller margin. 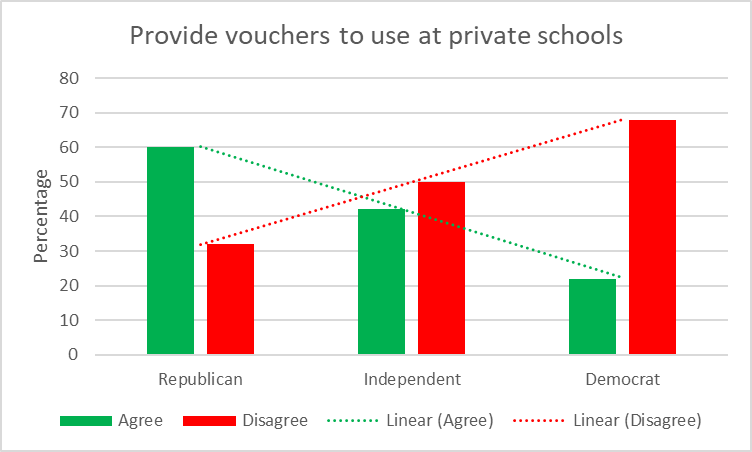 Provide vouchers to use at private schools

There are several possible explanations for this relationship. One is the close affiliation between teachers’ unions and the Democratic Party. Another is tied to varying economic views: whether private or public enterprise is inherently more desirable.

However, the story gets more complex as you look deeper. In the recent presidential election, Democrat Joe Biden won Wisconsin by only 20,682 votes, out of 3,241,050 that were cast in the state.

But in the city of Milwaukee the story was quite different. Instead of a squeaker win, Biden won 80% of the 243,471 of the total votes cast for the two major candidates. giving him a margin of victory of 146,375 votes.

Consider now the crosstab of answers to the voucher question by geography. The poll divides Wisconsin into five regions: the city of Milwaukee, the rest of the Milwaukee area, Madison and its surroundings (MSN), the Fox Valley (GB/A), and the rest of Wisconsin.

The next graph tabulates the results to the voucher question according to these five areas. Milwaukee was the only one of the five which strongly supported school vouchers, by 56% in favor versus 38% opposed (the other 8% either had no opinion or refused to answer). 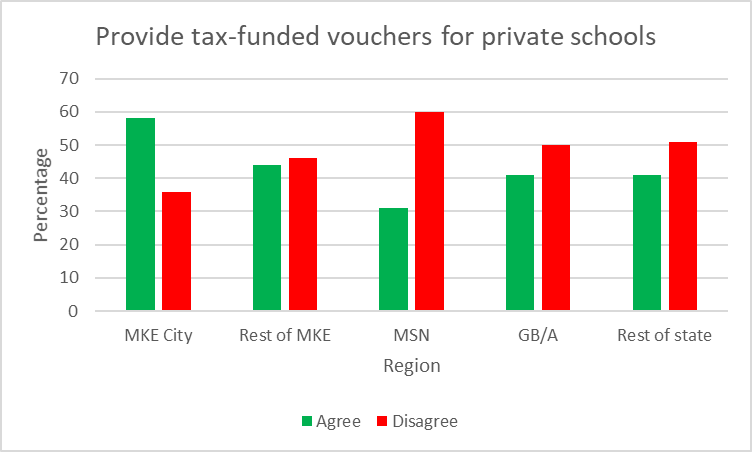 Based on its overwhelming support for Biden in the election, one might expect Milwaukee’s view on vouchers to look like Madison’s, but quite the opposite is true. The most likely explanation is that Milwaukee voters’ view on school vouchers reflects its long experience with them: if your own children—or your neighbor’s—are able to attend a private school with the aid of a voucher, one is likely to view the voucher positively.

The next graph shows the answers to the voucher question by Congressional District. The 4th District, represented by Gwen Moore, is mostly Milwaukee, with a few close-in suburbs. Biden won 77% of the vote in the 4th District. The 2nd Congressional district is based on Madison and Dane County. The response to the voucher issue closely follows the traditional Democratic script. 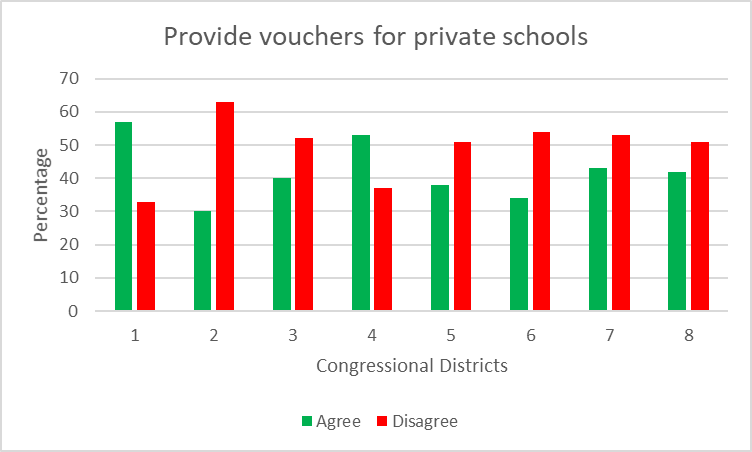 If Milwaukee voters are favorable to school vouchers, one might expect that Black and Hispanic voters, who are concentrated in Milwaukee, would also be favorable. Confirming that, however, runs into one serious problem: small sample sizes. Only 22 Hispanic voters answered last summer’s question about school vouchers, for instance. The number self-identifying as Black was 41, as other was 54, and as White was 666.

Starting in 2013, the Marquette poll included a question on vouchers 11 times, using 8 distinct questions. To get around the small sample problem, I counted the number favorable to vouchers and unfavorable for each ethnic group. The next graph shows the results. Blacks, Hispanics, and those who didn’t fit into any of the three categories were strongly supportive of school vouchers. Whites split almost equally. 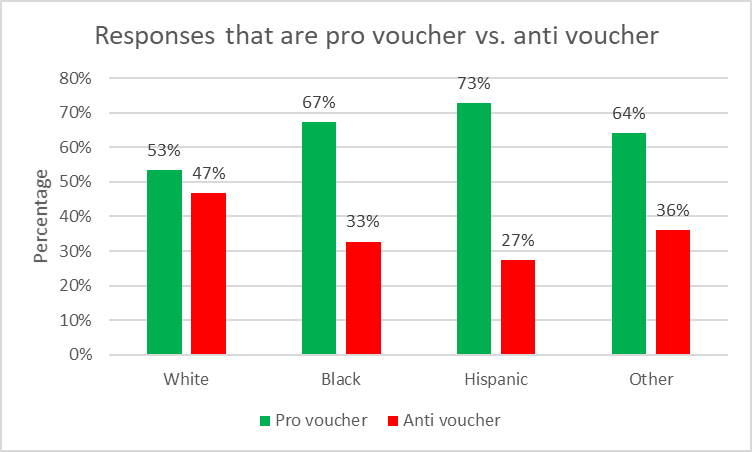 Response that are pro voucher vs. anti voucher

This approach has both pluses and minuses. On the plus side, it addresses the sample size problem, resulting in margins of error around 5% at the commonly-used 95% confidence level for the three minority groups and 1% for whites.

It also comes with a number of downsides. As mentioned, there are 8 distinct questions. Depending on how a question is asked, the voter might respond positively for charters to one question and negatively to another. It also would miss if opinions evolved over the seven-year period.

A recent New York magazine interview with the political analyst David Shor helps identify the danger for Democrats. According to Shor, in the 2020 election Democrats gained half a percent to one percent among non-college whites and roughly 7 percent among white college graduates. Support among African Americans declined by one to 2 percent. And Hispanic support dropped by 8 to 9 percent.

Here is Shor’s explanation for the shift:

… the fundamental problem is that Democrats have been relying on the support of roughly 90 percent of Black voters and 70 percent of Hispanic voters. So if Democrats elevate issues or theories that a large minority of nonwhite voters reject, it’s going to be hard to keep those margins.

A recent Twitter exchange may help to illustrate this danger. Someone with the handle MickTheQuickFan challenged long-time voucher supporter Howard Fuller over Fuller’s support for Biden in the recent election, tweeting that Donald Trump was far better than Biden on school choice. Fuller responded by saying it is because “Black Lives Matter to me more than school choice.”

There will be many more such challenges if the Democratic Party decides to make ending school vouchers central to its message. The result may not be advantageous to Democratic candidates, particularly if support from Milwaukee or minority voters is crucial to their success.

4 thoughts on “Data Wonk: School Vouchers a Danger For Democrats”