Say No To a Constitutional Convention

Legislators pushing for this again. Why it's a bad idea 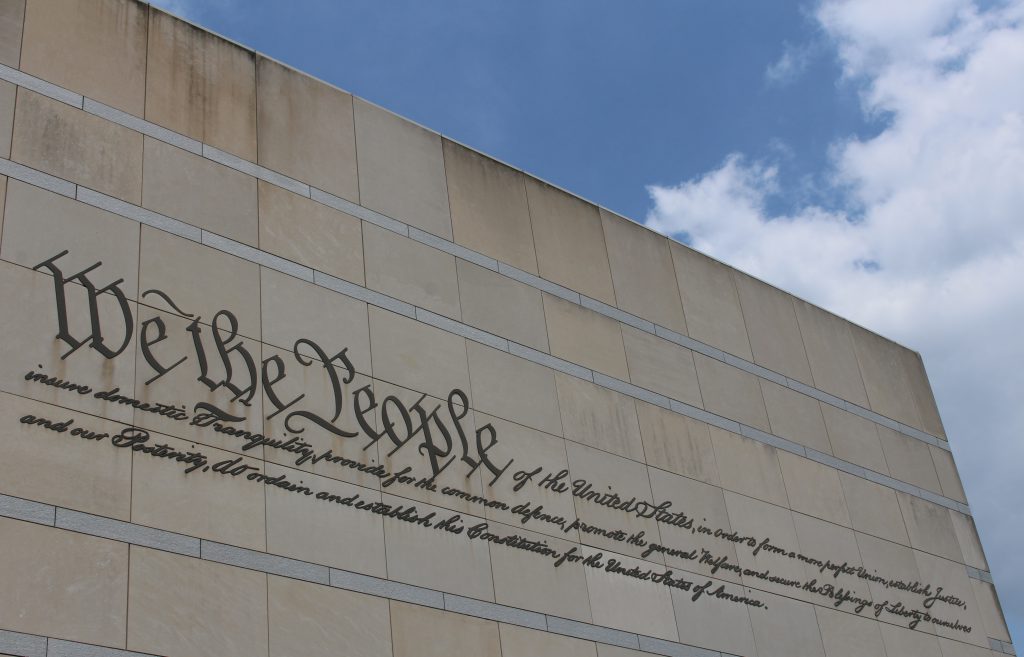 “We the People” inscription on the Front of the National Constitution Center. Photo by Housefinch1787, CC BY-SA 4.0 <https://creativecommons.org/licenses/by-sa/4.0>, via Wikimedia Commons

The testimony below was given by Wisconsin Democracy Campaign Executive Director Matthew Rothschild before the Assembly Committee on Constitution and Ethics on Wednesday in opposition to Joint Resolution 9 calling for an Article V convention of the states. Rep. Chuck Wichgers (R-Muskego) chairs the committee.

Chair Wichgers and members of the committee,

My name is Matt Rothschild, and I’m the executive director of the Wisconsin Democracy Campaign, a nonprofit, nonpartisan watchdog group that’s been around since 1995. We track and expose big money and dark money in our politics, and we advocate for clean and transparent government and a democracy where everyone has an equal voice.

We strongly oppose this joint resolution. It is overly vague and broad, and it would invite a wholesale rewrite of our founding document, thus jeopardizing our fundamental rights.

The vagueness, and the broadness, of the joint resolution is obvious in the following places: At the very top, it says “Relating to: convention of the States for one or more Constitutional amendments.” “One or more?” We don’t even know how many amendments the Convention would be considering!

And then the last whereas clause says the purpose of the Convention of the States is for “restraining these and related abuses of power.” What “these abuses” are is unclear, except for a reference to the size of the national debt and to “unfunded mandates” — and what the “related abuses of power” are is anybody’s guess.

All three of those are vague:

What would those “fiscal restraints” be?

How would it “limit the power and jurisdiction of the federal government”?

And what would the term limits be?

So you shouldn’t pretend that somehow this Convention of the States would somehow be self-limiting.

As to the proposed purpose to “impose fiscal restraints on the federal government,” let me simply point out that such fiscal handcuffing is economic idiocy and would risk imperiling our economy in times of a downturn. The only reliable medicine for bringing large economies like ours out of a recession is deficit spending. It’s like the economy has cancer and you won’t give it radiation or chemotherapy. It’s like the economy has diabetes, and you won’t give it insulin. You’ll just let the economy die.

At the Wisconsin Democracy Campaign, let me note that we also don’t believe in term limits. We believe that the people should be able to decide for themselves who should represent them.

We believe the Constitution should be amended the old-fashioned way, by having Congress pass, by a two-thirds margin in the House and the Senate, any legislation to amend it, and that three-quarters of the state legislatures must approve it. This is a cleaner, safer way to go about the amendment process.

Once you go down the Article V route, there is no telling what the delegates might tamper with, including our fundamental freedoms as described in the Bill of Rights and successive amendments to the Constitution.

This concern for protecting our cherished rights that are enshrined in the Constitution is why one of the most conservative U.S. Supreme Court Justices of the last century, Antonin Scalia, opposed the Article V route. Here’s what he said in 2014: “I certainly would not want a Constitutional Convention. Whoa! Who knows what would come out of it? … A Constitutional Convention is a horrible idea.”

It is surprising to me that so many conservatives are ignoring the prudent advice of one of their patron saints.

Thank you for hearing me out.