By Isiah Holmes, Wisconsin Examiner - Mar 2nd, 2021 07:19 pm
Get a daily rundown of the top stories on Urban Milwaukee 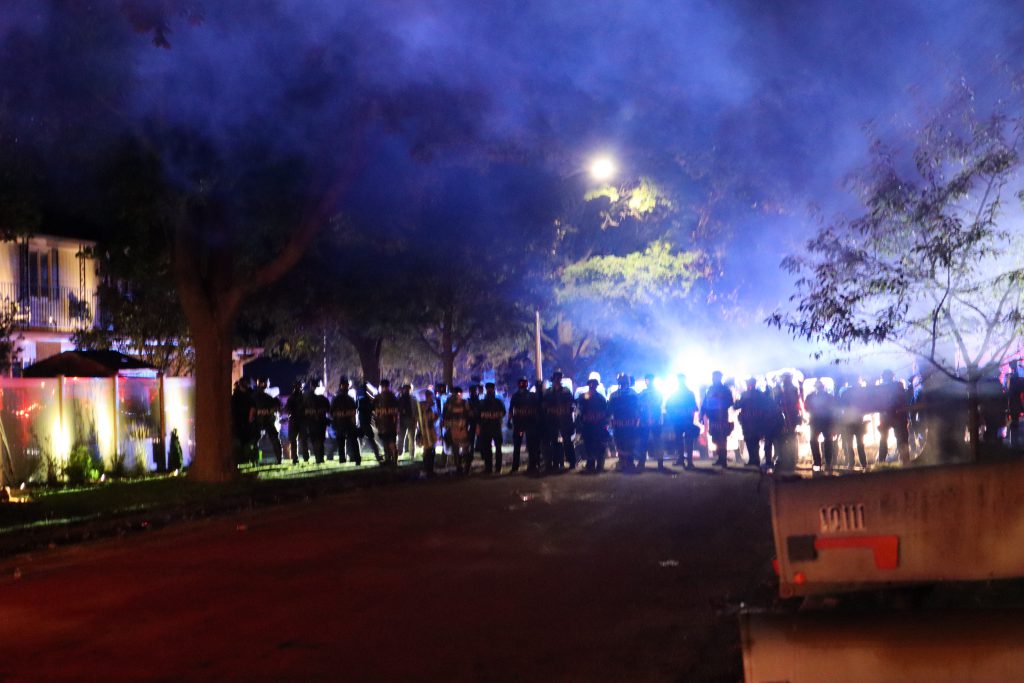 Police block a road during the October Wauwatosa curfew, after having just shot rubber bullets and tear gas at protesters and their cars. Photo by Isiah Holmes/Wisconsin Examiner.

More than 40 people who protested in Wauwatosa during 2020 were listed as “arrested” in police documents. Despite police even assigning booking numbers to the protesters, none of these “ghost arrests” documented people actually being arrested or taken into custody.

Several were also issued municipal citations for not having acquired a required “special event permit,” despite not having organized any protest themselves. Kimberley Motley, a civil rights attorney who is now involved in numerous Wauwatosa-related cases, described the arrests as “fraudulent” in a recent Fox 6piece. That coverage focused on Rep. David Bowen (D-Milwaukee), who took to the streets alongside demonstrators in Black Lives Matter protests last year. Bowen was listed on Sept. 17, 2020, as an arrest for “unlawful assembly,” and assigned the booking number of 20-001120. (Tosa PD report which list Rep. David Bowen as “arrested”)

The protest group known as The People’s Revolution (TPR) spearheaded many Wauwatosa protests, which the Wauwatosa Police Department targeted with increasingly heavy-handed tactics.

For more than 270 days since the George Floyd-inspired protests came to the Milwaukee area, TPR has marched and hosted action, meetings, gift drives and other events. The group’s continued actions of marching for 200 days were officially recognized by the Milwaukee County Board of Supervisors on Dec. 14, 2020.

Motley sent a letter to outgoing Chief Barry Weber on Feb. 1 on Bowen’s behalf, citing the apparent arrest information, and demanding a public apology. When that letter went unanswered, she issued another letter on Feb. 18 to Wauwatosa’s Common Council, Equity and Inclusion Commission, Mayor Dennis McBride and Weber. In the letter she blasted the department for the ghost arrests and other tactics it used against protesters.

“WPD has fabricated an arrest record for Mr. Bowen with a booking number, case number and ticket that was said to have occurred on 9/17/20,” Motley wrote. “Mr. Bowen has never been arrested, booked or criminally charged by ANY Wauwatosa police officer or any police officer anywhere in his life. Yet, the WPD decided to release this fabricated record on 1/7/21 to the public.”

The arrest reports were released alongside many other documents by WPD to numerous media outlets, the American Civil Liberties Union of Wisconsin and others as part of a massive open records dump. Among the documents were also unredacted videos of interviews with confidential informants, who were promised anonymity by WPD detectives. Calling the questionable arrest information and the nature of the disclosure as “beyond troubling,” Motley added that this development, “is yet another reason why a federal civil rights probe of the WPD is essential.”

Her letter further pointed out that, “Mr. Bowen is an elected official, an African American male, and a nationally known public figure with excellent standing in Wisconsin, which makes this even more troublesome and has the potential to be very damaging to his reputation and also very dangerous with his interactions with law enforcement. We don’t know if this record was sent to the Department of Justice. We don’t know if this record shows up when there are traffic stops, we don’t know because Chief Weber has not responded and as such, we are exploring legal actions.”

Bowen tells Wisconsin Examiner that neither he nor Motley have received any contact from Weber in response. “We haven’t heard anything,” says Bowen. “I guess that must be the message, that they don’t care that much about that request to just clear my name.” Not only was Bowen never arrested on Sept. 17, nor during any other protest; he never even received a ticket.

In a statement to Fox 6, WPD spokeswoman Sgt. Abby Pavlik stated that Bowen’s citation was sent to the Milwaukee County District Attorney’s office for review. According to Pavlik, because the DA’s office declined to proceed, the ticket was never issued to Bowen. She explained the assignment of a booking number as simply part of WPD’s internal system of handling reports.

“We use a report management system from a company named ProPhoenix,” Pavlik says. “The unique booking numbers are chronologically generated by that system and are associated with a person that has been entered for potential enforcement action.” Pavlik also provided a screenshot of what the entry looks like in WPD’s system. In a section called “how arrested” regarding Bowen, the system reads, “prosecutor review.” 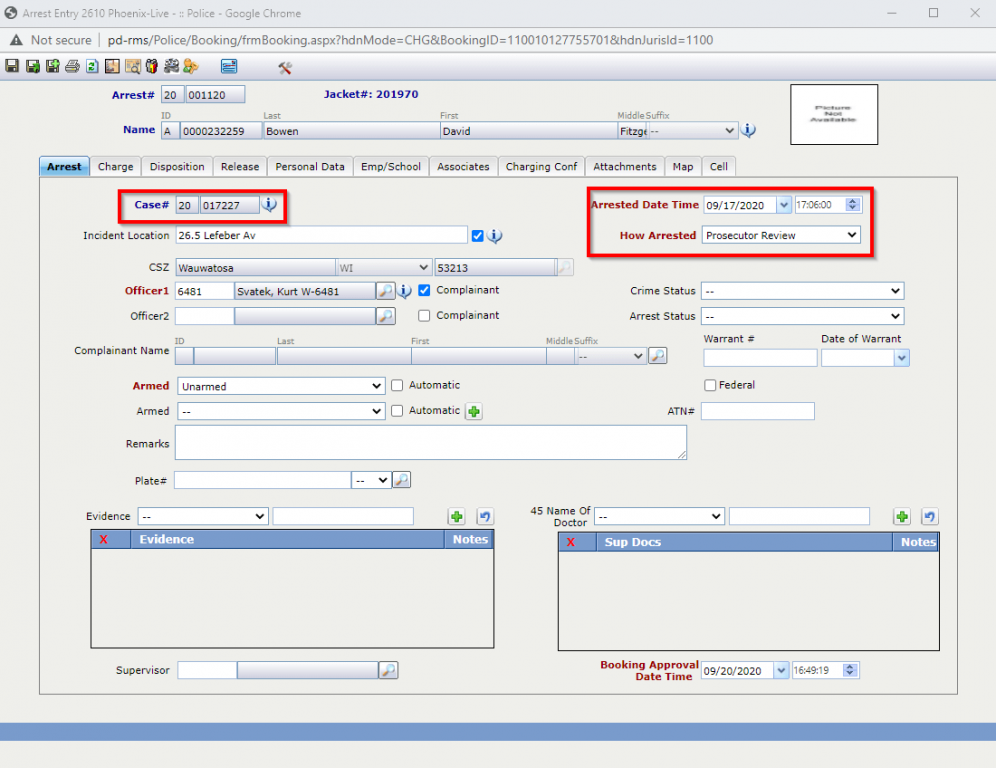 Pavlik denied the notion that listing an arrest in this context would be available to other officers searching Bowen’s name during an interaction, such as a traffic stop: “No, a case that is being reviewed by the DA would not be listed if a person’s name was ‘run.’”

Entries like Bowen’s that list arrests with booking numbers, however, are indistinguishable from records on people who were actually arrested during the protests. For example, Jacqueline Bogenberger, who has regularly been involved in protests, is listed as having been “arrested” on Sept. 30. Bogenberger was not arrested that day, nor was she detained or questioned. She was arrested on Oct. 9, 2020, during Wauwatosa’s curfew and emergency declaration, however. Between these two entries, one can’t determine which involved an actual arrest and which did not.

Wisconsin Examinerasked Pavlik whether there’s a way WPD can adjust its system to avoid this sort of confusion in the future. “At this time,” says Pavlik, “there is no alternative available. If the public were to request a report, other than their own, any of that information would be redacted, so there wouldn’t be any confusion.”

Randy Shrewsberry, a former Cincinnati-area police officer, as well as the founder and current Executive Director of the Institute for Criminal Justice Training Reform, was perplexed by the use of booking numbers if no arrest was made. “Maybe it’s something that’s internal that they decide to assign numbers,” Shrewsberry tells Wisconsin Examiner. “But I’ve never heard of non-criminal cases getting [a booking number]. If it’s a criminal summons, even absent a physical arrest, then I would get it, but not for what you’re describing.”

In addition to the assigned booking numbers the municipal citations include certain details. Some citations issued to protesters in the months prior to the curfew included “providing false information to an officer.” Several of these individuals, however, stated they never spoke with an officer and were not given their tickets in person. WPD reports show that many were, in fact, identified later by WPD personnel using video from dash cameras, and social media. (WPD report which list Jacqueline Bogenberger as “arrested as Sept. 30, 2020)

That’s how Bogenberger and at least three others were identified and cited on Sept. 30. “While the group was directly in front of my squad,” reads the report written by a WPD officer, “I was able to identify four individuals who were unlawfully assembled and ignored the dispersal order.” Bogenberger was one of the protesters identified by that officer. However, she recalls being masked and holding a sign in front of her face during the entire march.

Bogenberger questions how WPD officers were so readily able to identify her and others. Reports from that day assign Bogenberger and the others with booking numbers and citations for needing a “special event permit.”

These entries listing arrests cannot be distinguished from one that describes the only protester who was actually arrested and taken into custody on Sept. 30. Steve Conklin, another frequent protester, was also cited for needing a “special event permit” on Sept. 30. Like Bowen, Conklin was given a booking number, despite never having been arrested during the months of protest. “Not once,” he tells Wisconsin Examiner.

Wauwatosa municipal code notes that, “no person or entity acting as an event organizer shall set up for, hold, or conduct a special event, within the municipal boundaries of the City of Wauwatosa without first obtaining a special event permit.” It further states that, “the city administrator, or his designee, shall have the exclusive authority to determine whether or not an event meets the definition of ‘special event.’” (WPD report describing Jacqueline Bogenberger’s actual arrest during the October, 2020 curfew)

Conklin, however, says he has not been involved in organizing protests. He simply attends, as do some other protesters who were issued this particular citation. In September 2020, when questioned about the protesters cited for providing false information to an officer, despite having never spoken to an officer, Pavlik stated this too was due to their internal system, and that the charge didn’t actually include providing false information, despite it being on the ticket. Conklin stated that his ticket was later dismissed in court.

Motley feels that the use of booking numbers without arrests is part of a variety of tactics WPD leveled against protesters, viewed as its perceived adversaries, during 2020. Using internal documents, Wisconsin Examiner revealed that WPD placed Wauwatosa’s mayor on a high value target list for meeting and working with protesters, created a list of 40 or so people identified as protesters and sought electronic evidence through the cell phones of arrested protesters. Motley also points to the scandals from the 1990s involving racist Martin Luther King Day parties held by Wauwatosa officers as the start of a troubling pattern. Weber became chief of police as investigations over these racist parties were carried out. He’s set to retire in June.

Motley calls the “fictitious arrests and booking” of Bowen and other protesters as “an institutional problem with the WPD.” She urges city officials to not miss an “opportunity to evaluate, fix and create systems within the WPD. However, in order to fix the problem, that problem needs to be evaluated, thus, a federal civil rights probe is necessary. Also, once you know the problems THEN you can decide on the best CHIEF to hire to fix those problems and to push forward the things that work.”

2 thoughts on “The Ghost Arrests of Tosa Protesters”