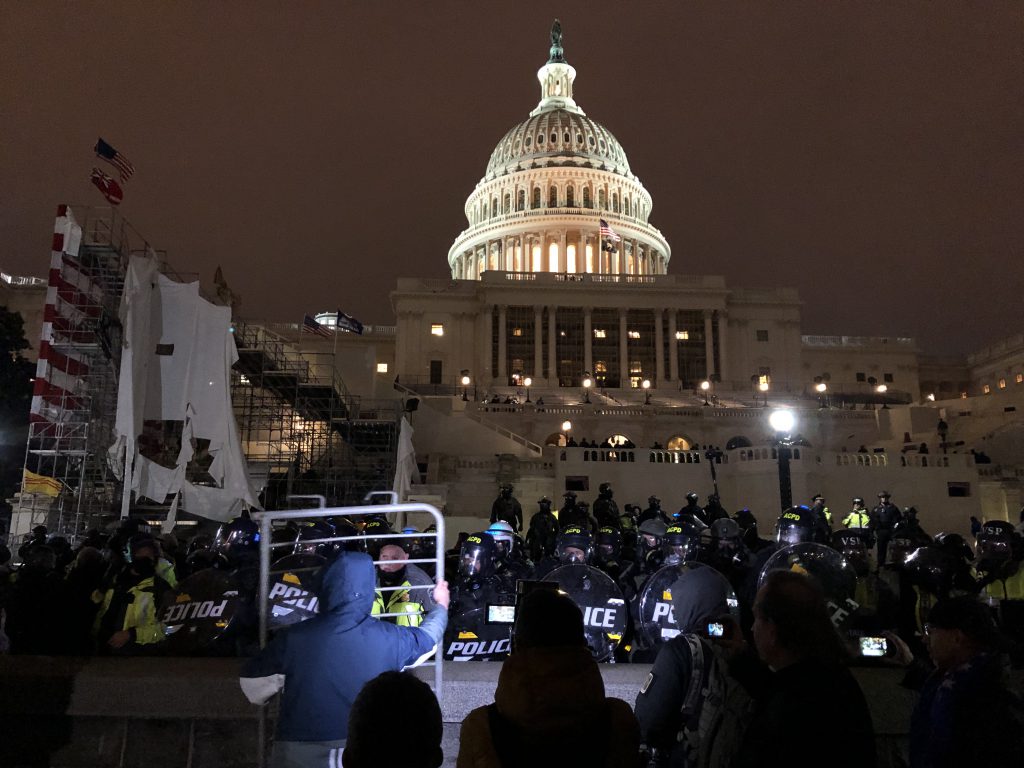 Riot police outside of the U.S. Captiol on January 6th, 2021. Photo by Tyler Merbler, (CC BY 2.0), via Wikimedia Commons

These are not good days for wealthy Republican donors Richard and Liz Uihlein, owners of the Wisconsin-based Uline packaging company. In November the husband and wife both contracted COVID-19. This was after Liz Uihlein called the pandemic “overhyped,” lobbied legislators to overturn Gov. Tony Evers’ public health restrictions and backed a petition to have Evers removed from office, as a story published by Urban Milwaukee reported.

It also came after a complaint was filed with the Occupational Safety and Health Administration that Uline had held large, unmasked “lunch and learns” in spaces that did not permit social distancing, would not allow employees to work from home, and allowed symptomatic employees to work without face coverings, as Crain’s Chicago Business reported.

Now the couple’s $4 million contribution to the Tea Party Patriots has come under scrutiny, given that group’s connection to the January 6th U.S. Capitol riot that tried to overturn the November presidential election results and caused five deaths and injured 140 police officers. Northwestern University is reviewing its contract with the Uline company after a university alumnus called on Northwestern to take action.

“I can not in good faith give any donations to a University that will turn around and do business with anyone who supports domestic terrorism,” the email from the alumnus read, as the student newspaper The Daily Northwestern reported. “I would imagine that many of your students and their parents would also not be happy about tuition dollars making their way to these organizations.”

Northwestern is reviewing its contract with Uline and will make a decision on “how to best move forward,” a university spokesperson told the publication. “We have a vendor screening process that we follow for each contract, and when we become aware of concerns about the social responsibility of companies we partner with, we review that information to determine what next steps may be warranted,” the spokesperson said.

In response to a follow-up story by the NPR affiliate, WBEZ Chicago, the Uline company referred all questions about the controversy to the Tea Party Patriots, who issued a statement “deriding Northwestern’s announcement as ‘the far left’s latest attack on the Constitution’ and an example of intolerance directed at ‘a generous donor to free-market and limited-government projects and candidates.’”

Along with claiming Northwestern was part of the “far left,” Tea Party Patriots’ spokesman TJ Winer also claimed the group did not sponsor any events on January 6th.

But as WBEZ reported, the Tea Party Patriots “were among 11 groups listed as ‘participating in the March to Save America’ as part of the ‘#StopTheSteal coalition’” and Jenny Beth Martin, co-founder of Tea Party Patriots, heavily promoted the event on her Twitter account. The group also has ties to Simone Gold, “a California doctor who faces federal criminal charges for allegedly participating in the Capitol riot” and “who worked with the Tea Party Patriots last year in a public relations push to downplay the severity of the coronavirus pandemic and oppose lockdown measures.”

Dick Uihlein contributed nearly $4.3 million in the past five years to the political action committee of the Tea Party Patriots, including $800,000 in October, according to federal records, the publication noted. That made him by far the single biggest donor to the Tea Party Patriots’ PAC, according to the nonpartisan Center for Responsive Politics.

Uline is a family-owned business that most recently reported having over 6,700 employees and over $5.8 billion in annual revenue, and calls itself “North America’s leading distributor of shipping, packaging and industrial supplies.” Its corporate headquarters is in Pleasant Prairie, Wisconsin. In 2020 Bloomberg estimated the couple’s net worth to be around $4 billion.

Dick Uihlein, as his distinctive last name suggests, has deep roots in Wisconsin. His great-grandfather August Uihlein was a co-founder of Milwaukee’s Joseph Schlitz Brewing Co., and his father co-founded the Illinois-based General Binding Corp., where Uihlein worked in international sales until he and his wife founded the Uline company in 1980.

Uihlein was merely a modest but reliable donor to Republican candidates, as Urban Milwaukee has reported, until the 2010 Citizens United decision by the U.S. Supreme Court, which opened the door to unlimited campaign spending by wealthy individuals. Since then he has become one of the nation’s top donors to right-wing politicians. That includes spending more than $7 million in a failed effort to elect Kevin Nicholson in a U.S. Senate race that was ultimately resulted in the reelection of Democrat Tammy Baldwin, and donating millions to help Senator Ron Johnson and former governor Scott Walker get elected. Uihlein “backed Roy Moore in Alabama even after he was accused of sexual misconduct with underage girls,” as has been an activist “opposing gay and transgender rights,” as the New York Times reported.

The couple has long mixed its business with politics. A regular letter to the company’s 4,000 employees, “From the President,” by Liz Uihlein, offers frequent blasts at government spending and relentless political indoctrination. As one letter noted, “High unemployment, bankrupt states, expensive government programs like healthcare, higher taxes and a relentless global economy make the elections in November very important…Dick and I love reading newspapers and when we watch TV news, the channel is mostly set on Fox News.”

And the company’s huge catalog listing all its products also includes a letter from Liz Uihlein with a long list of her political opinions.

So far that hasn’t stopped to company from continuing to grow.

6 thoughts on “Back in the News: Uline Faces Blowback on Capitol Riot”