Virtual Discussion of MLK Boulevards Around the Country

Plus, an event celebrating the legacy of MLK, a winter beer garden and Florentine Opera performances. 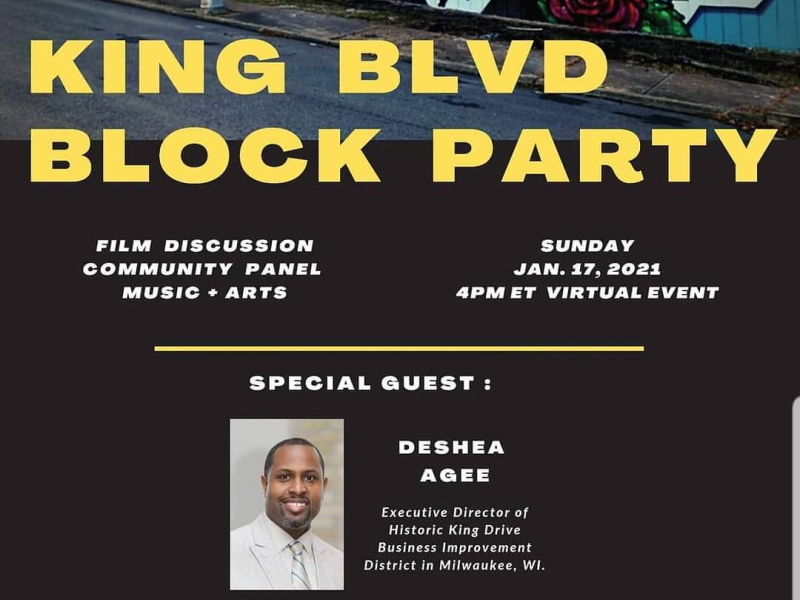 Each week, Urban Milwaukee is curating a list of events that are taking the necessary safety precautions provided by the Centers for Disease Control and Prevention in order to help prevent the spread of COVID-19.

This week, join the Schlitz Audubon Nature Center for a snowshoe tour of its campus while studying the various tracks left behind by winter critters. The Harley-Davidson Museum is rolling out a new virtual series that will explore the iconic motorcycle company’s history, and Milwaukee folk artist Trapper Schoepp will pay tribute to Bob Dylan with a performance at the Jewish Museum Milwaukee.

The new winter chalets at South Shore Terrace in South Shore Park (2900 S. Shore Dr.) are open for reservation. This is the county’s first winter beer garden season. The cozy chalets can fit up to six people and nearby fire for warming up. Up to six people from the same household or two people from different households can share a chalet for $75, which includes a $50 food and beverage credit and a 90 minute time slot. The chalets are reservations only, and are available seven days a week. To reserve, follow this link or call 414-257-5616.

Florentine Opera is celebrating music inspired by Shakespeare with performances of classics from Britten, Gounod, Verdi, Finiz and more. The hour-and-a-half long program will take place in a secret room in a Milwaukee landmark home with ties to England and bootlegging. Historian John Eastberg will make an appearance to provide some historical background. The performance is digital only and can be purchased for $25 by following this link.

The Harley-Davidson Museum is rolling out its new series of Gallery Talks — livestreamed explorations of the company’s history. Viewers will get a chance to get an up-close look at some historical items as well as view historical footage from the museum’s archives. Each session will feature a Q&A section with a team of experts. This week’s Gallery Talks topic is titled “Military — Riding with Uncle Sam.” The session will explore the roles that Harley-Davidson motorcycles played in both World Wars as well as how the company’s motorcycles developed during that time. The event is begins at 7:00 p.m. and runs for 45 minutes. Tickets are $6 each and can be purchased here.

Because of COVID-19, this year’s Giving Fest will be entirely virtual. It will be a series of over 50 events hosted by local businesses that help them raise money. The first 50 to sign up will be awarded $1,000. All that sign up will be entered to win a $5,000 prize. For more information visit this website.

There may be snow on the ground, but there are still farmers markets to enjoy, such as the Milwaukee Winter Farmers Market. The market, which is celebrating its 12th season, takes place on Saturdays from 8:30 a.m. to 12:30 p.m. in the Greenhouse Annex at the Mitchell Park Domes (524 S. Layton Blvd.) until March 27th. The market will feature 30 vendors offering fresh local produce, baked goods, cheeses, handmade soaps and more. COVID-19 safety precautions and guidelines will be enforced, including a mandatory mask policy and restrictions on eating and drinking in the market.

Each year, i.c. Stars hosts an event celebrating the legacy of Martin Luther King, Jr., with this year pivoting to an online formula. This year, the organization is putting an emphasis on teaching kids the importance of Martin Luther King, Jr’s fight for equality. The event, dubbed The Declaration of Kids’ Summit, is a virtual event that will focus on using technology as a tool for social change. The event will run from 10 a.m. to 12 p.m. To register you and your family, click here.

Deshea Agee, executive director of Milwaukee’s Historic King Drive Business Improvement District is hosting a discussion of a new feature film currently in pre-production called King BLVD and the themes that it will tackle. The film will be a comedy and commentary on the fact that many streets named for Martin Luther King Jr. are located in poor or blighted areas. The virtual event will feature a panel with the creative team behind the project, as well as performances by spoken word and musical artists. Register for the event here.

Milwaukee folk singer Trapper Schoepp will again pay tribute to Bob Dylan with a performance featuring his brother Tanner Schoepp. The duo will perform “On, Wisconsin”, which is a song based off of lyrics originally penned by Dylan. Schoepp completed the song, and later secured the rights to it from Dylan. The brothers will also play Dylan classics in the Jewish Museum Milwaukee’s atrium in celebration of the closing of the “Shakespeare’s in the Alley: A Tribute to Bob Dylan” exhibit. The performance is free and open to the public, and it will also be streamed via the Jewish Museum Milwaukee’s Facebook page as well as Trapper Schoepp’s Facebook page starting at 7 p.m. on January 19, 2021.

The Florentine Opera Company is putting on a virtual performance that will allow listeners to immerse themselves in the history and tastes of Chalon-sur-Saône in the Burgundy region of France. The show will feature Anna Reinhold, mezzo, and Jory Vinikour on harpsichord playing Baroque pieces. For extra, viewers can purchase a a French meal and tasting of Burgundian wine from Le Reve Patisserie & Cafe in Wauwatosa. If interested in the meal, you must place your order by the 18th. You can purchase tickets and the meal from Le Reve, here.