State Prepares for Next Phase of Vaccines

Priority list for phase 1b has been established. But will the federal government deliver enough doses? 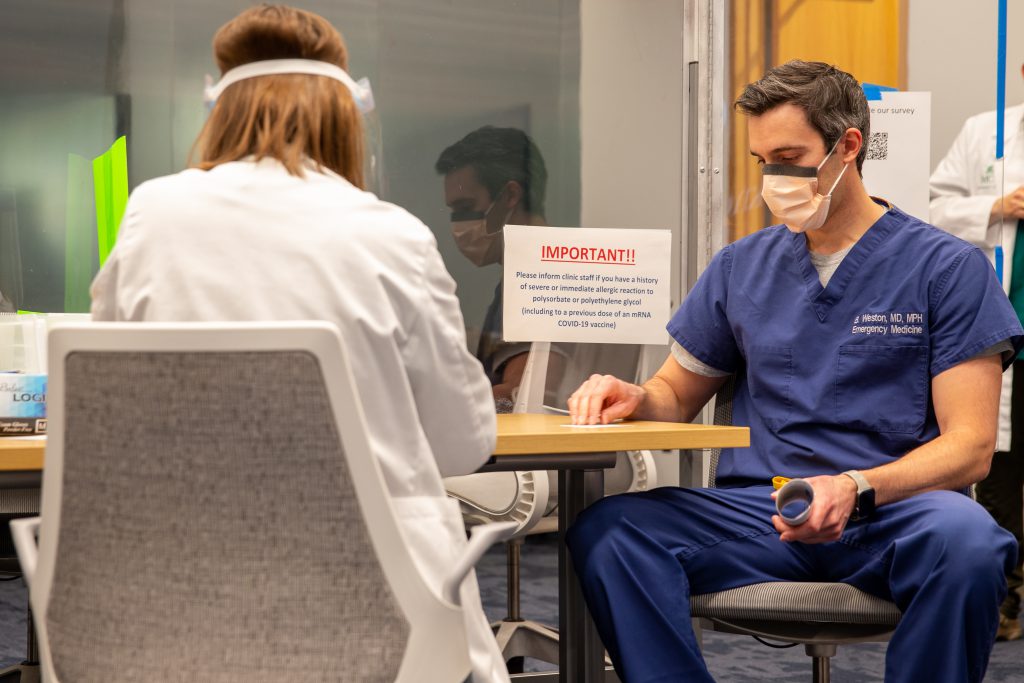 The Wisconsin Department of Health Services (DHS) is preparing for the next phase of COVID-19 vaccinations, which is scheduled to begin as soon as next week.

But top officials say the federal government needs to increase the state’s allocation of vaccine before they can move forward.

It has already been announced that firefighters and police officers will be a priority group for vaccinations in the next phase, called phase 1b. It’s estimated that the state’s population for this group is approximately 30,000 people.

On Tuesday morning, the committee that is determining the next phase of priority vaccination — the State Disaster Medical Advisory Committee — met and approved a final draft recommendation of phase 1b eligible groups to be submitted for public comment.

The first group on their list is people aged 70 or older, as they make up 71% of deaths and hospitalizations in Wisconsin. The state estimates this group consists of more than 682,000 people.

The next group is people that are recipients of IRIS or Family Care, which are state programs for frail or elderly people and adults with intellectual or developmental disabilities. This group is estimated to have 40,000 to 50,000 people, and people in this group tend to have multiple co-morbidities, according to the committee.

Another group that will likely be included in Phase 1b is the staff and residents of congregate living facilities, which is estimated at 237,902 people.

Also included are public-facing and frontline essential workers. Along with fire and police personnel, this includes approximately 160,000 educators in K-12 and higher education and childcare workers, 25,000 non-frontline healthcare workers and also 300 people that work in Mink Husbandry.

The last group was added to the list because outbreaks across the planet associated with mink husbandry have displayed genomic changes in the virus that “pose a biosecurity risk for the current vaccine campaign,” the committee said. Vaccinating people that work in mink husbandry will reduce the possibility that mink-related mutations in the spike-protein of COVID-19 will spread and weaken the effectiveness of the vaccine.

It’s estimated that the state’s population of police and fire personnel is approximately 30,000 people.

The state has said Phase 1b will begin Monday, January 18th, and DHS deputy secretary Julie Willems Van Dijk said the population that falls within the second phase will be approximately twice the size of the first phase. The “key to accelerating” vaccination, she said, is simply more vaccine.

On Friday, Governor Tony Evers joined seven other Democratic governors in a letter calling for more vaccines from the federal government.

The federal government has been allocating vaccine based upon state population and Wisconsin has a high proportion of people that fall under the first priority phase of the vaccination regimen relative to its state population, Willems Van Dyke explained during a press briefing Monday.

The entire vaccination process from allocation to distribution and finally administering it to patients, is very complex, said the DHS secretary. Each week, the department sends out a survey to approved vaccinators asking how many doses they estimate they will administer in the following week. That data is supplied to the federal government, which then allocates the vaccine to the state.

The Moderna vaccine is more stable than the Pfizer/Biotech vaccine, and does not require the super-cold temperature. The Pfizer vaccine, once thawed out, must be used within five days. This, Willems Van Dijk said, has contributed to some people outside of the Phase 1a designation getting the vaccine in order to prevent spoiled vaccine being lost.

So far, the state has not lost any vaccine using this approach. Though, at Aurora Medical Center in Grafton, a man was caught purposely leaving out 500 doses of the vaccine to intentionally spoil them.

More than 163,371 doses have been administered. As of Monday, more than 11,500 of those were second round doses — people that have completed the vaccination process.

The majority of the vaccines that have been administered are Pfizer vaccines, though last week there were several days where the Moderna vaccine was the most administered in the state.

Willems Van Dijk said that the state needs to increase the pace of vaccination, reaching levels as high as 30,000 to 50,000 doses a day, in order to “get us quicker to the goal of getting 80% vaccinated.”

“We’re building the system,” she said, for Phase 1b and for the administration of more vaccine. But the biggest challenge remains, she said: “We need more vaccine to get vaccine into arms.”

One thought on “State Prepares for Next Phase of Vaccines”