Brady Street Area Has Many Delights

It’s a great urban walk, filled with Polish and Italian history and so much variety. 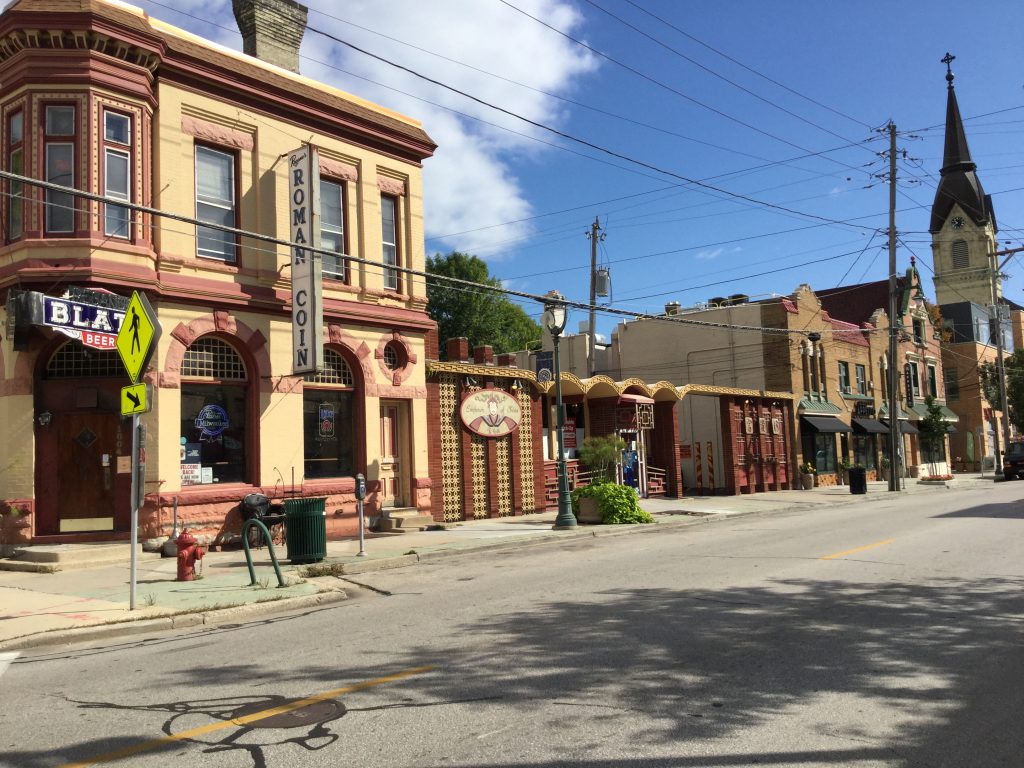 Distance: 1.5 miles|
Start: Walgreens at the corner of Brady and Farwell.

Start this walk at the strip mall anchored by Walgreens, neither interesting nor historic, but necessary. Every neighborhood needs or should have a place to grab a bottle of water, a roll of toilet paper, laundry detergent and some emergency Aleve.

Before you begin walking, take a long view of Brady, a jumble of architectural styles, most built between 1870 and 1930. It was main street for Polish immigrants who modeled it after their villages in Poland. Note how the street is a study in diversity, a tapestry of shops, bars, restaurants and cafes. It has also earned its reputation as a center of hippie funk. When the weather is warm you might see a busker or two with a guitar or a horn, and a bucket for your spare change, or an enthusiastic group at the corner of Farwell and Brady holding signs devoted to their cause.

There’s confusion regarding the naming of the street. Some claim it was named after a prominent New York lawyer, James Topham Brady, while others insist Brady was a Chicagoan named George who may have been involved when the neighborhood was platted.

The street’s history starts with the arrival of the Polish who came from Kaszuby in the 1860s. They transformed Brady from a swamp at the edge of the city to the residential and commercial center of their lives. They were poor working-class Poles who came for jobs as industry expanded along the Milwaukee River with tanneries and ice houses, potential employers for the newly arrived. These notoriously frugal Poles built small, usually four-room houses, sometimes two or three on a single lot, and invented what became known as “Polish flats.” They raised the frames of their houses with wooden posts and built half basements underneath, more room for expanding families or perhaps additional rental income.

Many of these Poles worked in the tanneries along the river, ugly jobs, working with hides and corrosive liquids in the midst of a constant stench. No wonder they built their own church, St. Hedwig’s, a refuge from their hardscrabble lives, and a place to listen to the sermon in their own language. They built the first St. Hedwig’s in 1871 at the corner of Brady and Franklin for $11,000. In 1886 they replaced it with the church at Brady and Humboldt, known for its 162-foot steeple that towers above the neighborhood.

Thanks to their work ethic and thrifty lifestyles, the Poles pulled themselves out of poverty by the turn of the century. With their new wealth, they migrated across the river to Riverwest, or, if they could afford to go further, they settled in the northern suburbs, Shorewood or Whitefish Bay, desirable communities as early as the 1890s.

In the 1930s the Italians arrived, so many that for a while the neighborhood was known as “Little Italy.” The Brady neighborhood remains heavy with Italians as evidenced by Glorioso’s, Fazio’s and Sciortino’s.

When the hippies came in the 60s, Brady became a center of counterculture, the place to get a fix — of weed, coke, or something stronger. It became known as the Haight-Asbury of the Midwest, a well-deserved reputation.

The downfall took 20 years. By the 80s blight had set in. Heavy drinking and partying left a recognizable unpleasant aroma in the gutters, especially pungent on weekend mornings. In the early 90s, a renaissance, led by local resident Julilly Kohler, started the rebirth we see today. Now Brady, lined with restaurants, bars, shops, expensive apartments and high-end condos, has flipped its reputation and reinvented itself as a desirable neighborhood for people who want to live and play close to downtown.

Home values have soared. A residence purchased for $37,000 in 1994 is valued today at more than $200,000. Tear-downs brought apartments, duplexes, condos, and raised both property values and property taxes. Like many Milwaukee neighborhoods, Brady has come a long way from its humble roots and those thrifty Poles who settled north of the Milwaukee River hoping to find a better life.

Now let’s begin that walk. When you leave Walgreens and head west, the first building you encounter houses a fast food franchise restaurant QDOBA, and nearby, Jimmy Johns, interlopers that popped up to the dismay of some locals who would prefer to keep Brady franchise-free.

In the five blocks from Farwell to Astor, a cornucopia of services lines the street, including hair salons and a tattoo parlor, a display of diversity that showcases Brady’s exuberant personality. Here are a few others you will encounter: a liquor store; a place to cash a check and across the street classes for people who want to practice Jujutsu; shops to purchase CBD, smokes and vapes; a pet food store; and a shop for a fancy futon. You can get your shirts cleaned and pressed; imbibe at one of several bars; drop into an escape room; and for veterans, there’s Dry Hootch.

In those same five blocks, some 20 restaurants vie for your attention, but don’t get too attached, because they come and go. Here’s a sample of the choices you will discover as you stroll the street: all varieties of hot dogs; burgers, fancy or not; Italian cuisine; tacos and burritos; ice cream; seafood; German wursts; authentic Greek food; empanadas; world cuisine; small plates; outstanding Chinese; Thai; the original Brewed Cafe where every bite is made from scratch; and Mac Shack the perennial “Coming Soon” restaurant at the corner of Brady and Humboldt.

Pause at the southwest corner at Humboldt where Art Smart’s Dart Mart & Juggling Emporium has attracted shoppers looking for strange and sometimes raunchy stuff since 1985. Across the street at Sciortino’s, hard rolls are the attraction as well as their multiple varieties of Italian cookies. Continue down Brady past Glorioso’s Appetito, a small bakery and cooking school that opened in 2019 at the site of the original grocery store, established by Joe Glorioso in 1946. Across the street, the expanded Glorioso’s, at the site of the former Brady Street Pharmacy, offers a deli, a wine shop, and a grocery store filled with Italian staples and delicacies. It’s been rumored that a request for the recipe for their popular meatballs is a lost cause. If you purchase these meatballs in the deli, or in a sandwich, you could dissect one and attempt to reconstruct that sturdy meatball filled with secret Italian flavors.

From here, travel north on Astor, turn right on Hamilton past Pitch’s known for BBQ ribs, and turn right once more on Pulaski. At the bend, note the Cream City brick building at 1729-31. It’s a bland boxy building until you notice the leaded glass window on the first floor.

Retrace your steps on Pulaski down the hill past a small playground and Wolski’s Tavern, known for free popcorn, a pool table, dart boards, and the “I closed Wolski’s” bumper sticker. Turn right on Kane and look across the street where you’ll see a contemporary box, a strange looking home covered with vertical brown louvered siding. As you ascend the hill on Kane, note the various states of upkeep and restoration on these two blocks.

At Warren, look straight ahead to a lineup of vintage homes. The Cream City brick duplex at 1900-02, used to be the rectory of St. Hedwig’s Parish. The thrifty Poles even recycled buildings; when the parish built a new rectory on Humboldt, they sold the original and moved it to Warren Street.

That Polish thrift extended to a raffle they used to collect money to build the new St Hedwig’s. When they outgrew their first parish school in 1879, they raffled it off for $1.00 a ticket and raised $400 for the new parish. Mr. Francis Miszewski, the lucky winner, sold the school to Mr. Joseph Polczynski, who moved the school to the northwest corner of Brady and Arlington, encased it in brick veneer, and opened a saloon. Since 1998, the Hi Hat Lounge and Hi Hat Garage, saloon and restaurant, have occupied the corner.

Turn left on Warren and follow it to Boylston Street and Caesar’s Park overlooking the Milwaukee River. Below the park, the North Avenue Dam built in 1840 and removed in 1997, formerly divided north and south on the river. To the south were sawmills, breweries and tanneries, while the north banks were lined with swimming schools, canoe clubs, and amusement parks.

Concrete steps lead to the river where, thanks to the River Revitalization Foundation, an urban walkway takes walkers north and a pedestrian walkway at the site of the former dam spans the river to connect the Brady neighborhood with Riverwest. If you choose to linger here, it’s a fine place to watch an urban sunset reflected in a city river.

From Caesar’s Park, a short walk south on Cambridge leads back to the beginning at Walgreens, the end of this walk and a sample of the gentrifying Brady neighborhood 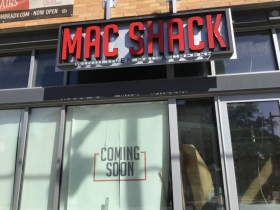 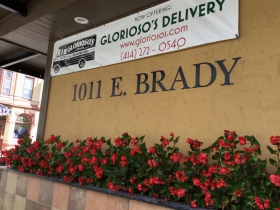 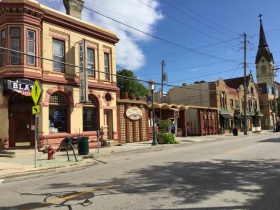 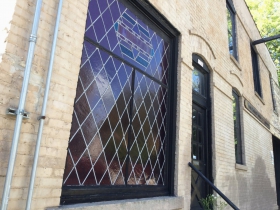 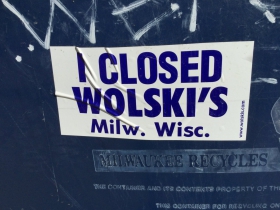 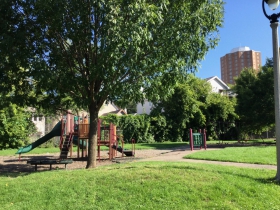 2 thoughts on “Milwaukee Walks: Brady Street Area Has Many Delights”