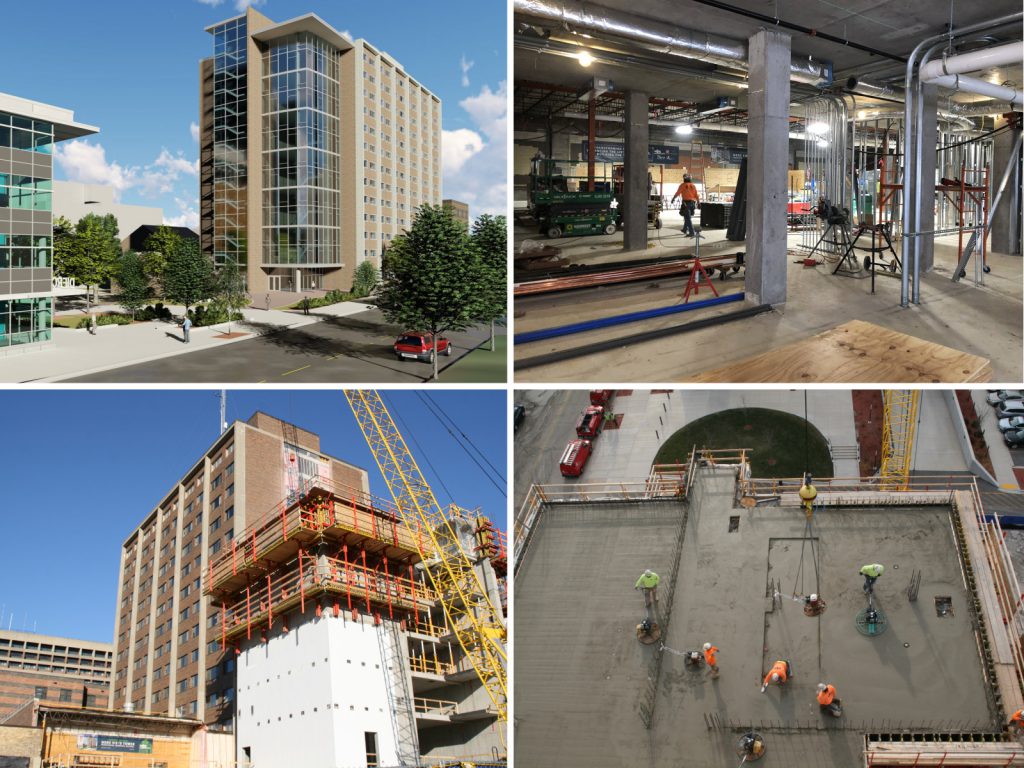 Former residents of Milwaukee School of Engineering‘s Roy W. Johnson Hall will find little they recognize once the university completes its redevelopment of the 13-story building into Viets Tower.

Led by general contractor VJS Construction Services, the building at 1121 N. Milwaukee St. has been effectively stripped to its frame while a concrete-and-glass addition rises on its southern facade.

The $37 million final product will transform MSOE’s oldest residence hall. New rooms will increase housing capacity from 450 to 546 units, while added amenities include two-story study spaces, air conditioning and more bathrooms. Each window is being replaced with one that will bring in substantially more light. The entire first floor is being completely reimagined.

MSOE president John Y. Walz called the existing tower “tired” in 2019 when he announced the project, which is being named after his predecessor, the late Hermann Viets. As a former resident of the building (2005-2007), this author thinks “tired” is a generous description.

The revamped tower is scheduled to open to students in August, which has dozens of workers from VJS and other subcontractors working steadily to complete the project.

We toured the building earlier this month, with VJS assistant project manager Mike Moennig pointing out the seemingly never-ending list of improvements, many building code related, being made to the 55-year-old building.

The changes are notable the minute you walk in the front door. What was a small lobby is being rebuilt and an unused third elevator shaft (subject to campus rumors that it was filled with concrete to keep the building from tipping over) will finally be used. Moennig said no concrete was found in the shaft, it was simply empty. So why use it now? “Safety, that’s the main reason,” said Moennig. The new elevator will be able to hold a stretcher.

A first-floor cafeteria, open to residents of all residence halls and located in an annex structure behind Johnson Hall, was demolished. The space will be used for classrooms and collaboration spaces open to all university students.

“This living-learning community will be designed to support MSOE’s hands-on, application-oriented approach to learning,” said Walz in announcing the project.

The 12 floors above formerly contained a loop of exterior-facing rooms with shared, interior restrooms and showers. The large restrooms are gone, to be replaced with a smaller accessible, unisex restroom, while new restrooms and showers, with more privacy, will be located in the addition. Part of that former restroom space will become a hallway kitchennette for residents. Other space will be absorbed by mechanical and information technology infrastructure.

The original design has a windowless hallway looping around each floor with no excess space near the elevator landing. But the redevelopment will create a small gathering space and two new room layouts. “We took three bedrooms and turned them into two [Americans with Disabilities Act]-compatible rooms,” said Moennig of the plan that rotates the room orientation near the elevators by 90 degrees. The hallway will also gain natural light with the southern addition expanding the loop.

The addition is intended, in part, to encourage more collaboration and socialization between floors. A two-story study area, with staircase, will connect floors. Each floor will also receive restrooms and additional bedrooms.

Wall-mounted, ductless air handling units will replace the much-larger radiator units that lined the wall under the in-room window. The new units, using a glycol refrigeration system that circulates in pipes through the entire building, will be able to provide both heating and cooling. Energy efficiency improvements are being made, including insulating the north wall where much heat loss occurs.

Many layers of paint are being carefully stripped, given that some of the layers are believed to contain lead-based paint. This includes those layers covering the original door frames, which will remain.

New conduit lines run virtually everywhere, growing from six per floor to over 100, a change which Moennig attributes to building code changes and IT demands in a modern dorm.

The building’s roof was replaced as part of the project as were many other rooftop components, including harnesses for window washers to hang from. The equipment room for WMSE 91.7FM is also getting an upgrade. The radio station uses the building’s roof for its broadcast antenna.

The roof also affords a top-down view of the addition’s construction, where we were able to observe a crew smoothing out one of the new floors. The new floors are being added over an approximately two-week period.

The roof structure of the one-story cafeteria structure was also replaced. The work shed more light on one urban legend: that a keg was thrown out of a residence hall window many decades ago. Moennig said some damage consistent with the impact and shape a falling keg might cause was found in the roof structure.

Viets Tower is being designed by Ramlow/Stein Architecture + Interiors. The original building was designed by Charles Nagel & Associates as part of a campus master plan by Fitzhugh Scott.

Mayor Henry Maier attended the August 1964 groundbreaking for the building and said it was a sign of a strengthening central city. “This building will enhance the school’s already fine reputation as an institution of higher learning,” said Maier according to the Milwaukee Journal. Roy W. Johnson, for whom the building was named, was an MSOE regent and chairman of Controls Company of America.

Mayor Tom Barrett, only one elected mayor and two university presidents removed the from groundbreaking, also heaped praise on MSOE when the university announced the hall’s redevelopment. He called MSOE the “can do school” and a booster of Downtown. “When I think of the changes that have happened to MSOE in the last decade and a half, I’m having trouble remembering them all,” he said.

The attached, five-story Regents Residence Hall, built in 1990, will not be redeveloped as part of the effort. Students continue to live in the building this school year, as a one-story connector building was repurposed as an entryway.

MSOE suspended its residency requirement for second-year students to accommodate the temporary reduction in on-campus housing. The university reported a full-time-student enrollment of 2,462 as of fall 2020, including both its graduate and undergraduate programs.

And to retire one last urban legend, 1960s newspaper accounts always referred to the building as a 13-story structure, even before construction began. Campus rumors would have you believe the building was intended to be 24 stories tall, but that it had to be cut short after the building, supposedly designed by Marquette University engineers, started leaning during construction. The story is as untrue as the debunked idea of the concrete elevator.

One legend is true. There was a basement bar, but it was removed after the 18-year-old drinking age was raised to 21 in the 1980s. 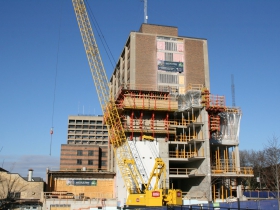 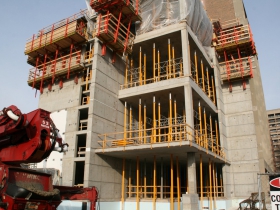 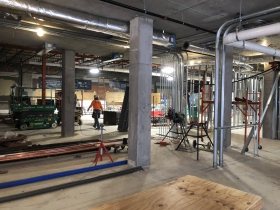 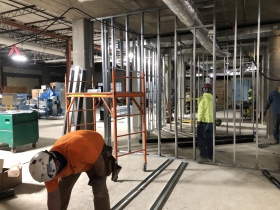 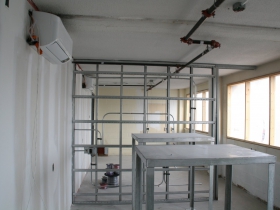 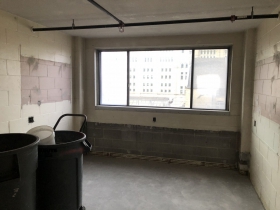 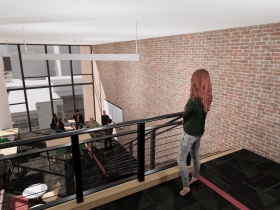 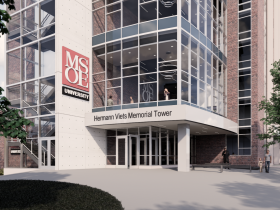 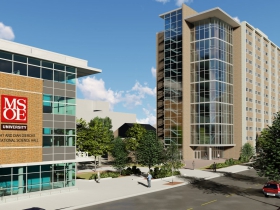 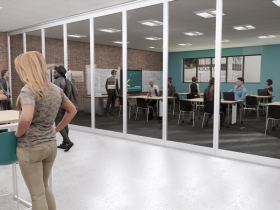 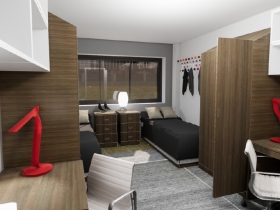 The redeveloped tower is just one of many things happening to the university’s physical footprint. South of the new tower, a new, $34 million computer science and artificial intelligence hall opened in 2019. The two buildings will be linked by a new plaza built atop what is currently a surface parking lot.

Immediately west of the computer science hall the historic German-English Academy was redeveloped into Direct Supply‘s downtown office, which directly connects the employer to the university.

Get a daily rundown of the top stories on Urban Milwaukee
The elimination of the cafeteria was offset by the redevelopment of the third floor of the university’s campus center facility at 1025 N. Broadway into the Robert Spitzer Dining Commons (another reference to a former university president). That project was completed in time for the 2020-2021 school year, including extra dividing walls and a mask requirement to adjust to the COVID-19 pandemic.

A new home for MSOE’s nursing program was constructed on the building’s first floor in phases over the past decade.

In recent years, the university also purchased a failed condominium project for use as a residence hall (Grohmann Tower) and opened Viets Field and parking garage on the northern edge of the campus. If you go back further, the university also added the Grohmann Museum (2007), which includes classrooms as well as art, and the Kern Center, an athletics and wellness complex (2004).

The never-leased commercial space in the Viets Field parking garage complex at the north end of the campus was converted to a science, technology, engineering and mathematics (STEM) center for K-12 students earlier this year.

Known as the WE Energies Stem Center at MSOE, the 10,000-square-foot space is intended to help broaden the university’s educational outreach programs with a focus on serving underserved students. MSOE reports more than 10,000 students from 150 schools have gone through its programs since 2017.