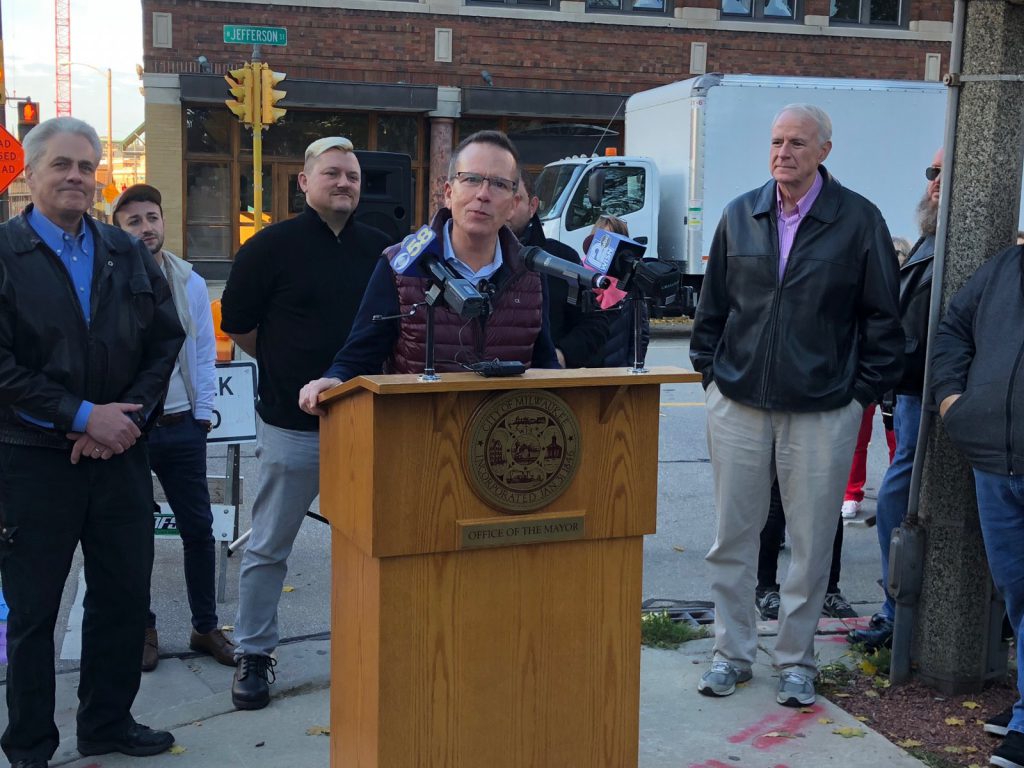 Tony Snell speaks at the 2018 unveiling of the rainbow crosswalks at Cathedral Square Park. File photo by Jeramey Jannene.

“The ERC’s mission is to promote and protect equality, equity, and human rights, through education, enforcement, and community engagement,” said Snell in a statement. “As chair I will not only continue the work we have begun, but further enhance our work to ensure that every single Milwaukeean and visitor has the support and opportunities that are necessary to live their best life.”

For the third year in a row, the city received a perfect score on the Human Rights Campaign’s Municipality Equality Index. Of the 506 cities that applied, 94 were given a perfect score this year.

“There is no doubt we are rolling up our sleeves, getting to work on the tough challenges and centering equity and inclusion in our city programs and projects. As underscored in the mayor’s directive and new Office of Equity and Inclusion, I’m excited about our future and the ERC’s role and partnership,” Snell said when the score was announced December 9th.

In addition to hearing complaints, the commission has worked in recent years on the city’s efforts to declare racism a public health crisis, designate Indigenous Peoples’ Day, add adaptive bicycles to Bublr Bikes fleet and develop an inclusive restrooms policy.

“This appointment comes as no surprise to anyone who knows Tony and his incredible work to make our city a fair and safe place for all, and we look forward to seeing that work continue on behalf of Milwaukee and its residents,” said VISIT president and CEO Peggy Williams-Smith.

Snell, who previously served as vice chair, replaces Chez Ordoñez. The former chair was dropped by Mayor Tom Barrett in October. Ordoñez, in September, was publicly critical of the lack of city funding for the board in an open letter entitled “I Don’t Have a Master.” Ordoñez had also engendered controversy when the Milwaukee Journal Sentinel reported on his $61,500 no-bid contract to provide marketing and communication services to then-Fire & Police Commission Executive Director Griselda Aldrete.

Snell was reappointed to the commission in September following a perfect attendance record in his first three-year term.