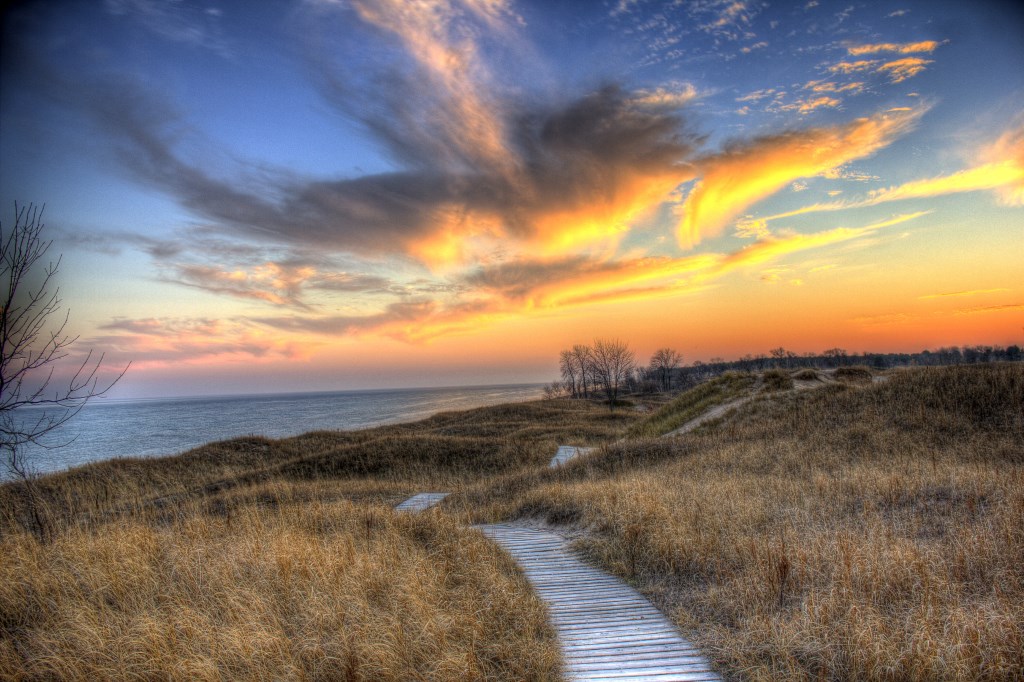 I have been writing for years about an effort to convert at an acknowledged expense to the environment writ large a privately-owned nature preserve in Sheboygan on the shores of Lake Michigan into an upscale golf course complex — an 18-hole course, clubhouse, maintenance building, parking lot and more.

Bad enough that the company says a permanent transfer of some public acreage within the very popular, adjoining lakeside Kohler-Andrae State Park is needed to make the private project work.

Much worse is that the Wisconsin DNR remains joined with the developer in a lawsuit that seeks to bar citizens (opponents of the plan have created “Friends of the Black River Forest” or FBRF) from challenging the land: The suit was described by an environmental publication:

The Kohler Company and the DNR have petitioned the Wisconsin Supreme Court to review a recent appellate court decision which affirmed the right of FBRF and citizens to challenge a state agency’s actions, particularly regarding the environment….
Kohler’s appellate argument claimed that FBRF and park users, were not harmed by the land swap of state park land because the land swap in itself did not mean a course would be built. (In order to bring a suit a plaintiff must be harmed by an action,  i.e. have standing). The appellate judgement found that the land exchange decision anticipated that Kohler Co. would construct a golf course and noted the impact of the decision on the Friends’ members.

So basically the state is arguing that the people can be barred from contesting the disposition of public land which is there for the people’s use — more than 400,000 annually, according to recent DNR records – and which, in this case, is park land literally within a stone’s throw of the people who have filed a legal contest.

What state park is next?

The golf course project presents many environmental, procedural and legal issues. Here is one helpful example that includes photographs provided by the park’s former long-time superintendent of some of the actual acreage inside the park – land that is integral to its design and function – which the golf course developer says it needs for a road, parking lot and maintenance building that it can’t find room for on the nature preserve site it wants to substantially clear-cut.

Public land which the DNR and its governing board are OK with transferring through a swap with the developer.

* I’m not anti-golf. I used to play when I was younger.

* And I understand that things change.

But it’s important to see the developer/DNR litigation’s connections to other events during the Walker years, including the state’s administrative end-run through an annexation to box out local opponents in the Town of Wilson where the nature preserve had long-been legally situated.

And let’s also note the DNR’s work on a separate wetlands permit that raised similar preservation issues that eventually helped knock out a controversial wetlands loss in Monroe County sought by a developer.

We expected favoritism in the application of and access to state power to be shown to businesses and influential individuals who wanted to acquire important public resources like groundwater, and even public lands for private use during the Walker years.

Here is another example from a few years ago that showed how this special privileged lane gets used:

MADISON (AP) — Wisconsin Department of Natural Resources officials have come up with a way to give a northern lakefront parcel to one of Gov. Scott Walker’s key donors that they hope will save them another round of stinging criticism.

The agency plans to give Elizabeth Uihlein the 1.75 acres along Rest Lake in Manitowish Waters she wants so her condominium complex will have lake access, DNR real estate director Doug Haag said Monday. Uihlein and her husband in return will give the agency 42.7 private acres the couple is close to buying within the Northern Highland-American Legion State Forest boundaries. The land includes 2,100 feet of frontage on Mann Lake, Haag said.

And if you read that and say, ‘well, the DNR, acting for the public, actually got lots of nice acres through the swap,’ you’re missing the point, which is: Who but a relative handful of well-positioned people or businesses are even able to make these audacious, self-serving proposals in the first place?

Remember that people and businesses who want to share their good fortune and properties with the public do it all the time through outright gifts or conservation easement arrangements, and the DNR manages the Knowles-Nelson Stewardship program which acquires land to blend into the public domain.

The Kohler-Andrae State Park land swap is the Stewardship program in reverse, even though it nets the DNR acres and a building not included in the park’s design.

* No one is picking on Kohler interests. In fact, the state already did them a pretty big favor when it helped finance and acquire land for a special interstate highway interchange for another Kohler golf course in Sheboygan County.

* And I know that Gov. Evers has been hamstrung by GOP moves which began even before he was sworn in, and that his opponents won’t let him manage the public health during a deadly pandemic, let alone even confirm his completely-qualified Department of Health Services Secretary forced to remain in ‘designee’ status for nearly two years.

So I understand that perhaps provoking another fight with his opponents is not what he wants right now.

But… It’s completely wrong on many levels that the DNR which is now freed from Walkerite management, and is now controlled by a Governor who has has repeatedly elevated conservation and science here and here and here, is continuing to participate in a lawsuit first brought during the Walker/Attorney General Brad Schimel era which validates their agendas while undermining the agency’s mission statement:

To protect and enhance our natural resources: our air, land and water; our wildlife, fish and forests and the ecosystems that sustain all life.

To provide a healthy, sustainable environment and a full range of outdoor opportunities.

To ensure the right of all people to use and enjoy these resources in their work and leisure.

To work with people to understand each other’s views and to carry out the public will.

And in this partnership consider the future and generations to follow.

Now maybe I’m missing something here – like an arcane legal procedure or requirement which requires a state agency to remain in litigation even if it originated under a defeated administration.

Is there a standard, a rule, a precedent, a law that requires state agencies – with their chests of taxpayer dollars at the ready – to follow prior decisions in lockstep no matter how flawed, no matter how often compounded while expenses mount for aggrieved taxpayers who have to fight the state to preserve what is already theirs.

It seems to me that the Evers administration was put into office by voters explicitly to assertively preserve public lands and defend citizen rights that were manipulated for private advantages during the Walker years.

Let me close with some words from former Kohler-Andrae State Park Superintendent Jim Buchholz who precisely identified in 2016 what was so wrong with the land deal and which continues to explain why the state should have removed itself from this mess and lined up with the public interest years ago.

The Dept. of Natural Resources has no right and nor any responsibility to “give away” 4-plus acres of publicly-owned state park land to anyone, especially to a “for-profit” business or person for the purpose of increasing the revenue of such business or to increase the income of any person or corporation…

If this is approved for Kohler, “ I “ would like to request and expect approval for my own 4 acres so I could set up my own business, perhaps a hotdog stand. Of course, like Kohler, I would have to ban park visitors from ever setting foot on my part of their public land again (unless they purchase one of my hotdogs of course).

This land transfer for private use should not be allowed regardless of the political involvement, DNR appointments and pressure from the Governor’s office. The DNR is supposed to represent the preservation and protections of all public lands. Park visitors should not have to be denied access to their public lands just to appease a large corporate donor to a particular party or person.

If so, all confidence is lost for this agency now and into the future.