Why All The New Cell Phone Towers?

5G towers are popping up across Milwaukee. The city has little power to determine where. 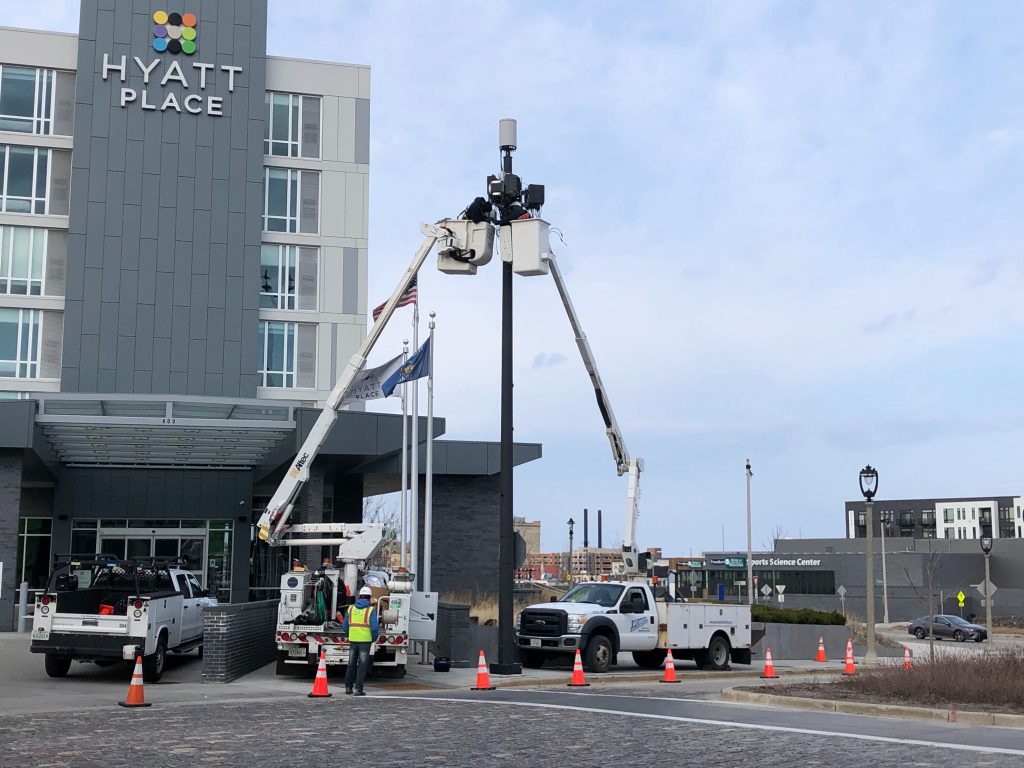 A crew installs 5G cellular equipment atop a utility pole in the Brewery District in April 2020. Photo by Jeramey Jannene.

The cell phone in your pocket is reshaping the urban environment. That could take the form of a new pole in front of your house, and neither you, nor your alderperson, have much control over it.

The buildout of a new, high-speed network known as 5G (for fifth generation) is well underway in Milwaukee. The network will offer speeds many times faster than the current 4G networks, a boon to video streamers, but a vexing problem for city officials.

The 5G network relies on a shorter wavelength that requires a much greater density of poles in urban environments. New small cell antennas, similar to an oversized coffee can, need to placed approximately 1,000 feet from each other with each cell service provider building out their own network. Each tower is wired into an underground network.

Work has been underway since 2017 to install the towers around the greater downtown area, and it’s now spreading into more residential areas.

The Department of Public Works has approved or received 1,700 permits in 2020 alone.

“We don’t have a ton of time to look at permits,” said DPW coordination manager Jerrel Kruschke to the Public Works Committee on Wednesday morning.

Moreover, federal and state regulations largely tie the city’s hands with regards to how it can regulate the process. Depending on the type of request the city has between 10 to 90 days to approve it. It isn’t allowed to discriminate with approvals based on the particular provider or to institute a moratorium. Companies must pay permit fees, but can freely place poles in the public right of way, which often includes the land between the curb and sidewalk.

Get a daily rundown of the top stories on Urban Milwaukee
“We do work with a lot of the wireless providers to work on colocation instead of putting up a new pole,” said Kruschke. That includes installing the antennas atop street lights or other existing utility poles, but the companies often don’t share poles with other cell service providers. “We also don’t allow [new] poles to be directly in front of resident’s windows.” But he said that doesn’t mean they can’t be seen from a window.

Alderman Jose G. Perez brought up a complaint from his district. A new pole was constructed next to a pocket park while vacant land along the freeway was available a block away.

“When permits come in, we try to direct them to avoid locations like that,” said Kruschke. But he said the city’s authority is limited. “We don’t have the ability to say you have to go two blocks down or three blocks down.”

“I think it’s important that residents know our hands are tied,” Perez said, and “that they have the ability to go directly to the state or companies themselves.”

“Where the line gets crossed is where the work is being done on people’s personal property,” said Ald. Mark Borkowski. Kruschke said the city does not permit work on private property and those property owners should raise the issue. The publicly-owned right of way often extends one foot past the high side of the curb, but varies by street, he said.

Ald. Russell W. Stamper, II said the issue he finds in his district is cleaning up after the job. Kruschke said the companies have 90 days to complete each job once a permit is issued. “It’s something we continually work on with the contractors themselves, getting that timeline for restoration shortened,” he said. Temporary asphalt is used with city permission to maintain pedestrian access while work is underway.

Even if DPW can convince the companies to co-locate on existing city infrastructure, Trump-appointees on the Federal Communications Commission have struck down some of the benefit. The city previously charged $1,800 annual rent per pole usage, a rate in line with many other large cities. FCC regulations lowered the maximum rate to $270. The FCC said the move will save cell phone providers $2 billion on their $275 billion network buildout.

The city is not alone in its struggles with tower placement. Milwaukee County is grappling with how to deal with towers in parks.

Given that you’re dealing with the visual blight of 5G infrastructure, how can you take advantage of the benefits? You’ll need a new phone and a service plan that includes access to the network. Existing phones, including those from AT&T that say they’re connected to the “5Ge” network, cannot access the new network.

One thought on “Eyes on Milwaukee: Why All The New Cell Phone Towers?”