County transit system also holding an annual tribute to parks on all buses. 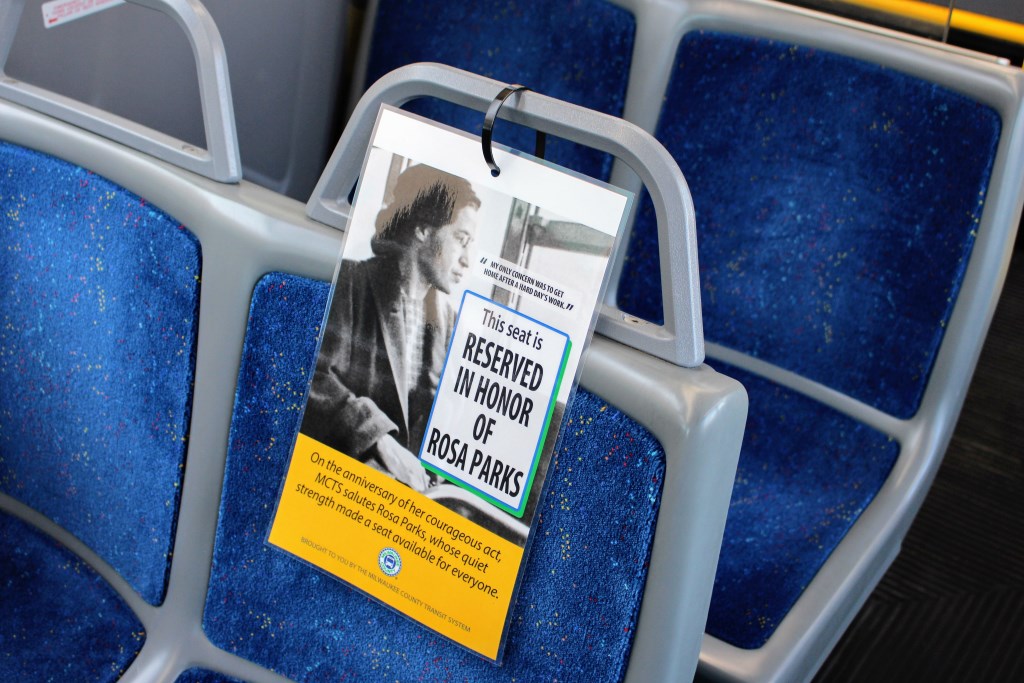 If you find yourself on a bus today, or in the next two days, you may notice an empty seat with a single red rose.

This is an annual tribute the Milwaukee County Transit System does to honor the legacy and courage of Rosa Parks. In 1955, Parks famously refused to give up her seat on a Montgomery, Alabama public bus for a white person and was arrested. Her arrest was a catalyst for the Montgomery Bus Boycott, and as Donna Brown-Martin, director of the Milwaukee County Department of Transportation put it, “Her small act of civil disobedience led to a landmark Supreme Court ruling that outlawed segregation on public transportation.”

“I know that we stand on the shoulders of giants like Rosa Parks and the civil rights generation who ran the risk that came with resisting Jim Crow and segregation,” County Executive David Crowley said during a press conference Monday. “We all have a responsibility to honor their sacrifice and never forget the act that they took to make this country live up to its promises.”

The rose isn’t the only dedication to Parks this year. MCTS also announced the Rosa Parks Tribute Scholarship. High school seniors in Milwaukee County planning to attend a university, college or trade school are encouraged to submit an essay to MCTS by January 8th inspired by Parks’ quote: “Each person must live their life as a model for others.”

The transit system will pick three winners who will each be awarded $1,000 towards their education. For details on applying, visit this page.

“The scholarship honors the past while also making sure that we invest in the next generation of leaders who will continue in this tradition of folks like Rosa Parks,” Crowley said.

Milwaukee County Board Chairwoman Marcelia Nicholson said in a statement: “As we commemorate Parks’ historic act of refusing to give up her seat to a white man, I encourage everyone to heed her call to live your life as a model for others and take action to make our community more respectful, inclusive and safer for all.”

The chairwoman noted that the county is “leading by example,” having declared racism a public health crisis.

Jeffery Roman, director of the county’s Office of African-American Affairs, said his office is well positioned to carry on the county’s mission of achieving racial equity, as it is “committed to centering the voices and experience of communities who have been historically disadvantaged, especially Africans-Americans and other Black and Indigenous and People-of-Color Groups.”

In light of this, Roman said he was proud to join the transit system to celebrate Parks’ “paramount legacy of breaking barriers” and noted that transit itself can play a role in advancing racial equity, just as Parks used it to battle racial segregation 65 years ago.