“America” Is Still Timely and Fun

The ultimate song about immigration, from ‘West Side Story’, is so smart and sassy. 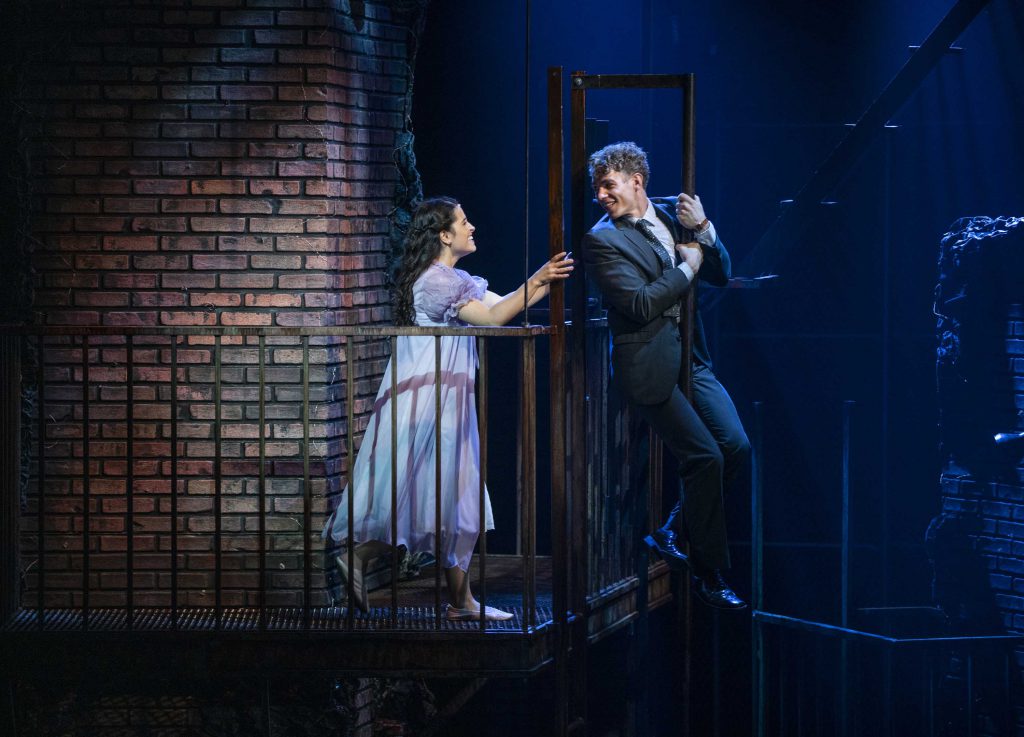 West Side Story was presented by the Milwaukee Repertory Theater in 2019. Left to right: Liesl Collazo and Jeffrey Kringer. Photo by Michael Brosilow.

America’s two gangs are slugging it out in the courts and polling places. Just like West Side Story… Yes, that’s the flimsy premise I’m going to use to talk about a song that has been rattling in my head lately. The Sharks, those Democratic champions of immigration, are waiting on the GOP Jets, currently in charge of Air Force One, to surrender the keys. Barring a constitutional crisis, this might actually happen. We may not come out of the rumble in one piece, but the Sharks win the best song contest — just listen to (and watch) them deliver the head-scratchingly cool “America” from the movie version of that play.

Written by Leonard Bernstein, with smart and sassy lyrics by Stephen Sondheim, it’s high-brow, low-brow and just plain fun. You can’t claim it’s predictive, it’s more a case of a country so unwilling to change that the old songs still fit. The battle between the Puerto Ricans and New York white boys, played out in violent choreography, is raging today with the MAGA gang (all bad dancers) trying to demonize people of color.

The high-brow element is hard to ignore, having been baked in by two sophisticated denizens of the classical world (Bernstein) and Broadway (Sondheim).  You wouldn’t expect them to dumb it down and they don’t. For instance — my research tells me this song is simultaneously in two time signatures, 6/8 and ¾. I don’t know how that’s possible, it sounds paradoxical, like Schrodinger’s Cat. Of course prog-rockers Emerson, Lake and Palmer covered the song, cementing their reputation as a band nobody would dream of dancing to. But the original cast can dance, and must have worn down a fair share of cuban heels learning to hit the beats and off beats.

The sharp choreography is by Jerome Robbins, who conceived the whole Romeo and Juliet update and also directed it. It was Fosse before anyone had heard his name. Fingers snap, hands clap and the sinuous frames strut and tease; the athleticism of the dancers is something to behold. They look like they should’ve been playing professional sports, which might have been easier.

Song for song, West Side Story is surely one of the greatest musicals ever produced. There just aren’t any clinkers. “Maria,” “Something’s Coming,” and “Tonight,” are all well-known standards. “I Feel Pretty” is something most anyone can whistle and “Cool” should be every gang’s theme song. In “America,” the lyrics are a clever dialogue between the Puerto Rican girls, who assume the pro-America stance, and their boyfriends, who take a more measured view, bringing up little bugaboos like racism and poverty. It’s a nice comic moment in a play a lot of investors considered too depressing to sink money into.

BERNARDO
For a small fee in America.

ANITA
Buying on credit is so nice.

BERNARDO
One look at us and they charge twice.

ROSALIA
I’ll have my own washing machine.

JUANO
What will you have, though, to keep clean?

ANOTHER GIRL
Cadillacs zoom in America.

ANOTHER GIRL
Industry boom in America.

BOYS
Twelve in a room in America.

BERNARDO
Lots of doors slamming in our face.

ANITA
I’ll get a terrace apartment.

BERNARDO
Better get rid of your accent.

ANITA AND THREE GIRLS
Life can be bright in America.

ALL BOYS
If you can fight in America.

ALL GIRLS
Life is all right in America.

ALL BOYS
If you’re all-white in America.

(an interlude of WHISTLING and DANCING)

ANITA AND CONSUELO
Here you are free and you have pride.

BERNARDO
Long as you stay on your own side.

ANITA
Free to be anything you choose.

ALL BOYS
Free to wait tables and shine shoes.

ANITA
You forget I’m in America.

(An interlude of MORE DANCING)

BERNARDO
I think I go back to San Juan

ANITA
I know a boat you can get on.

BERNARDO
Everyone there will give big cheer!

ANITA
Everyone there will have moved here.

Maybe it’s the triumph in this song that keeps it knocking around my brain. As earworms go, it could be worse. Our win over the forces of evil was tamped down by the foot dragging and glacial pace of counts and recounts. So this is probably my personal fireworks celebration, something I can pump my fist to… if I ever get that cadence down.

Assuming there’s still an America 50 years from now, will today’s warring factions be made over into dancing gangs in sharp suits armed with nothing more dangerous than insults? Will all this partisan acrimony ever be entertaining? Anything can happen in America and it usually does, so just get me to January 20, 2021 and we can take it from there.

One thought on “Sieger on Songs: “America” Is Still Timely and Fun”