COVID-19 cases rising too fast, state would need 20-fold increase in tracers to keep up. 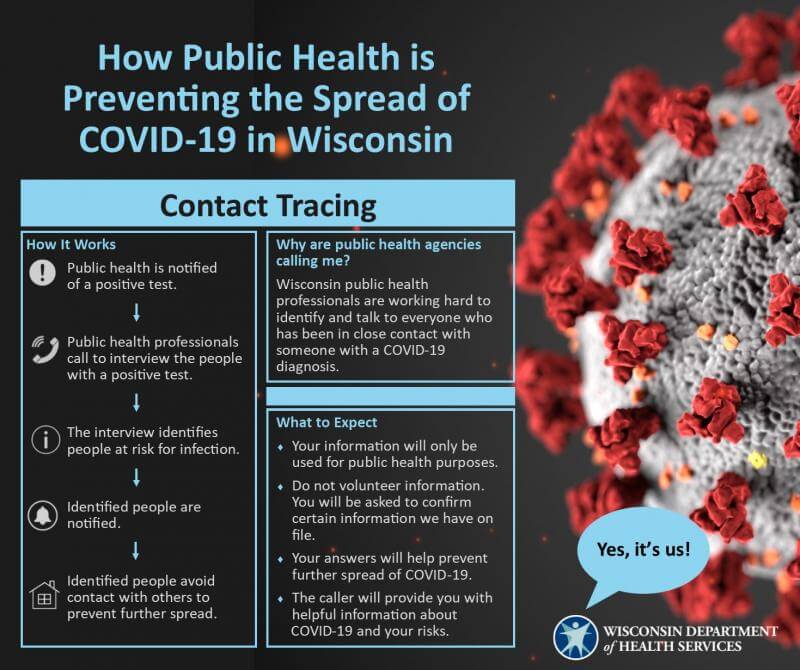 As coronavirus infections continue to skyrocket in Wisconsin, the state’s contact tracing efforts have fallen further and further behind.

Between local and state contact-tracing teams, the number of people involved in this critical element of controlling the spread of communicable disease is less than 5% of what outside organizations say is necessary for a robust contact-tracing program.

State health officials acknowledge that they are overwhelmed and discount the possibility of catching up with the current rate of COVID-19 cases. Instead, their focus is on persuading people to change their behavior to reduce the spread of the virus.

“Our goal is to eliminate the need for more contact tracers so those that we have aren’t overburdened,” says Jennifer Miller, spokeswoman for the state Department of Health Services (DHS). “We do that by doing our part to stop the spread of the virus and all that involves.”

Contact tracing involves asking people who test positive for the virus with whom they have been in close contact during the time that they have been infected. The tracing team then contacts all of those exposed people.

By identifying and reaching out to the people exposed, contact tracers can help prevent the further spread of the virus, says Ed Salsberg, a researcher with the Milken Institute School of Public Health at George Washington University in Washington, D.C. The exposed people can be instructed to quarantine and seek testing for the virus. “Taking themselves out of circulation is an opportunity to slow the spread,” Salsberg says.

For nearly a month, however, Wisconsin’s COVID-19 surge has been so intense that contact tracers have found it impossible to keep up. By the third week of October, DHS officials were acknowledging that tracers were often unable to take the time to call everyone exposed because all their time was taken up just connecting with the people who had tested positive.

These conditions have made the state’s contact tracing efforts even more difficult.

Contact tracing has been falling behind for months. In late September, following the surge that began on college campuses and then spread throughout all other adult age groups, individual county health departments were becoming overwhelmed.

But even months earlier, bottlenecks were showing up. An email message July 27, included among records that the Wisconsin Examiner obtained in an open-records request of Public Health Madison & Dane County, refers to a state backlog “for some close contacts as far back as 7/20.”

DHS launched a project to hire 1,000 contact tracers in the spring while later pivoting its target to include the entire state’s contact-tracing workforce, including at local health departments supported by state funds under the Coronavirus Aid, Relieve and Economic Security (CARES) Act.

Miller, the DHS spokeswoman, says the department set its original target for contact tracing staff based on a model from the National Association of County and City Health Officials (NACCHO) that called for 50 tracers per 100,000 population. For Wisconsin, that would have meant getting to about 2,800 tracers statewide.

Miller says DHS still has a goal of bringing its contact tracing staff — employees who  are offered as surge help for local departments around the state — to 400. But employee turnover, which is just over 30% for the DHS tracing staff, has challenged that goal.

“Contact tracing is very hard work,” says Miller. “Many of our contract tracers thought they were coming on board just to do contacts and then learned we needed them to do disease investigations, which are much more complicated. They have also have to talk to people who are very sick, who have been recently hospitalized or even who have just lost a family member.”

Even if DHS were to reach the original goal of 50 tracers per 100,000 residents of Wisconsin, however, it would still be well short of what two national projects say the state needs based on its current COVID-19 caseload.

A formula used by the George Washington University Institute for Health Workforce Equity calls for 38,950 contact tracers in the state. A similar formula from COVID ActNow, a consortium of health, epidemiology and technology experts from Harvard, Georgetown and Stanford universities, calculates the state’s target number of contact tracers at 34,425.

Neither number seems likely to be affordable under the state’s budget, with or without new federal relief.

A spending breakdown that accompanies a legislative proposal that Gov. Tony Evers sent to Republican legislative leaders this week says it would take $36 million just to cover the cost of current contact-tracing personnel in the state through April 1, 2021, once federal CARES funds that cover those positions ends Dec. 31.

On Tuesday, apparently in response to Evers’ draft legislation, Assembly Speaker Robin Vos unveiled some ideas for new Wisconsin coronavirus relief, but no bill of his own. The Vos suggestions include unspecified funds that would double the state’s contact tracer workforce with a focus on county and municipal health departments.

Even if that goal were achieved, it would be just a fraction of what the George Washington or COVID ActNow models call for.

“The reality is when you’re in a middle of a surge there’s probably no way that you could get the workforce you need to fully adequately address the need for contact tracing,” says Salsberg, the George Washington researcher, who was among those involved in developing the university’s contact tracing staffing model.

Making do under the circumstances

Contact tracing is more challenging when the community has fewer restrictions on gathering and mobility. If a community is shut down, “you might have two or three” potentially exposed people for every positive case of the virus, Salsberg says. “If it’s wide open, you might have 10.”

With Wisconsin cases rising by as many as 7,000 people a day, that means contacting 70,000 people in response to one day’s positive tests. “That’s nearly impossible,” he acknowledges.

There are some potential shortcuts. One ambitious model calls for following up with the exposed contacts not just to notify them of their exposure, but daily for several days afterward to check on how they’re doing and whether they’re reporting symptoms.

“In a lot of places they’ve automated that,” says Salsberg. The people identified as exposed through contact tracing receive regular emails or recorded telephone calls reminding them of symptoms that they should watch for.

Wisconsin’s do-it-yourself approach — in which people who test positive make the calls to the people who’ve been exposed to them — “wouldn’t be the first choice, but it is better than nothing,” he says.

For that system to work, it’s important that the person with the positive test who makes the call is able to accurately and completely inform the people who have been exposed about their need to quarantine and seek testing, he observes. It’s also critical that the exposed person understands that many people who wind up infected with the virus might not show symptoms right away — or at all.

“You need to point out to people, ‘You may feel OK, you may be asymptomatic, but you also may be shedding virus that can infect other people,” Salsberg says. They still need to quarantine, even if they test negative, and should consider seeking another test a few days later, he adds.

There is also a need  to understand differences in culture and socioeconomic conditions.

“It’s pretty easy for middle-class people who have large apartments or houses or white-collar incomes to stay home for two weeks, even if they’re asymptomatic,” Salsberg says. For people who have no other choice but to work, “it’s clearly a lot tougher.”

However overwhelmed the state might be, it’s important not to give up, he says, and to follow through on the calls that can be made to people who have been exposed. “If you only have staff that can do 10,000, you should do 10,000.”

It’s also no time to stop hiring contact tracers, he adds. “Even if people feel overwhelmed today, it doesn’t mean they shouldn’t be trying to expand their contact-tracing workforce,” Salsberg says. “When the numbers start to go down, that’s when, hopefully, contact tracing can get more in control.”