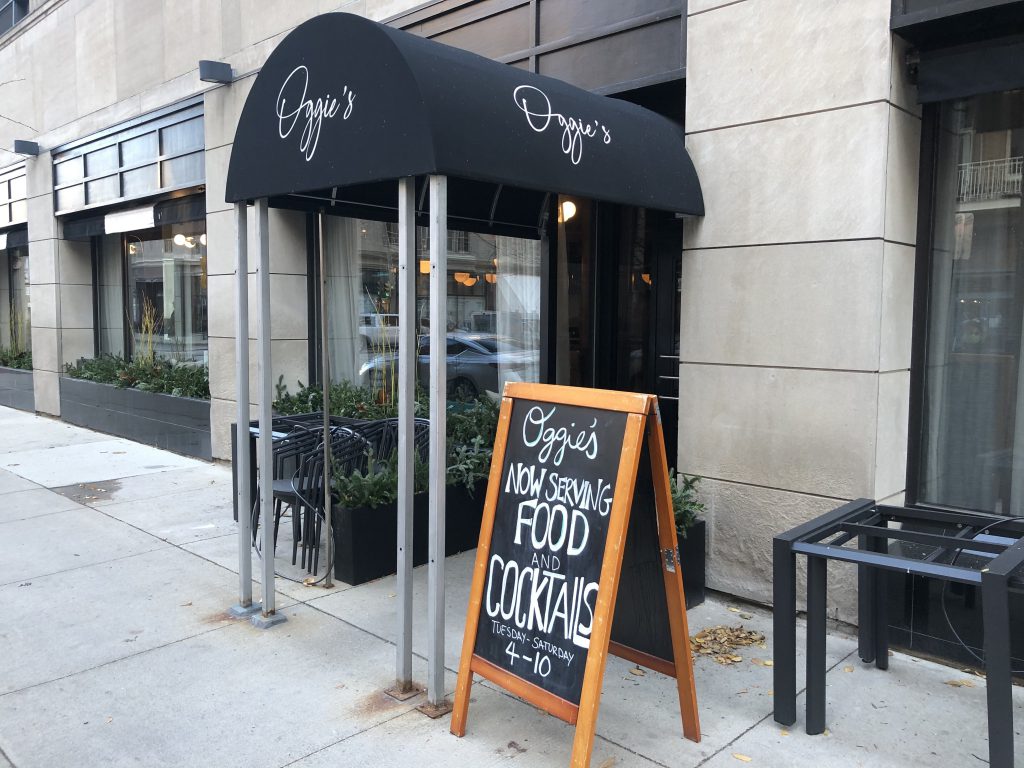 Earlier this year, Oggie’s, the new restaurant at the Hotel Metro  (411 E. Mason St.), shut down after only two weeks of operations, leaving chef Thomas Hauck and staff suddenly unemployed. The restaurant has now reopened, seemingly with a new chef and concept. This time around, the restaurant will serve seasonal small plates and sandwiches. The Journal Sentinel’s Carol Deptolla reports:

The menu is brief, taking the pandemic into account. It’s meant to go with the lounge’s wine, beer, whiskey and cocktails, like the That’s a Mole: mezcal, triple sec, lime and chocolate bitters ($12).

It has several meatless plates that can be shared over drinks: cauliflower croquettes with tarragon dressing ($9); onion dip and chips ($8); and roasted delicata squash with lemon and Parmesan ($6).

Sandwiches, served with pickle and chips, include meatballs with grilled green onion salsa and house-made ricotta on a potato roll ($14); Mom’s patty melt with caraway spread and sharp cheddar ($16); mushroom and butternut squash melt with braised kale and Gruyere cheese ($14); and the Oklahoma onion burger, two 3-ounce smash patties with Gruyere, crisp shallots and onion dip on a potato roll.

The full menu is online at oggiesmke.com. Takeout currently is by calling the hotel, (414) 272-1937. But third-party delivery services will be available starting next week, and Oggie’s will be getting a new number for takeout soon.

Oggie’s was part of a recently completed $4 million renovation of the hotel, which this year became part of the Marriott Autograph brand.

On Friday, Hooligan’s Super Bar, 2017 E. North Ave. the venerable east side institution, suffered a fire that took 45 minutes for Milwaukee fire fighters to get under control. Sophie Carson of the Journal Sentinel had the story:

No one was injured in the Hooligan’s fire, Deputy Chief Andrew Vossekuil said. He did not believe anyone was inside when it broke out.

Crews arriving on scene saw fire coming out of the roof, Vossekuil said. Firefighters entered the building to extinguish the fire but because of structural concerns, they exited quickly and fought it from the outside.

They eventually went inside again to finish fighting the fire.

The cause of the fire is under investigation, Vossekuil said.

Arlanderz Soul Food, a restaurant located at W186N9539 Bancroft Dr. In Menominee Falls, has opened a second location on Milwaukee’s East Side. The new restaurant, called Arlanderz Chicken & Fish East Side, is located at 1814 N. Farwell Ave. and held its grand opening on November 7. The owner and chef is Andre Horton, age 26, who has now opened two restaurants in five years.  Urban Milwaukee’s Graham Kilmer has the story:

His new location in Milwaukee was previously the Vietnamese restaurant Pho 43. The former owners left a message on their webpage dated January 31, 2020, that noted the closure and said “We are very sorry and would like to express our gratitude for the customer’s patronage since 2010.”

…Horton explained that he got into the food business because of the great feedback he was getting on his homemade hot sauce. In fact, he noted, one co-worker told him he needed to quit his job and pursue a business with his hot sauce.

So he started peddling his hot sauce, getting it into various grocery stores around the Milwaukee area. Then came the first Arlanderz, where you can order chicken covered in one of Horton’s sauces.

Looking at the Arlanderz website and the business application for the east side location, the restaurant does fried chicken and fish, chicken and waffles, pork chops smothered or fried, baked chicken and roast beef.

For sides, it has classics like fried okra, collard greens, sweet potatoes and corn bread. And for dessert, banana pudding and peach cobbler.

After some setbacks due to the pandemic, Supermoon Beer Company has its first two beers available to the public. The brewery, located at 3145 S. Howell Ave. In Bay View, first opened back in September with plans to eventually open a taproom. OnMilwaukee’s Bobby Tanzilo reports:

… (owner Rob) Brennan will be at the front door from noon until 7 p.m., Friday-Sunday, Nov. 20-22, for contactless pickup of bottles purchased online at Supermoonbeer.square.site or supermoonbeer.com.

You can also try your luck at walking up to buy beer directly during the same times, without pre-ordering, but supplies are limited and Brennan can’t guarantee availability.

Here are Supermoon’s first two beers, with descriptions from Brennan:

Deus Ex Forager is a mixed fermentation cherry beer; a blend of nine- and 11-month mixed fermentation farmhouse beers fermented and aged in French Oak barrels. Whole Door County Tart Montmorency cherries were added directly to the barrels one day after being harvested to referment the beer for six weeks. Bottle conditioned with Champagne yeast.

I tasted this one yesterday and it’s got about 7 percent ABV and a pale red hue with a nice head. The cellar funk is balanced with a pleasant and not at all cloying red Tootsie Pop overtone.

Many Phases is blended farmhouse beer. (Blend 001). It is a planned exploration of blended barrel fermented beers that will have a common thread but vary slightly blend-to-blend, highlighting interesting variations of rustic malt and wort structures, acid profile, barrel character, body and potentially dryhop finishing. This release is a blend of 12- and 14-month mixed fermentation farmhouse beers fermented in French oak barrels.

This one was a revelation, with apple and apricot notes and a forward oakiness. With a present but not overbearing funk and just 6.2 alcohol, it’s extremely drinkable.