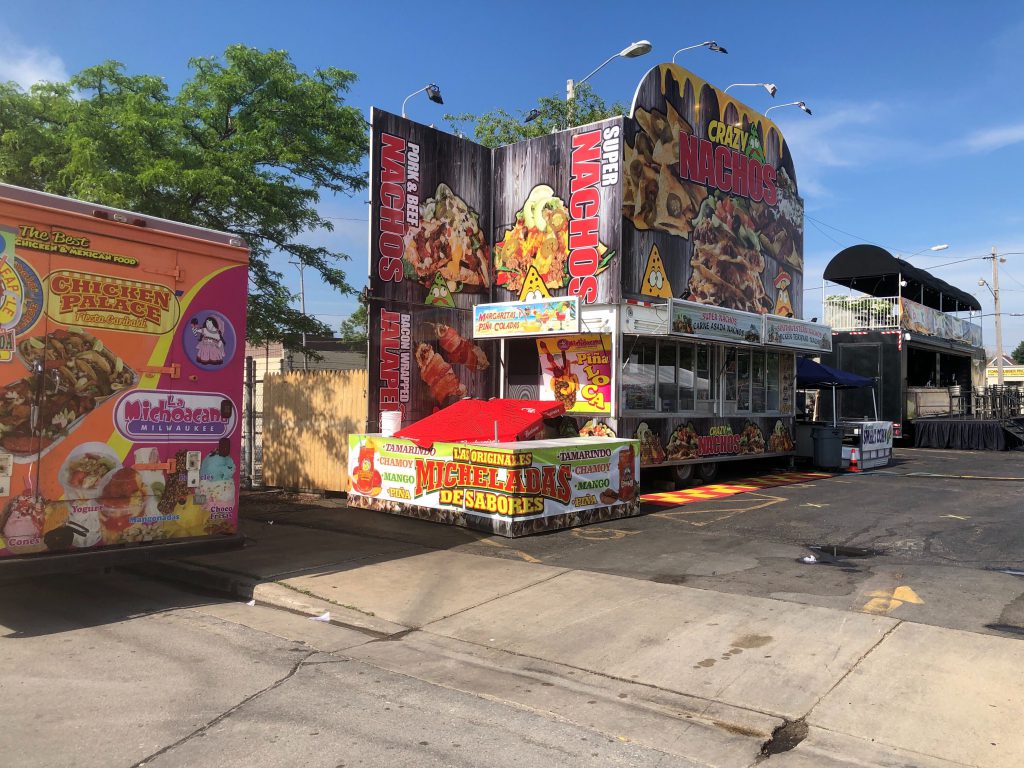 A nachos stand and two-story bar outside of Fiesta Cafe. The business was fined $1,500 for violations of the city’s COVID-19 health order. Photo by Jeramey Jannene.

The maximum fine a business can get for violating Milwaukee’s COVID-19 health order will grow from $2,000 to $20,000 under a proposal before the Common Council.

Businesses can currently be fined $500 each for violating mask wearing requirements, social distancing protocols or capacity limits. A city report lists a fourth category of “other” for additional violations of the Milwaukee Health Department‘s Moving Milwaukee Forward Safely order.

“I have heard from businesses in several sectors that the $500 amount is what they would make in an evening if they went beyond capacity limits,” said deputy commissioner Claire Evers to the council’s Public Safety & Health Committee.

Committee chair Alderwoman Marina Dimitrijevic is sponsoring the proposal to increase the maximum fine for each offense to $5,000. Evers said it would give the department the ability to levy citations that could total $20,000.

“The other option is there are some cities that have a complete ban on indoor activity,” said Dimitrijevic. Other states have instituted early closure rules shutting down bars at 10 p.m.

“Our belief is if the fine was higher it would be easier to get voluntary compliance,” said Evers.

Alderman Scott Spiker said the ordinance change didn’t automatically mean fines reach $5,000 per offense, but instead would range from $500 to $5,000 per citation. “What it really does is create a wider range,” he said.

“We are really hoping this increase will make a difference and make operators think twice before they risk it,” said Evers.

On October 22nd the city announced it would move from warning letters, having issued 62, to fines. “People are either with the program or they’re not with the program,” said Mayor Tom Barrett in announcing the policy change. At that point MHD had only fined two businesses.

“I don’t think we have issued any citations since we made that announcement,” said Evers.

Get a daily rundown of the top stories on Urban Milwaukee
“I am happy to say there were no new violations last week at any of the places our team went to,” said Evers.

Ald. Chantia Lewis asked the health department to make sure it is visiting her district on the city’s far northwest side.

“We should be going to all areas of the city,” said Evers.

Evers said the city is increasing the size of its inspection staff. “We have some fresh faces that I understand enjoy the weekend work,” she said. New workers are reassigned health department employees. The work is paid for by the city’s federal CARES Act grant allocation.

As of October 21st, MHD always sent out its inspectors in pairs and never after 10 p.m. because of staffing shortages and safety concerns. The inspectors start with complaints and then move to spot inspections.

Evers said violators, as they are for other health violations, would be forwarded to the Licenses Committee for license revocation or non-renewal. The council can also suspend a license for a set time period.

Violations of the city’s health order can be reported by calling 414-286-3674 or emailing cehadmin@milwaukee.gov. According to a city statement, complaints will remain anonymous.

MHD is scheduled to release an update on new warning letters and citations issued on Friday. “It’s just a handful,” said Evers of the total citations issued. “Under 10 probably.”

A full list of warning letters and citations can be found in our October 23rd article.

The full Common Council is scheduled to consider the ordinance change at its November 24th meeting.