Local clerks around the state have installed ballot dropboxes.

By Nora Eckert, Wisconsin Center for Investigative Journalism - Oct 30th, 2020 01:48 pm
Get a daily rundown of the top stories on Urban Milwaukee 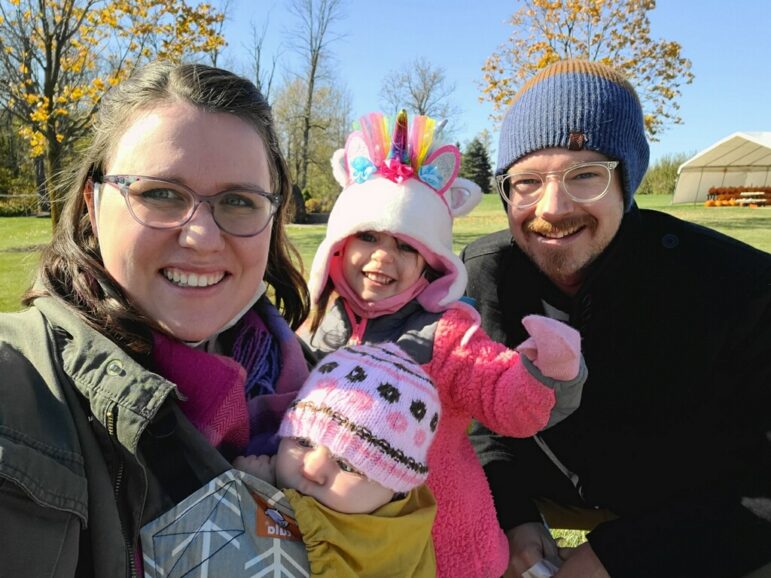 Amanda Vincent and her family dropped off their absentee ballots at the drop box in Allouez, Wis., during a Friday night grocery run in late September. They didn’t want to risk infecting their newborn and 4-year-old daughter with COVID-19 and felt more comfortable depositing their ballot in a drop box instead of sending it via mail. Courtesy of Amanda Vincent

When Amanda Vincent and her family embarked on their routine Friday night grocery store and Chipotle run in late September, they had a special item on their list: a trip to the absentee ballot drop box in Allouez, Wisconsin.

In the past, Vincent usually voted in person and took her daughters along. But she and her husband were worried about exposing their 4-year-old and newborn baby to coronavirus. After considering sending the ballot by mail, they felt even more secure placing it directly in the designated box. Plus, the family outing seemed the best way to mimic the excitement of Election Day.

“In the past, we’ve always gone with our daughters and made a big deal of it to talk about why voting is important and how you can have an impact on your community and your nation,” Vincent said. With that option off the table, the drop box trip felt “a little more climactic,” she said with a laugh.

The drop box in the Green Bay suburb where Vincent deposited her ballot is one of more than 500 in the state, according to the Wisconsin Elections Commission. Before the pandemic, the commission did not track drop box locations, but spokesman Reid Magney said there were very few in 2016.

As of Thursday, 1.9 million ballots had been sent and just over 254,000 had yet to be returned. Voters also can see when their ballot has safely arrived at its destination using the myvote.wi.gov website. To find out whether your municipality has an absentee drop box, search this tool developed by Wisconsin Watch.

Ballots must arrive by Tuesday

The Elections Commission lists several reasons why voters might choose to vote using a drop box, including, “lack of trust in the postal process, fear that their ballot could be tampered with, or concern that their information will be exposed.” This year, another factor is fear of exposure to COVID-19 at a crowded polling place as Wisconsin experiences a record-breaking upsurge in cases and deaths. 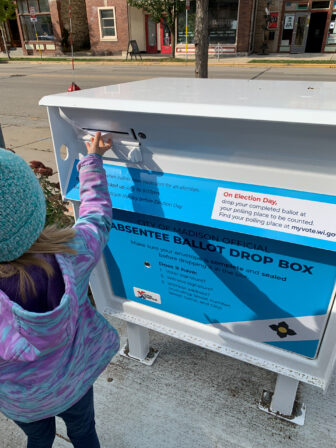 Madison resident River Horn, 6, drops the absentee ballot belonging to her father, Brad Horn, into a ballot drop box on Williamson Street in Madison, Wis., on Oct. 24, 2020. Madison is among hundreds of Wisconsin communities that have installed drop boxes to ensure absentee ballots arrive on time for Tuesday’s election. Coburn Dukehart / Wisconsin Watch

With less than a week before the election, officials are recommending that voters use drop boxes to deposit their absentee ballots, rather than the Postal Service. The U.S. Supreme Court ruled Monday that Wisconsin ballots received after Nov. 3 would not be counted in the general election, unlike in the April 7 election, when ballots could be counted if they were postmarked by Election Day.

Voters can submit ballots at most drop box locations up until Election Day, though some locations have earlier deadlines or time restrictions. Smaller communities with drop boxes right outside of the municipal building may accept ballots later into the day, whereas larger communities with more ballots to count may close drop boxes earlier, Magney said.

If this cutoff has passed and the drop box is sealed, a notice should be posted somewhere on the box with instructions on where to deposit the ballot in person, Magney added.

Some voters fear the possibility of the receptacles being compromised, jeopardizing their votes. On Sunday, a drop box in Boston was set on fire, destroying some ballots inside.

Drop boxes have become a flashpoint in some states, with Republicans in Texas and Pennsylvania suing to limit their use, alleging the potential for fraud. A Texas decision upheld Gov. Greg Abbott’s limit of one drop box per county. A legal challenge by President Donald Trump’s campaign to the use of drop boxes in Pennsylvania was dismissed after a judge found the campaign’s argument about fraud “speculative.”

There are no laws regulating the security of drop boxes in Wisconsin, but the state Elections Commission follows guidance from the U.S. Cybersecurity and Infrastructure Security Agency.

The guidance states that drop boxes should be constantly monitored by a person or a video camera and placed in a well-lit area. The boxes should be locked and only accessible to an election official or designated drop box team.

Jennifer O’Hear, executive director of Common Ground, a nonpartisan education and advocacy group working primarily in Milwaukee, said although she’s heard concerns about drop box security, voters “overwhelmingly” prefer to deposit their ballots in a drop box rather than mail them in or vote in person.

O’Hear is working to maintain voters’ trust in drop boxes by educating them about the safeguards around them.

“We try to reassure people that it is a very safe place, and that somebody is coming and picking up ballots from them every single day. And usually people seem reassured by that,” she said. Milwaukee has 15 drop box locations, including 13 public libraries, according to the Milwaukee Election Commission. 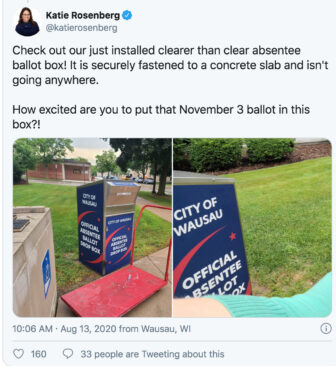 Wausau, Wis. Mayor Katie Rosenberg says one of her first acts in office was adding a shiny, blue behemoth outside of City Hall: a drop box that can hold up to 3,000 absentee ballots. Katie Rosenberg via Twitter

This creates a bit more work for the clerk, and could affect voters if it happens too close to Tuesday’s election.

Milwaukee officials process ballots every day that were incorrectly dropped off by residents of surrounding suburbs, said Claire Woodall-Vogg, executive director of the Milwaukee Election Commission. Workers have immediately mailed ballots to the correct municipality, but to avoid delays in the days before the election, the commission is asking other municipalities to send runners to pick up the ballots, Woodall-Vogg said.

Wausau in central Wisconsin also received ballots from residents of other communities. When the city got coronavirus relief funding from the federal government, one of Mayor Katie Rosenberg’s first actions was adding a shiny, blue behemoth outside of City Hall: a drop box that can hold up to 3,000 absentee ballots.

Some of those ballots came from people who didn’t live in the city, but dropped off their ballots while driving through Wausau.

“I think as nervous as everyone is about the Post Office, they feel like, ‘Oh, it’s a municipality, we’re fine. It’s dropped off,’ ” Rosenberg said.

For those who live in Wausau, that drop box made voting a lot safer and easier. Lila Hobson was too wary of using the Postal Service, which has experienced delays and missing ballots in previous elections. She considered dropping it off at City Hall, as she had in the April election. Even that was worrisome, as she and her husband have conditions that make them especially vulnerable to coronavirus.

“It’s just not worth the exposure risk to my family,” Hobson said. “I just knew that there was a safe alternative. 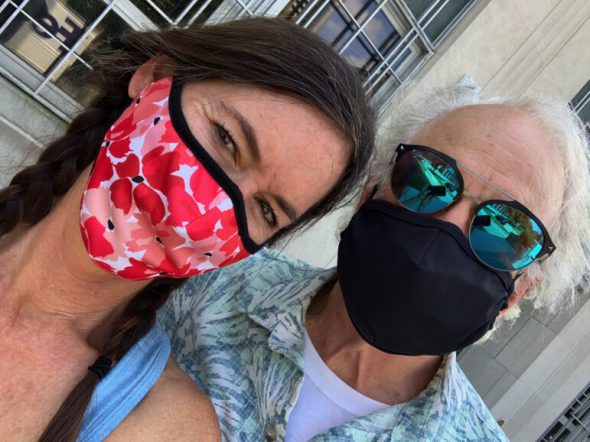 Lila and Bartholomew Hobson voted absentee at Wausau, Wis., City Hall in April’s primary. For the November election, they felt safer using a drive-through absentee ballot drop box. Lila Hobson says a poll worker verified they correctly filled out their ballots, and they watched as the ballots were placed in the drop box. Courtesy of Lila Hobson

Drop boxes can be housed inside buildings, outside under video surveillance or under the supervision of a team of workers, sometimes in a drive-through setting. Hobson participated in drive-through voting on Friday, when she and her husband submitted their ballots under the supervision of masked workers who verified they were filled out correctly and placed them in the drop box as she watched.

Seeing her ballot go straight into the box was a great relief for Hobson.

“We didn’t want to leave room for error,” she said.

The nonprofit Wisconsin Center for Investigative Journalism (wisconsinwatch.org) collaborates with Wisconsin Public Radio, PBS Wisconsin, other news media and the UW-Madison School of Journalism and Mass Communication. All works created, published, posted or disseminated by the Center do not necessarily reflect the views or opinions of UW-Madison or any of its affiliates. Read more of our voting coverage in our Narrow Margin series.