Is Trump a Problem for Down Ballot Republicans?

If he is, Wisconsin's gerrymandered districts could soften the blow.

By Melanie Conklin, Wisconsin Examiner - Oct 29th, 2020 11:38 am
Get a daily rundown of the top stories on Urban Milwaukee

Republican Glenn Grothman was the number one most loyal member of Congress to President Donald Trump, voting with the president’s stances 94% of the time and never criticizing him on a series of high-profile matters.

You would never know it from his campaign ads, which raises the question of whether he’s worried about negative spillover from Trump’s lagging poll numbers in Wisconsin.

“I’m crossing party lines,” Grothman proclaims in an ad titled ‘Independent.’ “I don’t care what the Washington crowd thinks about me. The only special interest I care about is you.” 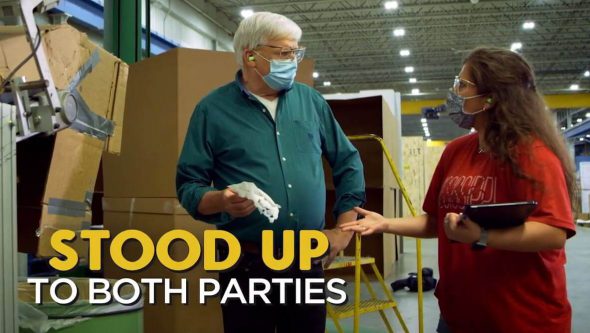 Image of Glenn Grothman from his ad “Independent”

While Grothman appears to be distancing himself from the top of the ticket without naming Trump, Democratic state Senate candidate Brad Pfaff is running an ad seeking to tie his opponent Dan Kapanke to Trump in the La Crosse area seat.

The similarity between the ads is that both give credence to a phenomenon known as the ‘coattail effect.’ This theory presumes a candidate at the top of the ticket — the president on the 2020 ballot — can sweep fellow party members lower on the ballot into office on their coattails. It relies on people voting straight-ticket by party or their attitude to lower-level races being tied to their values in the presidential race.

“The better the vote is for Biden — or substitute Trump — the better it should be for his down-ballot ticketmates,” says Robert Erikson, a professor of political methodology at Columbia University, who has researched down-ballot impact. But he cautions that there is complexity, adding that one additional vote for president does not equate to an extra vote for a legislator.

“A rough guide might be to the extent Biden outperforms Hillary Clinton in an area, as much as 40% of that gain extends to down-ballot races,” says Erikson. However, he cautions, “it could be much less.”

Nate Silver’s analytical prognosticating site Fivethirtyeight delves into how the coattail effect while noting most research in this area focuses on federal races, not state legislatures.

“Looking ahead to November, the presidential race could decide more than just who the next president is,” wrote Geoffrey Skelley an elections analyst at FiveThirtyEight in May. “It could also determine which party controls the Senate or House or even a state’s legislature.”

His analysis found roughly a half-point bump for every 1-point advantage a presidential candidate has in the total vote. That can be a game changer in an already close legislative race. Director of the Center on American Politics at the University of Denver Seth Masket’s analysis in 2016 showed a nationwide “pretty clear relationship — for each additional percent of the vote a presidential candidate receives, his or her party will gain several House seats and about two dozen state legislative seats.”

But the formulas are often defied, and 2020 is anything but a predictable year as wildly inconsistent polling has shown.

“While having an unpopular candidate at the top of the ticket is certainly a challenge, it’s not necessarily a death sentence,” Masket added.

If that carries over in Wisconsin, where polls show former Vice President Joe Biden leading Trump (note: most Wisconsin polls were wrong in 2016) the winning presidential candidate could significantly change the outcome of races for Congress or — much harder to predict — the Wisconsin State Legislature.

Wisconsin is one of the most gerrymandered states in the nation according to multiple studies, so it’s hard to find anyone who thinks that the large GOP advantage baked into the current districts by Republicans, who drew the 2010 redistricting maps, can be overcome.

In fact, Republicans have proclaimed that their goal is to get a “veto-proof majority” big enough to override any piece of legislation that Gov. Tony Evers rejects with his veto pen.

“I think a lot of these [legislative] races that are close will depend a little bit on how well the president does in those areas,” says Republican Party of Wisconsin chair Andrew Hitt of a veto-proof majority. “That was always going to be a significant uphill battle. We already have historic numbers in the Wisconsin Assembly.”

And Democratic state Senate leader Janet Bewley (D-Mason) scoffs at the idea. “No way. The effect of Trump’s presidency … I see it as deadweight. I see it as dragging down their candidates.”

Barry Burden, director of the UW-Madison Elections Research Center says coattails may come into play when voters have less familiarity with down-ballot candidates. “Presidential election winners often have coattails to influence races down the ballot,” says Burden. “In state legislative races in particular, voters have much less information about the candidates and will often vote for a candidate of the same party as their presidential pick.

“But those effects have been dampened in states where the legislative districts have been designed to inhibit voter control over the party balance. This has been the case in Wisconsin.” As an example, Burden cites Sen. Ron Johnson (R-Wis.) who won more votes than Trump.

He labels the stability in current districts “surprising.” Since the last redistricting, the number of Republican seats in the Assembly “has varied only between 59 and 64,” regardless of who dominates the top of the ticket. “Even the 2018 midterms in which Democrats swept all five statewide contests only resulted in one Assembly seat changing parties out of 99 on the ballot.”

“This adds to the likelihood that Republicans will suffer only small losses even if Trump is soundly defeated in Wisconsin,” Burden concludes.

And for Republicans, an article in Governing magazine states even a sweep for Trump might not cause coattail domination in legislative seats. “After just three years in the White House, Donald Trump is seeing a significant erosion of down-ballot seats held by his party.” This is not unusual. “This erosion puts Trump in good company — at least since World War II, presidents typically experience at least some erosion across his party’s numbers of U.S. Senate, U.S. House, gubernatorial, and state legislative seats.”

Closer to the voters

As expected, the chairs of the Democratic and Republican state parties both declared a win for their presidential candidates respectively in a debate hosted by veteran journalist Steve Walters on Wisconsin Eye Tuesday.

“I feel very good about holding off Republican supermajorities,” says Democratic Party of Wisconsin chair Ben Wikler. While he demurs on giving a total number of Democratic victories in the state Legislature, he says, “I do think there will be some surprising potential races that I have an eye on on Election Day.”

Republicans already have a huge legislative advantage nationwide. The National Council of State Legislatures (NCSL) reported after the 2016 election that Republicans control 66 of 98 partisan legislative chambers — an all-time high for the GOP. This includes both the Assembly and Senate in Wisconsin. However a Marquette poll released Wednesday showed a sharp drop in popularity for the state Legislature.

Wikler’s message shows he is not counting on coattails: “I also want to underscore there’s not just a presidential race, although the world will be focused on what happens in Wisconsin, there are state legislative races, there are county offices … These are races where the number of votes is much smaller. And so every vote really, really, really does have an impact.”

Plus Hitt and Wikler agree on this: The quality of the candidates remains extremely important.

“I will say that there are amazing candidates who have tremendous support from their community in every corner of the state running for state legislative seats, and I am cheering for them as they run through the tape,” says Wikler. “The specter of Republicans getting control so they could re-gerrymander the state for another decade — I think everyone treats these races as an absolute must win, and we’re going to be able to fend off that disaster scenario, and hopefully have even better news for Democrats once the votes are tallied.”

Hitt disagrees on that point, citing conservative justices, the economy and “law and order” as reasons he believes Trump will carry Wisconsin.