Both on the health and economic front, harder hit than most states. Why? 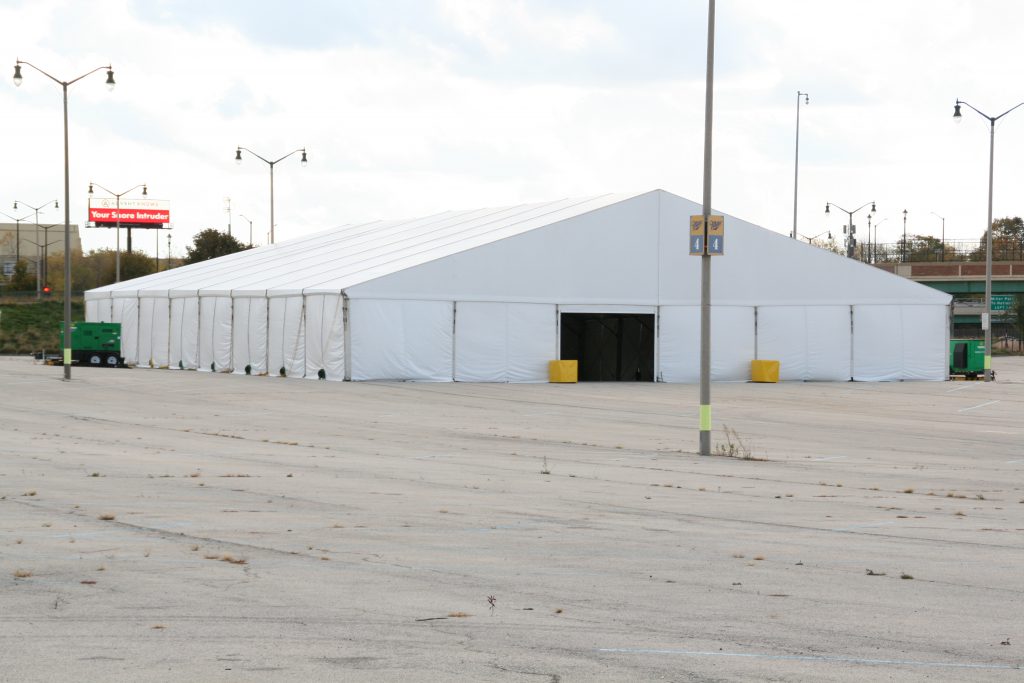 Wisconsin is losing on two fronts in the war against COVID-19. One is the state’s economy. Funding under the CARES Act has mainly run out and Congress and President Donald Trump have yet to agree on a replacement. The other front is public health, where surging cases show we are losing badly.

Let’s start with the data on the economic effects of the pandemic. The graph below plots new applications for unemployment benefits nationally so far this year. At the start of 2020, before the virus hit, weekly claims had been running at slightly over 200,000. After the coronavirus struck, within three weeks the number of new claims jumped to almost 7 million per week. Since early August, new claims have been coming in at a rate of nearly 900,000 per week.

The next graph shows the number of people already receiving unemployment insurance.  At the year’s start, it was running at the rate of 1.7 million. It peaked at 22.6 million in May and has gradually declined, most recently to 11.5 million. Taken together, both graphs show that the effort to mitigate COVID-19 generated a substantial increase in the number of unemployed people. 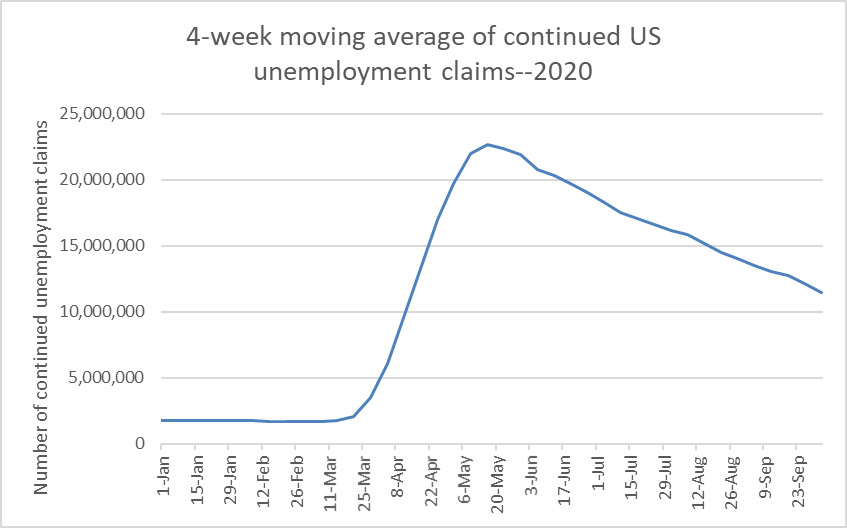 The two graphs above probably underestimate the impact on employment. One provision of the CARES Act, the Paycheck Protection Program, provided loans to small businesses that were forgivable if mostly used to pay employees. This offered an alternative to firing employees when business declined and probably lessened the likely increase in unemployment.

Jobs numbers can be viewed as the mirror image of the figures for unemployment. Although there are exceptions, when jobs go up, unemployment goes down and vice versa. 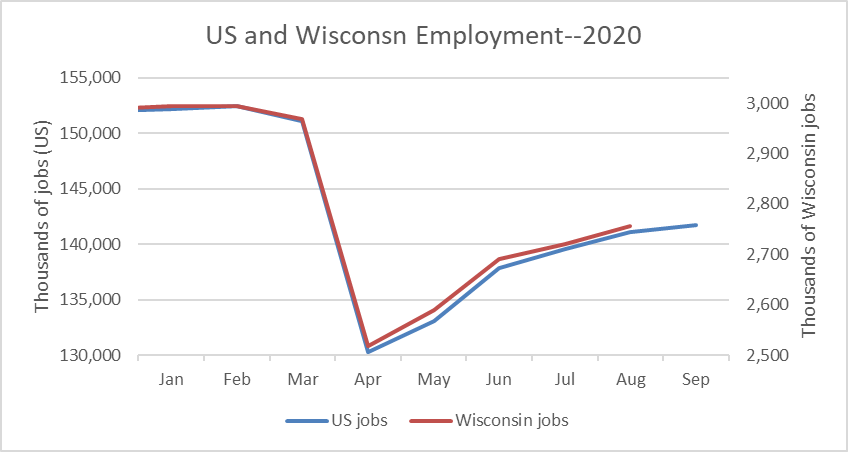 US and Wisconsin employment 2020 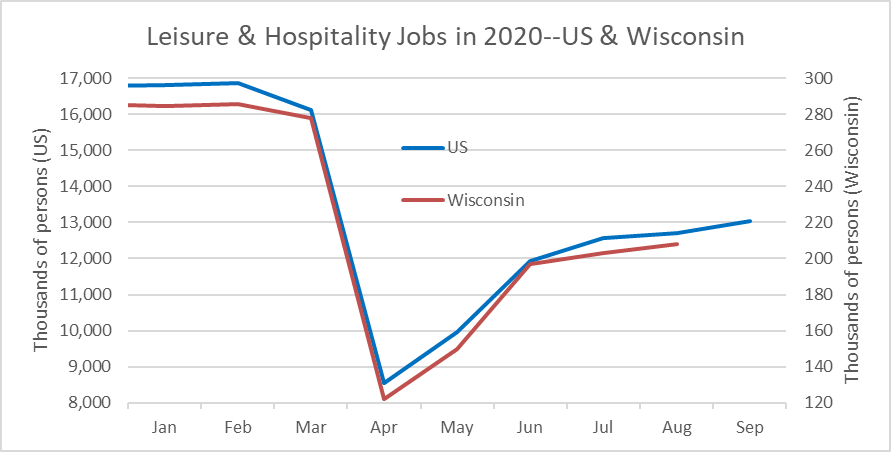 Leisure & hospitality jobs in 2020–US & Wisconsin

Wisconsin Senator Ron Johnson seems to have become a leading voice of Republican senators opposed to extending economic stimulus funds. After listing some of his objections to the CARES Act, Johnson told Wisconsin Public Radio, “I would not be in favor of authorizing even a dime more.” In an interview with Breitbart, he added:

It appears that Johnson’s two major objections to more stimulus spending are the effect on the national debt and his claim that money remains from the CARES Act. Oddly, he did not object to deficit funding used to reduce taxes on businesses and wealthy people in the earlier Tax Cuts act.

The trouble with this argument is it becomes an excuse for doing nothing — nothing to help those individuals who are in danger of losing their jobs and nothing for businesses in danger of going out of business. As a member of the Senate’s Republican majority, Johnson would be better advised to identify and fix problems with the original legislation.

Besides protecting individuals and businesses, a well constructed stimulus can help reduce the pressure to reopen prematurely. The result of acceding to this pressure is that the coronavirus is now running wild in much of America—and especially in Wisconsin, which has suddenly become the fourth heaviest hit state. Wisconsin has become the victim of absolutist ideology.

Take face masks as an example. The most recent Marquette poll finds an overwhelming majority of Wisconsinites support a requirement that masks be worn, at least in public indoor spaces. By allowing people to get together while minimizing the probability of the virus spreading, masks reduce the need to close down the economy to stop the spread of the virus. Yet a very noisy segment of the population regard masks as an affront to personal liberty.

People subscribing to this theory, while a small minority in the overall population, make up about half the Republican base. As a result, Republican legislators seem terrified of offending these voters.

The anti-mask argument reflects an absolutist branch of libertarianism. If I wish to endanger myself by not wearing a mask, the argument goes, that should be my business and government should not stop me. The problem with that argument is that not wearing a mask endangers everyone with whom the person comes in contact.

Get a daily rundown of the top stories on Urban Milwaukee
The media has been hard pressed to find a Republican legislator willing to defend masks. A review of Republican legislators’ websites told a similar story. Rather than the spread of the pandemic, their biggest concern was a lawsuit that would require the release of the number of COVID-19 cases by specified employers.

This libertarianism run amuck is reflected in the (so-far) unsuccessful Wisconsin Institute for Law and Liberty lawsuit against Governor Tony Evers’ mask mandate. It would also appear to be a factor in a recently announced lawsuit by Heartland Institute board member Jeré Fabick and Matthew Fernholz, president of the Milwaukee chapter of the Federalist Society.

To the extent that the Trump administration can be said to have a coherent policy on the pandemic, it fits into this same libertarian strain. In this view, the more infections the better because they move us closer to herd immunity.

It is striking that the virus is able to recruit the human allies it needs to prosper and spread — and that it has been fourth most successful in Wisconsin.