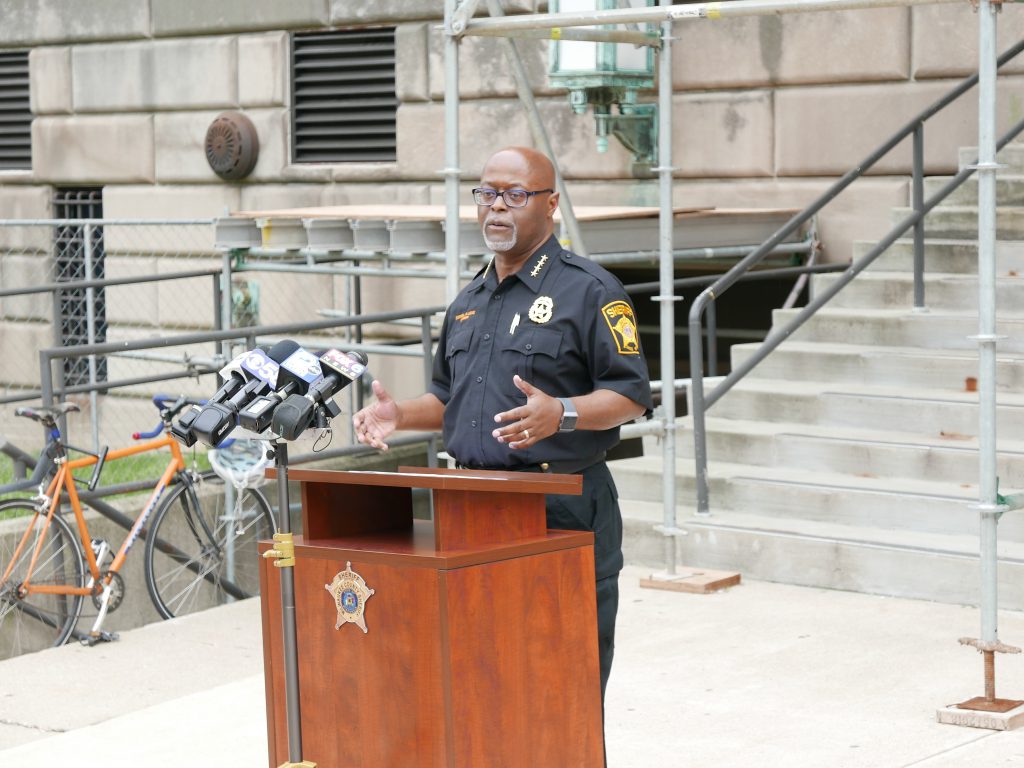 The Milwaukee County Board’s Finance Committee held a hearing on the 2021 budget for the Milwaukee County Sheriff’s Office Tuesday. It was the first meeting where supervisors had a chance to dig into the department’s budget since the protests and calls for defunding police that swept the nation this year.

Sheriff Earnell Lucas and his chief of staff Ted Chisholm went before the committee to advocate for the budget allocation provided to the sheriff’s department in County Executive David Crowley’s proposed budget.

When Lucas addressed the committee he said that the protests that occurred this summer highlighted the need for urgent reform of law enforcement and systemic racism. And he said under his administration the Sheriff’s Office has “rededicated our agency to the pursuit of structural criminal justice reform and of cultural anti-racism.”

Lucas’s office worked with the county executive and the county’s budget office to develop the recommendation for 2021 currently before the county board, which includes “significant reductions,” as he described them. Specifically, the elimination of six vacant deputy positions and a reduction in the overtime funding from the Sheriff’s funding request. Lucas said these cuts were a “contribution made in good faith to support the county’s fiscal health.”

However, like all other county departments, spending on personnel — salary, social security, overtime — does not require additional appropriations when a department exceeds its budget, said Steve Cady, county policy and research director. “So if a department exceeds the amount of money that’s in that, exceeds their expenditure authority,” it can a deficit, he noted.

That has long been an issue for the Sheriff’s Department, with overtime spending and other costs in past years driving the actual budget costs far beyond the approved operating budget. The most recent actual budget, for 2016, shows the Sheriff’s budget at $88.3 million and 771 employees, up from $83.7 million and 658 employees in 2012, as Urban Milwaukee has previously reported.

On paper the 2021 budget of just under $45.9 million is drastically lower than this, but it includes 718 employees, down by only about 7 percent since 2016, when the actual budget was more than $88 million.

Lucas, however, said his deputies are “stretched thin,” his employees are overworked and underpaid, and his administration is working to do more with less. Chisholm noted that in the jail, recruitment and retention of corrections officers continues to be a challenge, though it has improved from 2019 when staffing in the jail was “approaching dangerous levels.”

Despite this, Lucas said his office has built a “safer, healthier and more humane environment” in the jail. And Chisholm noted that inmate-on-inmate assaults are down to 28 compared to 67 last year.

The county has seen an uptick in violent crime in 2020. In the City of Milwaukee there has been a sharp increase in homicides. Chisholm said the sheriff’s office is seeing it, too, with an increase in shots fired incidents on the expressways and in the parks, and the recovery of firearms during arrests and traffic stops.

Lucas and Chisholm asked the board to refrain from cutting the department deeper than the cuts in the county executive’s proposed budget.

However, there have been calls from the community and from elected officials to target the budgets of law enforcement agencies, including the Sheriff’s Office for budget cuts and redirect those funds to other government services.

This call, which is often associated with the slogan Defund the Police, rose to prominence during the nationwide protests that followed the killing of George Floyd by officers with the Minneapolis Police Department.

Using an online tool that allows residents to tinker with the county budget and attempt to balance it, many residents made major cuts to the Sheriff’s Department.

In August, Sup. Ryan Clancy joined a call to cut the sheriff’s office budget by 25%. And he joined the finance committee Tuesday and grilled Lucas and Chisholm for approximately an hour over sheriff’s office operations.

Clancy noted that he has a potential civil claim against the Sheriff’s Office arising from his arrest at a protest in May, but said he would not recuse himself from participating in the meeting because it “would not serve the best interest of the public by forcing an individual to choose between advocating for civil rights and representing their constituents.”

When Clancy began his questioning, he said he wanted to bridge the gap between the public calls for cuts to the sheriff’s office and the county executive’s recommended budget, and to “dispel the persistent myth that the sheriff’s department is untouchable merely because parts of that are mandated by the state.”

Clancy used his time to grill Lucas and Chisholm on a sheriff’s department app and the response to protests this summer.

Regarding the app, Clancy called it a “Karen app” that invites county residents to report on their neighbors. And he questioned how many people actually use it and whether the county should be paying more than $9,000 a year for the app.

Chisholm said the app is not intended for people to report on their neighbors, rather it is for people to report “challenges” that are “often times not associated with individual suspects.” He noted the example of multiple individuals engaged in “prolific” drug dealing or prostitution in a county park. Chisholm said there is limited staffing and resources for the patrol division — the department leans heavily on overtime to patrol interstates and parkways. And that citizens living near parks where crimes are occurring often request high-visibility patrols. And, he said, those patrols are paired with community-led public safety initiatives that put programming in the parks to dissuade further crime.

Lucas responded saying that the sheriff’s office took steps to ensure the safety of lives and property in the county following the decision by Milwaukee County District Attorney John Chisholm not to criminally charge Wauwatosa Police Officer Joseph Mensah in the killing of Alvin Cole. Because the courthouse is a symbol and institution where people in the county seek justice, it would have been “derelict in my duties as sheriff if we did not provide the appropriate resources necessary to ensure the safety of the institution itself.”

Clancy also brought up the cost of the sheriff’s response to protests this summer. Based upon numbers the department provided him, there were 26,474 hours during a three month period starting May 17, that were coded as deputies responding to protests. Nearly 17,000, he said, were overtime. And, responding to Clancy’s questioning, Chisholm said the average pay for deputies is between $23 and $34 an hour. “That puts us well over $1 million for protests and marches,” Clancy said.

“Ours was not an intent for confronting, or clashing with protestors, ours was for preserving the peace, preserving life and property,” Lucas said. The sheriff added that he didn’t know whether the supervisor would rather see a cost paid upfront or on the backend “that some other communities around the country are experiencing right now, including one not too far down the road from Milwaukee County here,” appearing to refer to Kenosha and the property destruction and double-murder that occurred during protests in August.