He was a prominent speaker urging rebellion against Michigan governor. 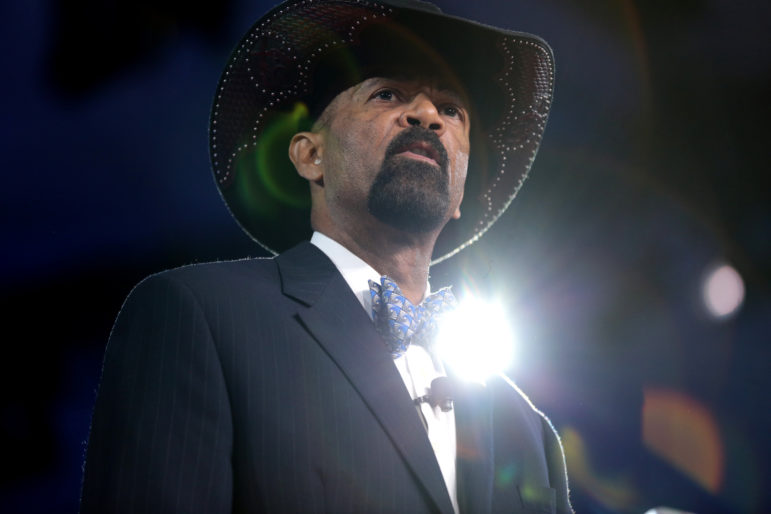 After the bizarre plot by alleged terrorists to kidnap Michigan Gov. Gretchen Whitmer was exposed, she blamed President Donald Trump for encouraging while nationalist groups and urging protestors to “Liberate Michigan.”

She did not note the role of former Milwaukee County Sheriff David Clarke, who gave speeches in Michigan to urge right wing Whitmer haters to resist the governor.

Milwaukee’s cowboy-hatted rabble rouser has been a frequent presence in Michigan, giving a speech in Detroit last March to promote the Build the Wall campaign, whose leaders have since been charges with fraud.

Two months before that, Clarke appeared a fundraiser for conservative Thomas Swafford for Kalamazoo Sheriff, and as speaker at another event, the 2020 Michigan Conservative Minority Summit in Portage, Michigan, as Michigan Live reported.

In mid-April, when protestors gathered in Lansing to urge resistance to pandemic restrictions put in place by Whitmer, Clarke was a featured speaker.

“Hundreds of protesters, some of them armed with assault rifles, gathered at Michigan’s state Capitol… demanding entry onto the state Senate floor to confront lawmakers set to debate an extension of the stay-at-home order in place to curtail the spread of the novel coronavirus,” the Daily Beast reported. “The ‘American Patriot Rally” was aimed at Whitmer, the story noted.

Legislators were so frightened some were wearing bulletproof vests, as Senator Dayna Polehanki tweeted.

“During his speech to the crowd, Clarke, an outspoken Trump supporter, urged the crowd to ‘become defiant’ in the face of Whitmer’s social-distancing order and questioned CDC guidance that people stay six-feet apart. ‘How did they come up with this number of six feet?’ Clarke said. ‘I think they just pulled it out of their rear-ends.’”

On April 30 Clarke was back to the Michigan Capitol to rally protestors against Whitmer again. In a speech documented on YouTube, Clarke declared “You have been lied to. You have been bamboozled into giving up your God-given rights.”

Get a daily rundown of the top stories on Urban Milwaukee
“My fellow Americans from the great state of Michigan,” Clarke was quoted by Media Right News. “My message is real clear to Governor Whitmer: Open Michigan now!”

“Governor Whitmer hear this: If these demands continue to fall on deaf ears and if you continue to ignore the will of the people, they like the founding fathers, will be left with no other recourse than to ignore your pretend legislation,” Clarke warned.

“Michiganders are being polite for now, but not much longer. My advice to the people of Michigan is to become defiant!”

The demonstration certainly looked like a political rally, “with MAGA hats, armed militias, and speakers like Sheriff David A. Clarke Jr. leading the troops,” Medium.com reported.…Just days after Michigan declared a state of emergency, Clarke encouraged his followers to take to the streets, and claimed that “coronavirus is an orchestrated attempt to destroy capitalism.”

Clarke “stoked the crowd’s inchoate rage” and “mocked ‘bulls—‘ ideas such as ‘bending the curve,’ declared the coronavirus death count phony and derided the Trump-appointed surgeon general,” the Washington Post reported. “Clarke demanded that Michigan fully reopen without waiting ‘until testing can be done, not until a vaccine is discovered, but now, dammit!’ He instructed the demonstrators to ‘leave your homes, open your businesses’ in defiance of Whitmer’s restrictions.

“Lock her up!” the crowd chanted.

This was around the time Clarke was kicked off Twitter for his crazy insurrectionist comments. In one tweet Clarke called on people to “Visit bars, restaurants, shopping malls, CHURCHES and demand that your schools re-open… STAY IN THE STREETS. END GOVERNMENT CONTROL OVER OUR LIVES. IF NOT NOW, WHEN?”

Does Clarke really believe in this kind of extremism?  The once moderate Democrat found fame and fortune by becoming a prominent right wing commentator and his views have become ever more inflammatory since he was banned from Fox News and fired by the pro Trump super PAC America in 2019. He’s a man with a history of getting generous speaker fees and never does a gig for nothing, as a source told Urban Milwaukee. But increasingly it’s only the more extremist groups that want his services.

And Clarke delivers what they want to hear. Ladies and gentlemen, it’s Mr. Law and Order, America’s Sheriff who backs an insurrection, so maybe it’s not such a bad idea to kidnap a governor.

As Whitmer put it, ”When our leaders speak, their words matter. They carry weight. When our leaders meet with, encourage or fraternize with domestic terrorists. They legitimize their actions, and they are complicit.”