Huge reduction in no shows in Zoom era. Even a court appearance from Saudi Arabia.

By Gretchen Schuldt, Wisconsin Justice Initiative - Oct 13th, 2020 05:21 pm
Get a daily rundown of the top stories on Urban Milwaukee

A pandemic-inspired move to remote hearings in Milwaukee Municipal Court cases has spurred a significant increase in the number of people actually appearing, according to court officials.

“I think this is absolutely going to stay with us,” Court Administrator Sheldyn Himle told the Common Council’s Finance and Personnel Committee during a budget hearing last week. “We are absolutely hanging on to this.”

The court introduced remote hearings by Zoom when the COVID-19 pandemic forced judges to first shut down their courtrooms and then to strictly limit in-person appearances.

The change has been dramatic, Municipal Court Presiding Judge Derek Mosley said. There has even been a Zoom court appearance from Saudi Arabia, he said.

Before Zoom hearings began, defendants in about 75 of every 100 cases were no-shows and 25 appeared. Since then, it is the opposite, he said. About 25 of every 100 are no-shows, and the rest appear in court.

As far as improving attendance, he said, “This has probably been the greatest thing this court has done since I’ve been on the bench, and I’m going on 19 years.”

The hearings are not streamed for the public and juveniles still must attend their court hearings in person. Mosley said the court cannot guarantee on Zoom the confidentiality the law requires for juvenile hearings. 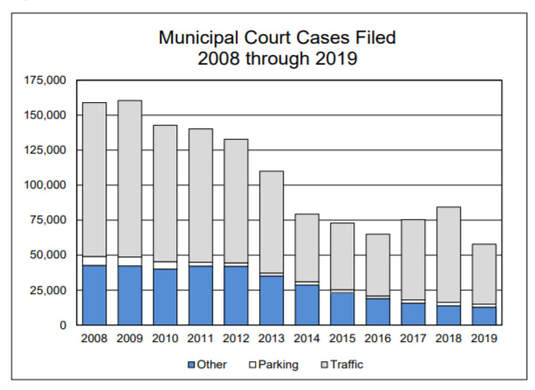 The proposed Municipal Court budget also eliminates the $50,000 the city has given to Milwaukee Public Schools to support its successful driver’s education program. City Budget Manager Dennis Yaccarino said the district could use $50,000 from the money it will realize through its successful referendum. The referendum allows a $57 million increase in the MPS revenue limit for 2020-21.

Yaccarino also said the city would examine the possibility of eliminating one of the three Municipal Court branches in 2023. The number of Municipal Court cases has dropped for several years, and the city will have about 280 fewer police officers to enforce ordinances, said Committee Chairman Ald. Michael Murphy.

The city does not want to eliminate a branch during an incumbent’s term, Yaccarino said. Municipal Court Judge Valarie Hill is up for re-election in 2021, but city officials did not act soon enough under state law to cut that branch in the current budget process, Yaccarino said. The next municipal judge elections are in 2023, when both Mosley and Phillip Chavez are on the ballot.

The total proposed Municipal Court budget is $3 million, up slightly from this year’s $2.9 million budget.