But Republicans have proposed zero plans for dealing with the coronavirus.

By Erik Gunn, Wisconsin Examiner - Oct 9th, 2020 11:48 am
Get a daily rundown of the top stories on Urban Milwaukee 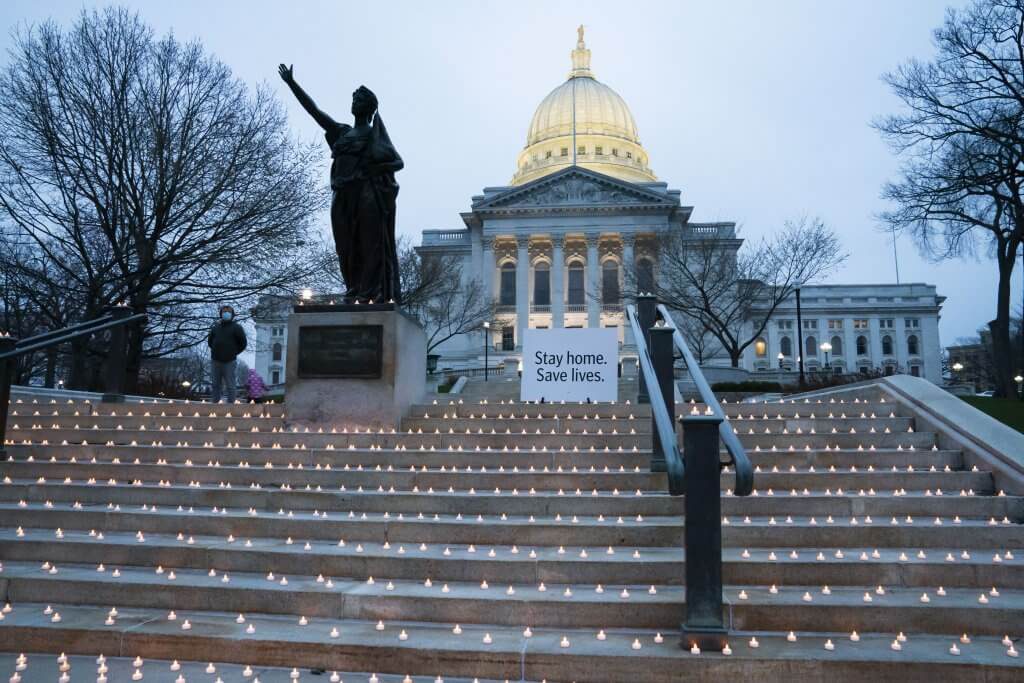 On April 23, 2020, nurses gathered at the state Capitol building in Madison to remember 7,358 Wisconsin residents who had been diagnosed with COVID-19, including 278 who had died. On Thursday, Oct 8, there were 3,132 newly confirmed cases and a total of 141,830 in the state, with 1,424 deaths. Photo by Luther Wu/Wisconsin Examiner.

As Wisconsin set a new record for the COVID-19 pandemic Thursday, the state government polarization over public health remained as entrenched as the coronavirus appears to be.

For the first time since testing began for the virus, the number of newly confirmed cases in a single day reported by the state Department of Health Services (DHS) topped 3,000 on Thursday, with 3,132 new positive tests. That brings the total number of cases to 141,830, including 1,424 deaths.

The dubious milestone passed amid a standoff between Republican leaders in the Legislature and Gov. Tony Evers over the state’s latest health emergency declaration, including an order that took effect Thursday limiting gatherings in restaurants, bars and other public indoor spaces to 25% of their rated capacity.

Upon the order’s publication, a handful of GOP lawmakers took aim, declaring it “unilateral,” “illegal” and “unenforceable.” With that, as with many previous confrontations since well before the pandemic, the Republicans who hold the majority of seats in the Legislature and the Democratic governor staked out their positions and stuck to them.

And as with some of their other disputes, it could end up in court. Or they could run out the clock.

When Evers announced the order on Tuesday, Ryan Nilsestuen, the governor’s chief legal counsel, said it was written with an eye to the state Supreme Court’s May 13 ruling that threw out the state’s Safer at Home order. That ruling, on a 4-3 vote, concluded that an emergency health order must be treated as an emergency rule requiring legislative approval — even though the state law authorizing emergency health orders is silent on that point.

Nilsestuen said that the court’s ruling, though, left intact the authority for DHS “to limit and regulate public gatherings” as part of its response to a health emergency, “and that’s exactly what this order does.”

On Wednesday, Assembly Speaker Robin Vos (R-Rochester) wrote to Andrea Palm, the DHS secretary-designee, declaring that the capacity order was “unenforceable” without going through the rulemaking procedure. Vos attached a Legislative Reference Bureau memo stating that the rulemaking procedure would be required — if a court applied the same test that had been applied to the Safer at Home order.

“Cooperation and collaboration are essential to fight this pandemic,” Vos declared in a statement, accusing Evers of a “go-it-alone, grab bag approach to responding to the coronavirus” that “has been a failure.”

State Sen. Steve Nass (R-Whitewater) stated he would ask the Legislature’s Joint Committee for Review of Administrative Rules (JCRAR) — which he co-chairs — to hold an executive session and vote on a motion requiring the DHS to use the rulemaking procedure. Once the motion is approved, the agency would have 30 days to comply.

“JCRAR has the power to suspend all provisions or parts of any emergency rule issued by a state agency,” a statement from Nass’ office declared Wednesday.

Yet the order itself lasts for just 30 days — two incubation periods for the virus, Evers told reporters Wednesday — in the hopes that it will curtail what has become an exponential spread. It expires Nov. 6.

Late Thursday, a JCRAR executive session appeared on the Capitol schedule for Monday, Oct. 12. The earliest JCRAR deadline, if it even has any force, would fall four days after the order expires.

Evers’ office, meanwhile, is sticking to its right to act — and underscoring that the Republican legislative leaders have not met since April, despite Evers having special sessions called to resolve problems raised by elections in the pandemic and, later, issues of racial justice and police accountability.

When a reporter asked at a media briefing for Evers’ reaction to the Legislature not having met since April — and also told him that Senate Majority Leader Scott Fitzgerald (R-Juneau) said that the governor hadn’t proposed new pandemic-related legislation on which the lawmakers could act — Evers dispatched the question briskly.

“The Legislature can come into session anytime they want to,” he said. “And if they did … we could hear what their plan is.”

Before the Supreme Court ruling ending Safer at Home, Evers added, “the argument that the Republicans made was that they had a plan. Haven’t heard from [them].  Haven’t seen it. Hopefully it will arrive soon.”

Late Wednesday afternoon, following the Vos letter to Palm, the governor’s office reiterated its position that the capacity-limit order was in line with the Safer at Home ruling and didn’t require emergency rulemaking, so it wouldn’t be submitted under that process.

“On their 175th day of inaction, Republicans chose to send a letter,” stated Britt Cudaback, Evers’ deputy communications director. “That says everything Wisconsinites need to know about Republicans’ priorities during this pandemic.”

On Thursday, the leader of the state Senate’s Democratic minority, Sen. Janet Bewley (D-Mason), bolstered the governor’s stance with a follow-up memo by the same Legislative Reference Bureau lawyer, Tamara Dodge, who had authored the memo Vos solicited.

Until someone takes DHS to court, and a court rules that the order is not enforceable, “the order remains in effect,” the new memo states.

Evers’ mask order is already in court, as a judge considers whether to grant an injunction blocking that measure — as well as the health emergency declaration under which both the mask order and the capacity-limit order were issued.

Depending on how it goes, that ruling could be immediately consequential. All sides appear to be watching for that in considering their next moves.

Or it could simply be a way station as the appeals process runs its course. For now, the administration appears to be continuing to go it alone, doing what it can with orders and waiting for the legislative leaders to engage — while urging people to keep wearing masks, staying home, avoiding crowds and washing their hands.