Returned ballots for the November 2020 election. Photo by Jeramey Jannene.

“Voting in Milwaukee is as easy as one, two, three,” said Milwaukee Election Commission executive director Claire Woodall-Vogg in announcing the city’s “Votes Count in the 414” campaign.

But while voting absentee by mail and voting in-person early or on election day all might be easy to do, the effort to support over 200,000 people doing this is a lot harder.

Barrett and Woodall-Vogg spoke from a podium in front of the loading docks at the election commission warehouse at 1901 S. Kinnickinnic Ave. The unassuming building at the south end of Walker’s Point is where all the city’s ballots originate, and ultimately where they all end up.

In the rooms behind them, a couple dozen workers labored in relative silence preparing absentee ballots for mailing, sorting those that have come back and organizing equipment to be used on election day. The work has been on-going since mid-September when the first ballots were mailed.

Kits have also been prepared for each of the city’s 173 polling places and sit ready for distribution five days in advance of the November 3rd election. They’re surrounded by polling equipment, including 400 plexiglass shields and at least one box of “I Voted” stickers.

To date the city has mailed out over 110,000 ballots and gotten back 40,000, of which an estimated 70 percent have been returned via the 15 drop boxes across the city.

Workers empty the drop boxes in pairs daily, ensuring a witness is present when each sealed bag is removed. The ballots are brought back to the warehouse, where the envelope is checked for the appropriate signatures (that of the voter and a witness). If it is deemed deficient, the city contacts the voter and gives them options for remedying the ballot.

Accepted ballots are sorted by ward, without opening the envelope, and stored in a room that is under 24-hour video surveillance and locked when less than two people are present. Under state law absentee ballot processing can’t begin until polls open on election day.

It’s that law which will prevent the city from having unofficial results until the day after the election.

“We are not anticipating we will have results until the wee hours of the morning on November 4th,” said Woodall-Vogg.

Barrett has been a frequent critic of the law. “You would actually think someone would want the system to fail by designing it that way,” he said. He recently gained at ally in allowing earlier processing in Republican US Senator Ron Johnson.

Get a daily rundown of the top stories on Urban Milwaukee
The city, like many other municipalities, uses a central count facility for absentee ballots. It avoids the logistical hurdles of having to collect ballots from a number of points, including USPS sorting facilities, and route them to each of the 173 polling places on election day.

“We believe it is more efficient, effective and secure to use a central count on election day,” said Woodall-Vogg.

The August primary, which Woodall-Vogg said included a surge of ballots being delivered after 5 p.m., wasn’t completed being tallied until 2:30 a.m. the next day.

Once absentee ballots are received the city must sort ballots into 325 wards and process them through high-speed machines. The latter has been upgraded for the November election, with the city now possessing 12 machines, up from four. The machines aren’t perfect, the ballots must be flat and ballots coming out of envelopes are not. “We have to work to get them flat,” said Woodall-Vogg while demonstrating the machine. “As silly and ridiculous as that sounds, it’s a big problem for us.”

She said voters choosing to vote absentee can help speed up the process by returning their ballot ahead of election day.

And however long it takes to count the ballots, Woodall-Vogg will be there. The current plan calls for three shifts with 350 workers working on the 62,000-square-foot, fourth floor of the building at 501 W. Michigan St. The facility is open to the public for observation, as are polling places, but Woodall-Vogg said the commission is working to live stream the operations at central count for those interested.

The central count workers are part of a force of 4,000 Woodall-Vogg and her deputy Jonatan Zuniga hope to recruit. They have over 3,500 already, with 1,000 having prior election experience. The city needs 2,500 workers, but is recruiting additional workers in anticipation of no shows. The job pays approximately $230.

Plenty is happening outside of the election warehouse. The first five of the larger, permanent drop boxes are expected to be shipped from Oregon on Friday. Woodall-Vogg said she anticipates receiving all of them by the end of the month and the city will install all that arrive. She said they are an upgrade because they feature a lockable door to close when polls close.

The current boxes will be acquired by the City Treasurer and then used as secure drop boxes in new locations for city property tax payments.

The city is also bracing for any last-minute election law changes. Woodall-Vogg said she expects more guidance from the Wisconsin Elections Commission, especially related to a federal court decision that would allow ballots to be postmarked by election day and received by November 9th.

Information on voting locations, including early voting and drop boxes, can be found on a new city webpage milwaukee.gov/414votes.

Voters can register to vote, request an absentee ballot, track its mailing status and see if the city has received it back on the state’s My Vote WI website. 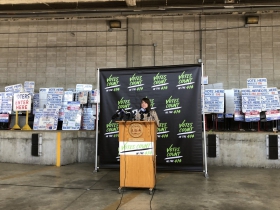 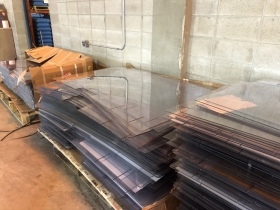 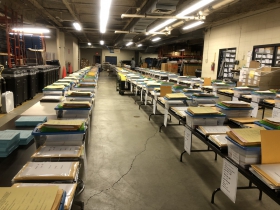 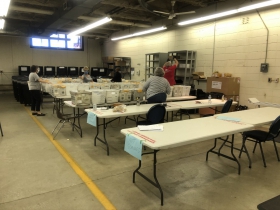 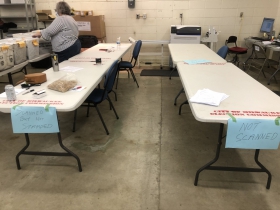 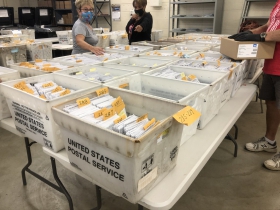