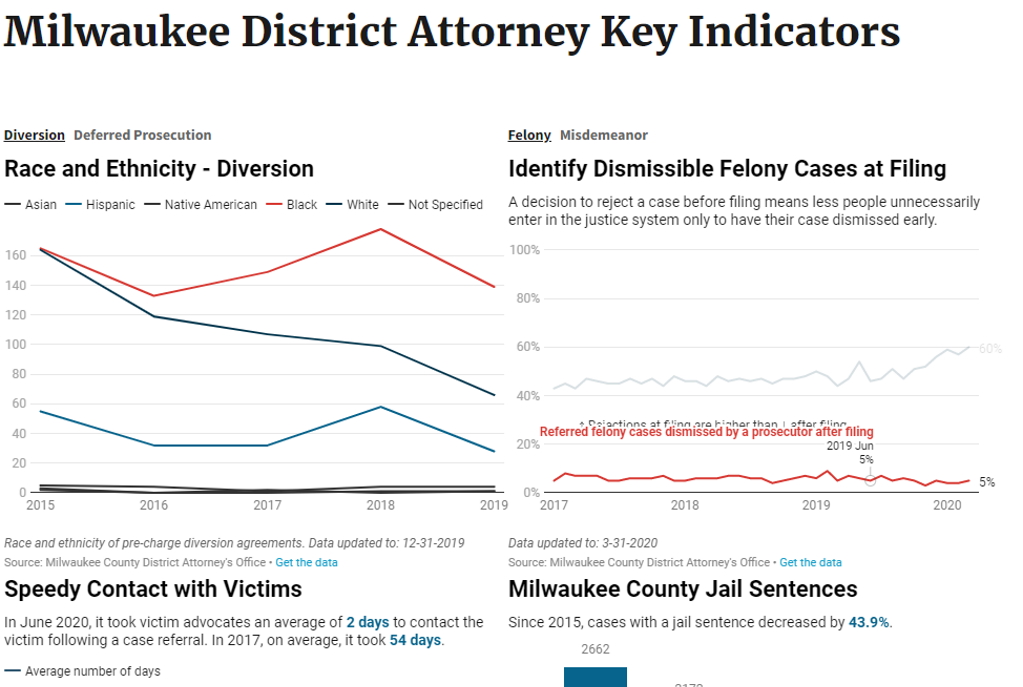 The Milwaukee County District Attorney’s office is rolling out a public data tool that is intended to show how the prosecutor’s office — and justice is being handled — locally.

The new dashboard has organized data into Indicators of Prosecutorial Performance. These indicators were developed by researchers at Florida International University and Loyola University in partnership with local prosecutors, including from the Milwaukee County DA’s office, over the last three years.

These indicators go beyond conviction rates and sentences, and are meant to be a measure of organizational efficiency and fairness before the law, as well as the organization’s alignment with community expectations.

The development of these new indicators was done in partnership with Fair and Just Prosecution, a non-profit that is working with elected prosecutors to develop ways to make the justice system fairer, and less driven by incarceration.

In Milwaukee, District Attorney John Chisholm’s office recently released an initial dashboard showing four indicators of prosecutorial performance. The webpage has publicly accessible data measuring the indicators since 2015. Chisholm said it will continue to add to these indicators, but for now, they show a breakdown of deferred prosecution agreements by race, felony cases dismissed before or after charges have been filed, how quickly the office gets in contact with victims and how many cases annually end with a jail sentence.

The Milwaukee County dashboard was developed by Branden DuPont, a data analyst at the Medical College of Wisconsin and Don Stemen, a professor of criminal justice and criminology at Loyola University of Chicago.

Ultimately, these indicators are an attempt to make prosecutorial conduct more transparent. Chisholm said the data will measure how his office is “performing the critical mission of protecting the community in a way that respects and protects the rights and dignity of victims and offenders alike.”

The data is there for the public and also the prosecutors. Part of the Prosecutorial Performance Indicators project is to create a transparent measure of how local prosecutors are serving their local community, and graded through a system of metrics that they didn’t create.

While Chisholm is joined by a number of other elected prosecutors across the country in this project, Milwaukee County is the only jurisdiction in the state with this dashboard.