Plus: a new Mexican restaurant. And pumpkin spice cream puffs! 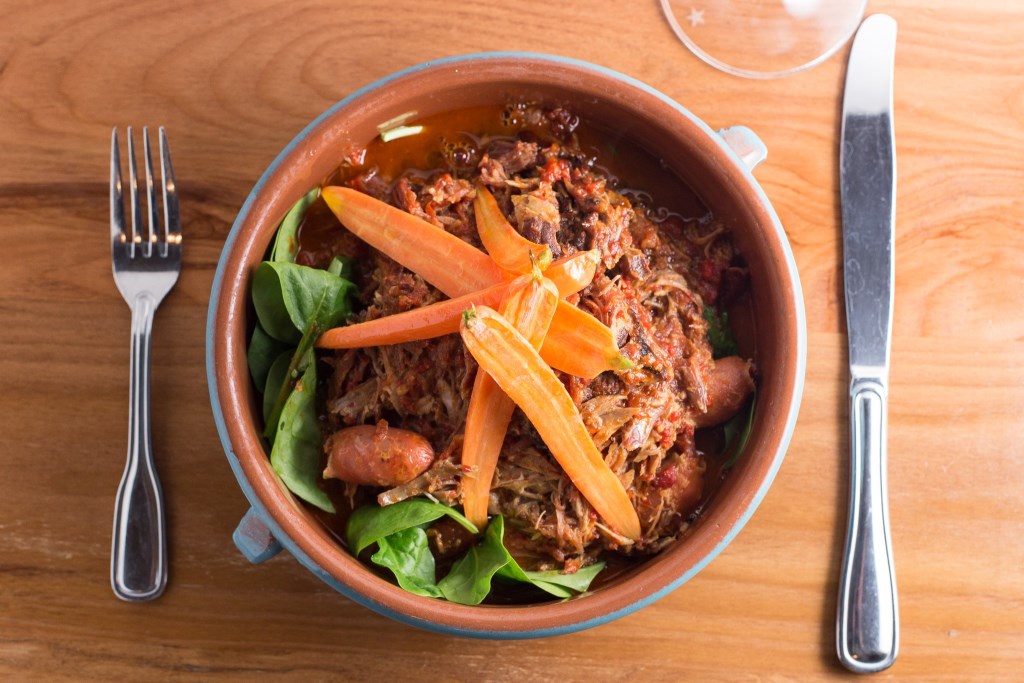 Two popular restaurants in Milwaukee, Amilinda and EsterEv, will be reopening on Friday, September 25.

Amilinda is the cozy Spanish-Portuguese restaurant located in Downtown at 315 E. Wisconsin Ave. Although the restaurant received approval from the City of Milwaukee Health Department to reopen at full capacity after submitting a COVID-19 safety plan, the restaurant is playing it safe and reopening at half capacity. OnMilwaukee’s Lori Fredrich reports:

Dining will available by reservation only, with a limit of six persons per party. Masks will be required for all guests at all times except while eating and drinking (guest should be sure to wear a mask when interacting with staff).

On the menu, guests can expect to see classic Amilinda dishes, including an ever-changing selection of five starters, five entrees and a selection of desserts from pastry chef Sara Ostrowski.

Reservations for in-house dining on Sept. 25 and beyond can be made… at amilinda.com.

Once reopened, Amilinda will be open Wednesday through Saturday from 5 to 9 p.m.

EsterEv, a small-scale tasting-menu restaurant that operates out of American-Chinese restaurant Dandan (360 E. Erie St.) in the Third Ward, has been closed since March, but is returning to serve dinners on Fridays and Saturdays. The Journal Sentinel’s Carol Deptolla reports:

While the weather allows, the dinners will be on the patio at Dandan, 360 E. Erie St.

When dinners must be held inside, they will be in the dining room proper of Dandan, and each party will have its own distanced table.

Previously, EsterEv served diners seated communally at two tables of 12 within a small room at Dandan, a setup that doesn’t allow for social distancing.

Dinner will  be slightly fewer courses than previously at a lower price —  five courses for $65. An optional wine pairing will be $35.

Reservations can be made starting Sept. 16 by phone at (414) 488-8036 or online through exploretock.com. Dinner must be paid with a credit card when the reservation is made, although wine pairings can be added at the restaurant.

The two sisters that own Zisters, a popular Elm Grove brunch restaurant, have plans to open a modern Mexican restaurant called Hermanas in the old Thirsty Duck building at 11320 W. Bluemound Rd. Gabbi and Betsi Zierath are hoping to open their new restaurant sometime in the fall, perhaps as soon as November 1, as Fredrich reports:

Construction has begun on the new project, which will transform the currently sedate mini-bowling venue into a lively restaurant which serves “Mexican food with a twist.”

“We’ve completely gutted the restaurant,” says Zierath, noting that the goal is to create a welcoming restaurant that transitions from a bright, open space during the day to a more intimate, dimly lit atmosphere in the evening.

To achieve that goal, dropped ceilings will be traded for loftier vaulted ceilings and dark wood will be paired with a vibrant, modern color scheme which will incorporate a Zisters signature: a hot pint neon sign which reads “Taco ‘bout a good time.”

Zierath says that the menu fo Hermanas is currently in development. However, she says it will focus on “fresh Mexican food with a twist.”

In turn, the menu will include popular items like tacos, burritos and nachos, all made from scratch with elements like seasonal produce and fresh house-made tortillas.

It’s beginning to feel a lot like fall outside, and many out there have already indulged in a pumpkin spice latte or their favorite pumpkin lager. So, what’s next? How about a Pumpkin Spice Cream Puff from the Wisconsin State Fair, available from October 1 through October 4. According to a press release, the Pumpkin Spice Cream Puff marks the first time in history that cream puffs have been offered outside of the traditional 11-day State Fair time frame. The new fall-themed cream puffs will cost $12 for a three-pack and $22 for a six-pack. There are delivery options available for those who order at least a dozen, otherwise the State Fair is offering curbside pickup that can be accessed by entering through Gate 5 at 640 S. 84th St. Pickup is available from 8 a.m. to 6 p.m. Thursday through Saturday and on Sunday from 9 a.m. to 4 p.m.

Brothers Gyros & Pizza, a new restaurant in Hales Corners, will be opening at 5158-A S. 108th St. in the former Honey Dip Donuts building. The restaurant is expected to open by mid-November. The Journal Sentinel’s Bob Dohr reports:

The restaurant will feature gyros and pizzas, along with salads, shish kebabs and other items.

[Co-owner Steve] Itsines used to own Forum Family Restaurant in Brookfield, opening it in 1992 after moving to Southeastern Wisconsin from New York.

He then ran Casa di Pasta, an Italian restaurant in Franklin that featured a piano player and strolling musicians…

Work to transform the 1,800-square-foot space is ongoing.

The inside of the restaurant will feature an open-style kitchen, seating for 40 to 50 people, and Mediterranean themes.

There will be no outdoor seating to start, but Itsines said they’re hoping to add it next year.

Still pending is village approval for a drive-in pickup window.

Several small business owners were already making a wide range of different foods in the kitchen. Barbecue, fried rice, cupcakes and cauliflower tater tots were prepared on tables and samples were left for visitors to try. The equipment inside is state-of-the-art and includes hot boxes, bread ovens, a walk-in cooler and a walk-in freezer.

Patricia Jones, the kitchen manager, said that the “incubator” is meant to build people’s businesses from the ground up. UpStart works with entrepreneurs who rent the space, helping with networking, licensing and cost of food. Kitchen space is rented out by the hour, depending on applicants’ zip codes. 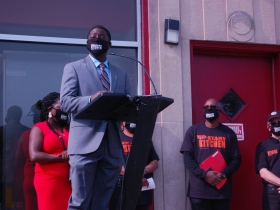 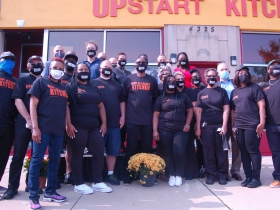 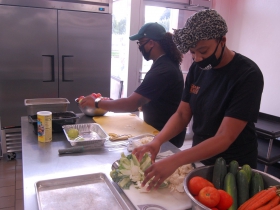