Columnist Bruce Thompson confuses law and policy, we object to how pandemic measures are done.

By Will Flanders, Don Daugherty and Rick Esenberg - Sep 18th, 2020 05:48 pm
Get a daily rundown of the top stories on Urban Milwaukee

In a couple recent pieces, Bruce Thompson contends that “Republicans” are intentionally facilitating the spread of the pandemic. He argues that the “result” of the Wisconsin Supreme Court’s May 13 decision in Legislature v. Palm, which overturned “Safer at Home,” is a 177% increase in coronavirus cases in Wisconsin. Mistakenly viewing our organization, the Wisconsin Institute for Law & Liberty (WILL) as a proxy for the GOP, Thompson then tries to show that we (because we have been involved in Palm and similar cases) are pandemic enablers. To the extent it was unclear to Thompson, WILL opposes the pandemic.

Have conservatives “wanted” the virus to spread or taken actions that have caused its transmission? Putting aside that Palm was filed by the Legislature, and not WILL (our involvement was limited to representing non-party amici although we did develop a constitutional argument that the legislature was not able to make), Thompson confuses law and policy. Our litigation has generally not been about what should be done in response to the pandemic, but how it may be done. In our view, the rule of law is not suspended by a pandemic.

The litigants in Palm argued that, once the Governor’s emergency powers (which are limited to 60 days under state law) have expired, the Governor can no longer act unilaterally to impose restrictions on the rest of us, After an initial emergency period, he must use the legislative or administrative rule-making process. Neither the Republicans or WILL or anyone else in Palm said that no restrictions could be imposed. After the decision, the Governor began – but then abandoned – the rule-making process. Put differently, Wisconsin opened as it did because the Governor insisted on acting unilaterally.

In the same way, WILL’s recent Polk County lawsuit challenges the Governor’s declaration of a second emergency arising from the same material circumstances. In our view, the limitation of the Governor’s emergency powers to sixty days forbids this. It is not about whether the state can have a mask mandate which can, for the most part, be enacted in other ways. But those ways would require greater public and legislative involvement.

But that’s not Thompson’s only mistake. The “evidence” for this is an upturn which began almost thirty days after the decision. It is fundamental that correlation does not prove causation. But, here, there is not even correlation. If the order had caused it, an increase in cases would likely not be delayed by a month.

But let’s dig deeper. If lifting restrictions caused more cases, then one would expect neighboring states who kept such limits in place to have fewer infections. But it turns out that the upward trend in Wisconsin was very similar to neighboring states.

The figure below shows the number of cases per 100,000 in Wisconsin and each neighbor going back to one week after the “Safer at Home” order was overturned by the state Supreme Court.  One needn’t be a data wonk to see that there is an upward trend in all states, with the possible exception of Michigan (which had an upward – and much larger – swing later). 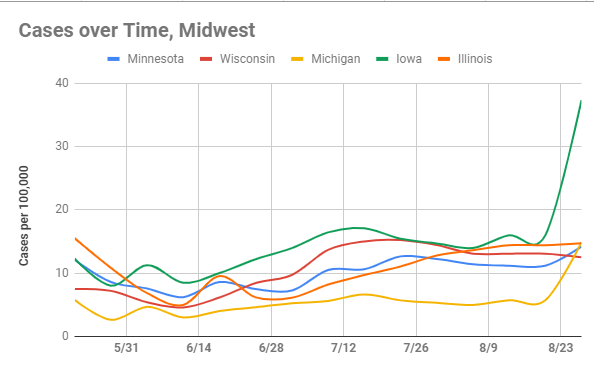 Moving beyond a simple “eye test,” a regression model (i.e., mathematically comparing the increases over time) shows that weekly cases are no different than Illinois and Minnesota, and significantly less than Iowa. But Minnesota didn’t reopen their economy to anywhere near the extent of Wisconsin until June 2nd, and Illinois not until June 25th – more than a month after Wisconsin. Iowa took a path more similar to Wisconsin, with some restrictions being lifted in May and capacity limitations being lifted in June. The only neighbor for which Wisconsin’s case counts look significantly worse in the short run is Michigan, which indeed kept restrictions in place for the longest time. But Michigan’s “advantage” proved to be short-lived.

Thompson also makes the case that Washington County is trending in the wrong direction because of its ostensibly more “conservative” – but undefined – attitude. The virus will strike different areas at different times and Thompson cherry-picked a particular time period that would make his case. The cumulative infection rate in Washington County (about 1.3%) remains about half of that in Milwaukee County (about 2.6%). If we take Thompson’s simplistic view that correlation equals causality, it appears, despite higher rates recently, that conservative governance is leading to better outcomes overall.

Many believe that the rule of law should be suspended for COVID-19. We don’t. But things are not always as black and white as some like Thompson might like to believe. One can be concerned about the pandemic and about abandoning the rule of law for political expediency.