Is COVID-19 Winning in Wisconsin?

The data is alarming. As are the many allies of the virus.

Recent data suggest that Wisconsin is losing its fight to control the spread of COVID-19 in the state. As the chart below shows, the daily per capita rate of new cases (shown in blue) declined for much of August when averaged over seven days. However, in September the rate has shown a sharp upward spike.

Wisconsin’s lower August new case count led Chicago to remove Wisconsin from its list of states whose residents require a two-week quarantine. The Chicago requirement is based on new caseloads over 15 per 100,000 residents (shown with a purple dashed line). With Wisconsin’s case spike, it is likely the quarantine requirement will be reimposed on travelers from Wisconsin.

For months this state has been subject to New York’s similar, but stricter, requirement of an average of 10 cases per 100,000 residents, shown as a yellow dashed line: 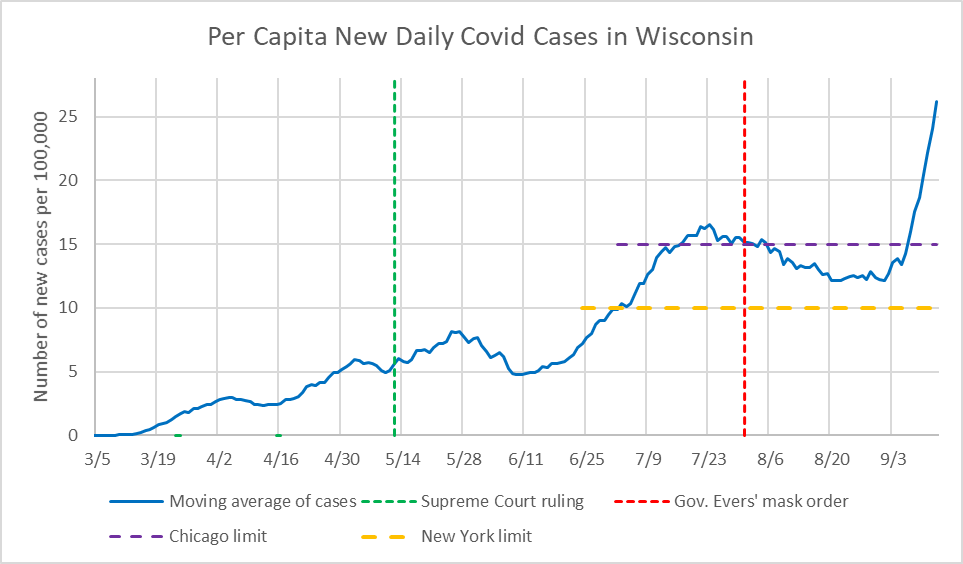 Currently around six or seven Wisconsinites die of COVID-19 every day. Even though the number of cases is substantially higher than that in April and May, deaths are slightly lower. There are several likely causes of this apparent decline in lethality, including:

The next chart shows that there has been a substantial increase in testing in Wisconsin since last spring. However, recently the number of tests has declined, so that increased testing does not explain the most recent spike. 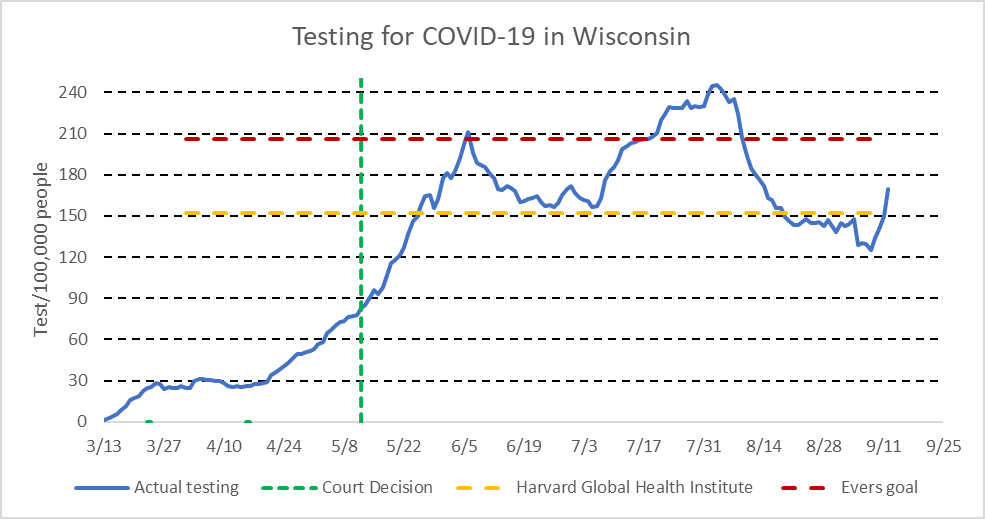 Testing for COVID-19 in Wisconsin

The next chart shows that the percentage of Wisconsin tests with positive results for COVID-19 has risen substantially recently, currently averaging around 14 percent. This is considered very high and a sign there are uncounted people who have the disease and are able to spread it.

How many other people are infected by the average person with COVID-19? If the answer is more than one, then the virus is spreading. If it is less than one, the virus will become less common and, theoretically at least, eventually disappear. This number is called Rt. The chart below one model’s estimate of Wisconsin’s Rt value over time. Recently, the estimated Rt has crept up so that it is the second largest among the states, after West Virginia’s. This outcome implies that Wisconsin is on track for a serious increase in COVID-19 cases if present trends continue. 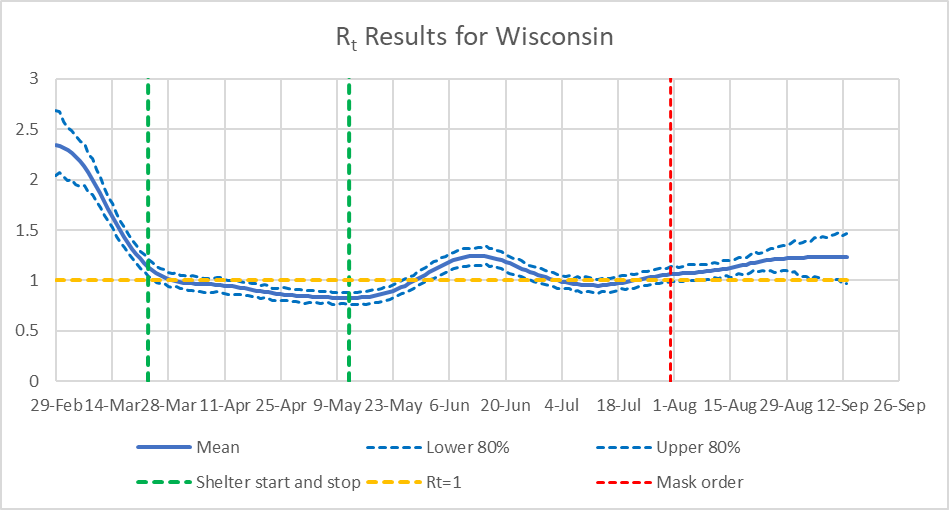 Since late July, Milwaukee County’s daily new cases have been declining, from a high of thirty-some cases per 100,000 residents to a low of ten before jumping to fifteen in the past week. Thus, for the first time, Milwaukee is pulling down the state average, rather than pushing it up. 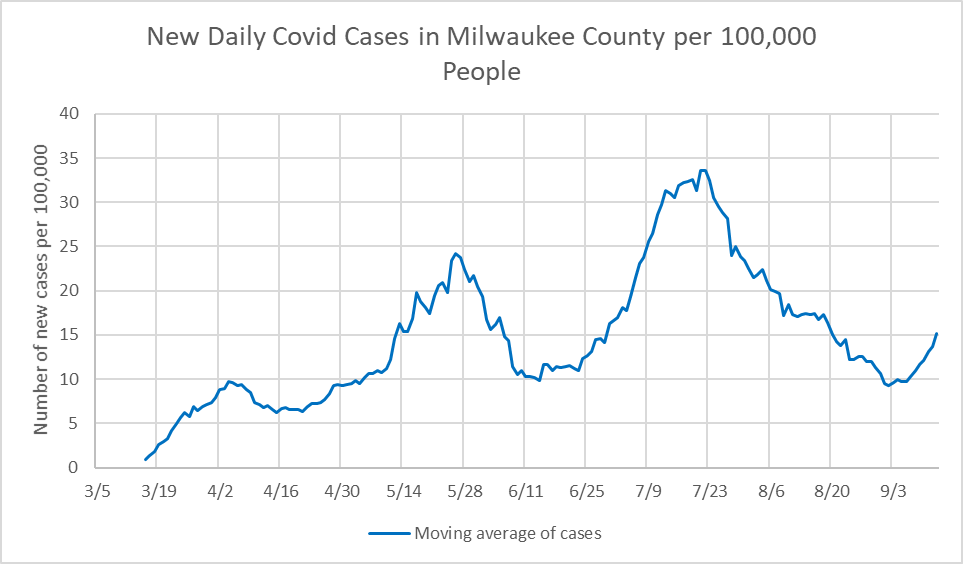 The point is not that COVID-19 is being superbly managed in Milwaukee County. Rather, the virus is aggressively spreading in much of the rest of Wisconsin. The graph below shows the counties with the largest per capita new cases per day. Geographically, they are widely scattered around the state, with something of a hot spot in the Fox Valley. 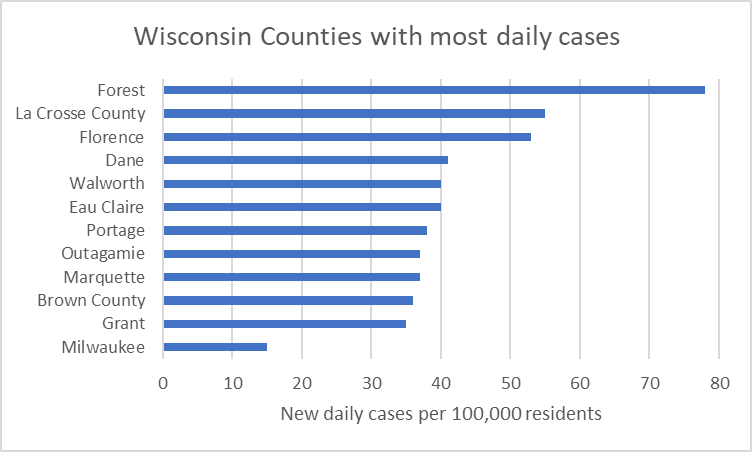 Wisconsin counties with most daily cases

The New York Times recently published a national list of the cities with the fastest rising new case load. Three Wisconsin towns were among the top ten: Madison (in 5th place), Platteville (6th), and Whitewater (9th). Their counties are also listed in the graph above.

A common thread to all three cities is that they host campuses of the University of Wisconsin, whose student population is large compared to that of the rest of the city. This suggests that these campuses reopened without adequate planning.

Here are two reasons that the coronavirus is spreading in Wisconsin.

First is the belief in much of rural and small-town America that their low population density offers a kind of wall against the spread of COVID-19. They can point to the fact that the virus initially targeted large population centers, mostly in northeast states. Unlike residents of those areas, they seldom use public transportation, live in detached housing, and are less likely to deal with strangers.

In anticipation of Donald Trump’s rally in Tulsa, the press ran interviews with Oklahomans who expressed confidence that their low population assured that they would not suffer the fate of New York and other populous states. As it turns out, the Trump rally was a “super spreader” event. Most recently, the Washington Post put Oklahoma just ahead of Wisconsin in the number of new cases per capita.

Similarly, prior to Trump’s ceremony at Mt. Rushmore and the Sturgis motorcycle rally, South Dakota residents attributed their avoidance of a major outbreak to their low population density. Recently South Dakota has been at the top of the list of states based on their per capita rate of new cases, although North Dakota has moved ahead.

Similarly, there seems to be a belief in many of Wisconsin’s rural counties that measures to control the virus are done for the sake of Milwaukee and Madison, and for which they are expected to pay the price. In its challenge to Governor Tony Evers’ mask order, the Wisconsin Institute for Law and Liberty (WILL) exploits this perception, pointing out that its clients are residents of Polk County, a small county in the northwest of Wisconsin. Thus, it argues, they have no need for masks.

Currently Polk is seeing new daily cases at the rate of 8.8 per 100,000 residents. This is relatively low for Wisconsin but leaves Polk vulnerable to an explosion of cases if the right super spreader event comes along. The Wisconsin Department of Health rates Polk’s activity level as “high.”

By deciding that COVID-19 “cannot happen here,” residents of Wisconsin’s smaller counties help make their counties friendlier to the virus. In addition to complacency, COVID-19 benefits from the number of allies it has gained in Wisconsin. Here is a partial list: