Money must be prepaid, records will take 12 weeks to process, lawyer for families of three people killed by police officer is told.

By Isiah Holmes, Wisconsin Examiner - Sep 15th, 2020 11:34 am
Get a daily rundown of the top stories on Urban Milwaukee 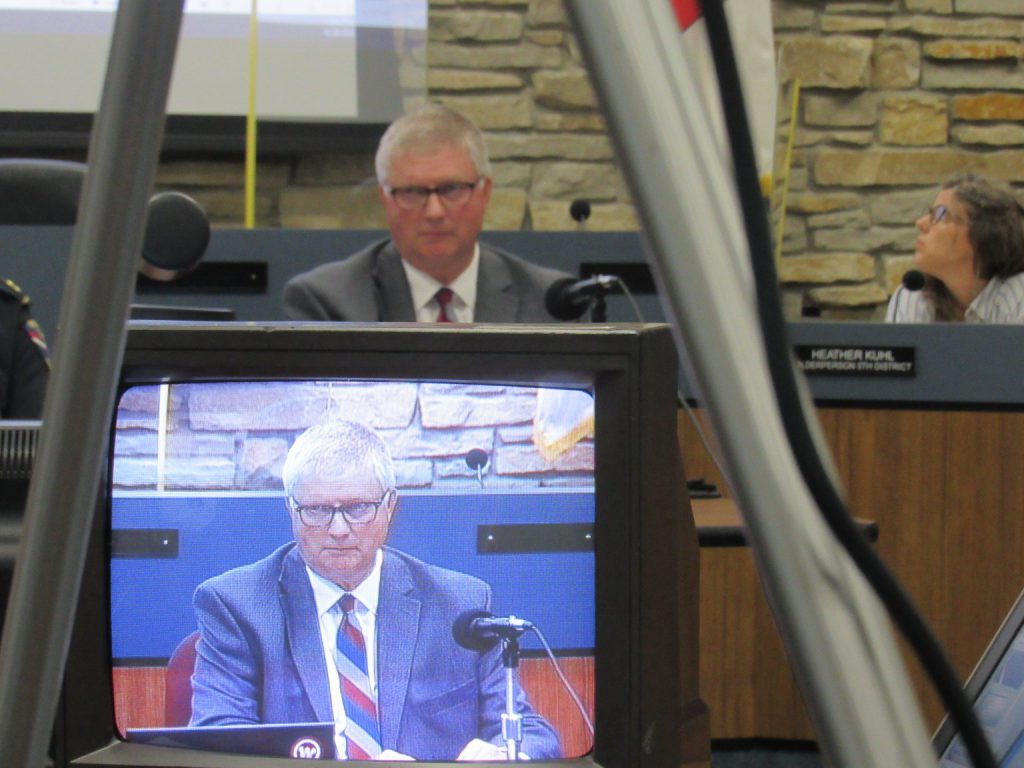 “I definitely think that they are doing things that are very intentional to impede our investigation,” Kimberly Motley, a lawyer representing the families of three people killed by a single Wauwatosa police officer, told Wisconsin Examiner. It’s been months since Motley, and her colleague Deja Vishny first filed a slew of open records requests to the Wauwatosa Police Department (WPD), seeking information they say is crucial to their efforts to examine what goes on behind the department’s walls.

Motley’s firm made several open records requests of the Wauwatosa PD, she said. “And we receive a bill back from the Wauwatosa Police Department that the five records would cost, at a minimum, $5,400.”

In addition, the department informed Motley that it would take at least 12 weeks to produce the records, and that the bill would have to be prepaid.

Among the items requested by Motley Legal were the complete and unredacted personnel files of both Officer Joseph Mensah, and Chief Barry Weber. Mensah has been the focus of recent protests, after he was  involved in three fatal shootings over a five year period, and the only WPD officer to kill anyone in the last seven years. Motley Legal also requested Weber’s resume, which WPD stated it didn’t have a record of. Records were also requested pertaining to investigations conducted in the late 1980s into overtly racist Martin Luther King Day parties held by WPD officers, including sergeants and a lieutenant.

Dressed in Black face and stereotypical clothing, sporting name tags with Black sounding names and passing out fliers depicting Black people as “a substitute animal” for hunting, they held the parties for several years. At the time, the Police and Fire Commission (PFC) decided that the 13 officers wouldn’t be charged for their involvement in the parties, which it ruled were constitutionally protected activities. However, the PFC continued to explore charges for on-duty misconduct against six of the personnel, including two sergeants, a lieutenant, and a detective. (WPD has just over 90 sworn officers on its force.)

“This is when Chief Weber became the police chief of Wauwatosa,” explained Motley. Weber arrived as the investigation was being carried out, and later promoted one of the sergeants, John Bozicevich, to lieutenant. He noted to local newspapers that he felt there were “no lingering effects” from Bozicevich’s attending and even hosting the racist parties. Although it’s difficult to view the decades-old archived Milwaukee Journal Sentinel articles online, these articles can be seen at 12 minutes 36 seconds into a documentary made about Tosa PD in 2015.

Motley requested the personnel files for all the officers involved in the parties, as well as documents indicating the disciplinary outcome of those investigations. “Their response essentially was, ‘Well we don’t really have documents on that,’” Motley told Wisconsin Examiner. “If they did an investigation, then they would have that information.” 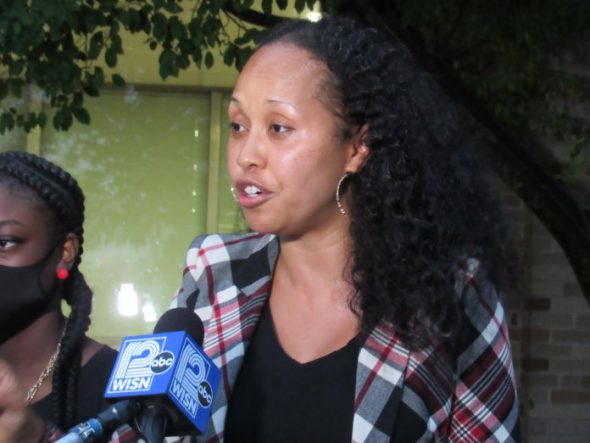 Although unrelated to her representation of the families of those killed by Mensah, Motley feels information about WPD’s record is crucial for Wauwatosa residents to see. “This community is entitled to know who those officers are, and are they still with the Wauwatosa Police Department.” It’s also of note that the president of Wauwatosa’s PFC, Dominic Leone, having been a WPD officer from 1975-2010, was employed by the department at the time of the parties, and left at the rank of lieutenant.

Along with those records, Motley also requested documents that would lay out WPD’s policies and procedures for use of force, holstering service weapons, how to approach a person in a motor vehicle, and how an officer should engage video and recording devices. Other requested items included WPD policies regarding psychological counseling, complaints made by citizens against officers for use of force, and emails and messages sent between Weber, Mayor Dennis McBride, and other city officials regarding the potential use of body cameras by Tosa officers.

Though it may seem like Motley is casting a wide net, the materials she’s seeking would help build evidence related to Mensah’s second shooting. In the summer of 2016, 25-year-old Jay Anderson Jr. pulled over in a local park to rest. He had been celebrating his birthday a week early, and his family says he was attempting to rest rather than drive home intoxicated.

Mensah noticed the car shortly before 3 A.M., and stated  that when he pulled up Anderson appeared to be asleep. After shining lights from his squad onto Anderson’s vehicle and checking through the windows for other occupants, Mensah woke the sleeping man. According to Mensah, the two conversed briefly when he noticed Anderson had a gun on the passenger seat. The officer states that he ordered Anderson not to reach for it, and fired his weapon when he did.

Anderson was struck in the head several times, and once in the shoulder. The only video captured that night is less than 30 seconds of mute dash footage, as WPD officers not assigned to motorcycle duties are not assigned body cameras. Officers who arrived minutes later after Anderson had already been shot then removed the gun from the car without taking pictures of it for evidence. Though many questions lingered around what exactly happened that night, Mensah was cleared of wrongdoing months later.

Motley is concerned about a number of issues in that case, especially whether policies and procedures were followed, and whether Mensah received any psychological aid or evaluation after the Anderson shooting. Less than a year earlier, Mensah was involved in the fatal shooting of 28-year-old Antonio Gonzalez, and four years after Anderson the officer killed 17-year-old Alvin Cole, whose case is still being investigated. However, the lawyer is unable to even begin some of her inquiries without WPD providing the necessary documents. Motley and Vishny highlighted this in a PFC meeting that resulted in Mensah’s suspension.

“I do think that they’re completely slow-rolling this on purpose and intentionally,” said Motley, “but we’re going to keep pushing forward.” When an officer’s personnel file is requested, the department must notify that officer of the request. The officer then has a 30-day period wherein they can decide whether they want to challenge the request. Although Motley requested Mensah’s file on June 15, it wasn’t until July 20 that WPD notified Mensah of the request, which extended the timeline.

As Motley wrestled with WPD for the records, Wisconsin Examiner had its own open records issues with WPD. Our requests centered around emails in Chief Weber’s inbox which were related to one of the first large police responses WPD mustered against protesters in the city.

On July 7, protesters peacefully shut down a Cheesecake Factory restaurant near the site where Cole was killed in February. It was the second time the marchers, backed by Cole’s family, had organized a shutdown of the restaurant. WPD officers, alongside numerous other departments, responded and forced the protesters out of the restaurant, and briefly arrested some of them. It was unclear whether other city officials were involved in the response, or whether WPD acted on its own accord.

Then-Sergeant Joseph Roy was handling all records requests for the department. Roy quoted high pre-costs for the Wisconsin Examiner’s requests totaling nearly $400. The department explained that the costs were so high because WPD wouldn’t allow a lower paid officer, other than Chief Weber, to conduct the search for the appropriate emails in his own inbox. Costs for open records are partly based on the hourly pay rate of the person who searches for the records.

Roy estimated the search for the Examiner’s requested emails would take six hours, at a rate of $66.07 per hour which he noted, “is the lowest possible hourly rate of an employee able to perform this task.” Doing some simple math, that means said employee would be making over $137,000 a year, assuming a 40 hour work week. That narrowed it down to Chief Weber himself.

“Only the Chief of Police can ‘search [or] examine’ those emails to determine which are personal, excluded by your requests, or responsive to your request,” Roy emailed back after Wisconsin Examiner asked if a lower paid employee might be able to fulfill the request. “Therefore, the Chief of Police is the lowest paid employee who can respond to your request. It is not possible to know the amount of time it will take for the Chief to review those emails until he does the work.”

The records are also subject to redaction. Motley paid $1,320 of the $5,400 WPD quoted her, which was supposed to cover the emails in Weber’s inbox she requested to be processed on August 7. At some point before August 13, when Motley sent a new set of requests, Sergeant Roy was promoted to lieutenant. Motley has not received a single email she requested, despite making the payment more than a month ago.

These sorts of tactics aren’t unheard-of says open records attorney Tom Kamenick, founder and president of the Wisconsin Transparency Project. “High fees are probably the biggest obstacle facing record requesters in Wisconsin,” he told Wisconsin Examiner. “Government custodians know that the higher the fee they quote, the more likely somebody gives up on their request. Time and time again I see government officials trying to charge fees they aren’t allowed to charge under the law, knowing they rarely are challenged. The Wisconsin Supreme Court has ruled that custodians can’t charge for the time they spend redacting records or “reviewing them once they are located.”

Several years ago, a request for the emails of former Milwaukee County Sheriff David Clarke Jr. filed after the controversial sheriff had already left Milwaukee County was handled by a lower ranking deputy. There was no pre-pay requirement. Hundreds of pages of emails were provided, with a final cost of $166 to be paid at a later date. That included locating, redacting, printing, and mailing the emails.

Motley says that WPD hurts its own image when it uses delaying tactics to avoid open records. “Their credibility is not only crumbling with keeping Officer Mensah on the police force, but their credibility continues to crumble when they do [things] like that and give us all these responses of a $5,400 bill.

“They’re also opening themselves up to litigation,” she adds. “And I like court.”

One thought on “Tosa Police Charge $5,400 for Public Records”