Country notices they spent one minute gaveling in and out of police reform special session.

By Melanie Conklin, Wisconsin Examiner - Sep 3rd, 2020 01:51 pm
Get a daily rundown of the top stories on Urban Milwaukee 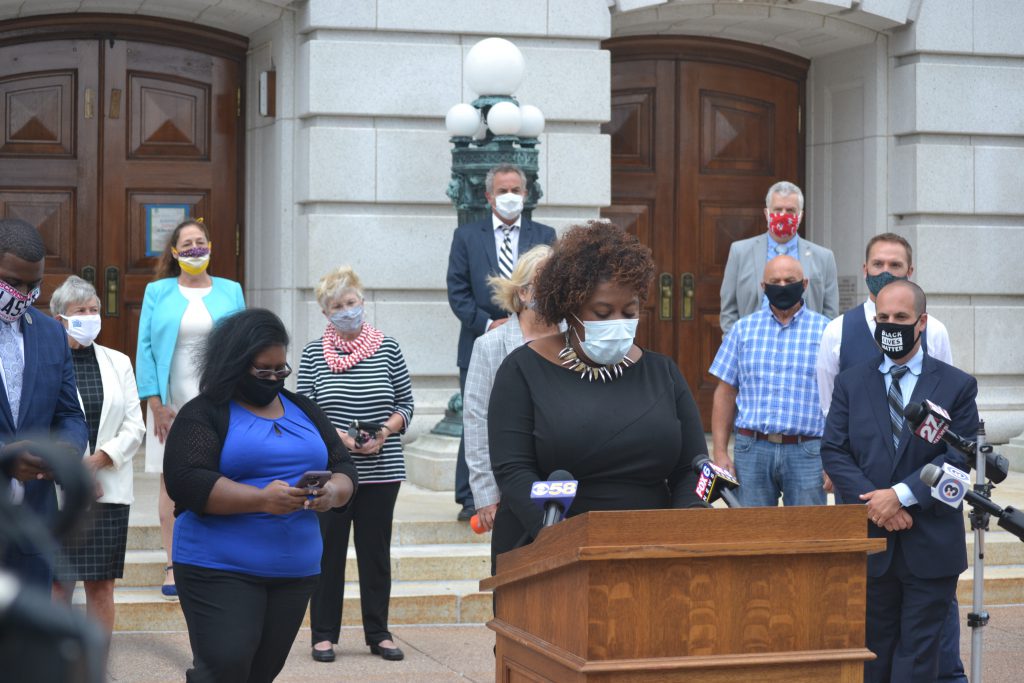 Sen. LaTonya Johnson speaks at the Democrats news conference when the Wisconsin Legislature was called into special session to address racial justice and police reform — and did not act. Photo by Erik Gunn/Wisconsin Examiner.

The Legislature blowing off Gov. Tony Evers’ calls to act on pressing issues in a special legislative session is no longer news in Wisconsin, it has happened so often (on education funding, farming, pandemic voting, gun-safety measures).

But unlike those past sessions, Monday’s punt on taking up bills tied to police reform and racial justice drew heightened outside attention —  and not only from the Milwaukee Bucks.

It made national headlines inside and outside the political realm. The unflattering NBC News headline was “Wisconsin special session on police reform lasts less than a minute. GOP not interested.” Several dozen athletes from different teams and sports sent a detailed, lengthy protest letter to Majority Leader Scott Fitzgerald, Speaker Robin Vos and Evers, shared in full by Yahoo Sports. And there was a resounding rebuke in Rolling Stone.

All this attention outside of political circles was generated by the tragic event captured on video, when a  white Kenosha police officer shot Black resident Jacob Blake in the back seven times in front of his children. Protests have been going on continuously across the country since the Aug. 23 incident. That means that this time there were witnesses nationwide to the fact that the Legislature never showed up. (A few people came in long enough to gavel open a skeletal session and then left less than a minute later. Democratic legislators, led by the Legislative Black Caucus members held a news conference in protest outside the Capitol.)

ESPN eschewed sound bites to give the players and coach a lot of (virtual) ink to express their disappointment with the Wisconsin Legislature. Coach Mike Budenholzer joined the players in saying he felt let down by the Legislature’s inaction: “Speaking personally, I think it’s really disappointing … We don’t claim to know everything about politics, but it just seems like to get in a room, to have a conversation, to debate it, to talk about it … there’s lots of things going on in our state, between COVID-19, social unrest, to come to work, to have conversation, to have debate, to figure out what is going on. Governance, leadership is needed at this time. So, for the leadership to gavel in and gavel out after 30 seconds is just disappointing. At the end of the day, it feels like there’s work to be done, and they’re not doing it.”

“We have joined together with Wisconsin activists to demand state lawmakers ensure justice is served for the officers that shot Jacob Blake, and that leaders step up to keep our neighborhoods safe,” they wrote in a long letter, “We are calling on leaders at the local and state level to significantly pass police reform legislation and fund community-led approaches to address violence statewide to ensure that we are protecting marginalized communities and build healthier neighborhoods.”

#WNBA athletes & others join @athletes4impact in submitting a letter to Wisconsin politicians that calls for 1) a ban on excessive use of force policies, 2) funds a violence intervention/prevention program, & 3) a plan to end violence that takes a public health approach. pic.twitter.com/eLSiH4aL5F

The letter promoted actions that need to be taken (many of which are included in the Evers/Black Caucus bills) as well as highlighting gun violence, Milwaukee homicides and the disproportionate impact of COVID-19 on communities of color. The bills from Evers and the Legislative Black Caucus include a ban on no-knock warrants, mandatory training on de-escalation techniques, preventing problematic officers from transferring jurisdiction and statewide standards on use of force.

The women and men from a variety of sports and teams who signed the letter were united under the banner of the group Athletes for Impact, which describes its mission as “a vehicle for athlete activism & a vital resource for athletes across all sports to be part of an intersectional movement for justice.”

The letter was printed in full by Yahoo Sports, which concluded its article with this warning: ”Further inaction from the Wisconsin State Legislature could prompt more strikes or protests from the Bucks or other professional sports teams across Wisconsin.”

Among the most scathing national assessments of Wisconsin legislators’ inaction came  from Rolling Stone. In a column titled “Wisconsin’s Governor Called a Special Session on Police Reform. Republicans Stopped It After 30 Seconds,” with the subhead, “It’s the latest case of malfeasance from lawmakers who’ve rigged the system to make themselves immune from the will of the voters,” author David Daley did include a sports reference: “By NBA standards, neither chamber stayed in session even the length of the 24-second shot clock.”

Daley, author of the books “Ratf**ked: Why Your Vote Doesn’t Count” and “Unrigged: How Americans Are Battling Back to Save Democracy,” wrote that it all comes down to the will of the people being thwarted by gerrymandering.

“Wisconsin’s Republican-controlled legislature cannot be budged. Not by the governor. Not by the people. Not by vigilantes in the streets. Not by the Milwaukee Bucks. Wisconsin’s brutally gerrymandered state legislative maps — by almost every standard, the nation’s most biased — guarantee that they can’t even be budged at the ballot box. And so they remain an immovable and unaccountable force.”

Even with the session left open, in order for the bills by the Legislative Black Caucus and Evers to be considered, they must first be introduced by the bodies’ organizational committees.

At the news conference held by Senate and Assembly Democrats on Monday as Republicans gaveled in without acting, Sen. LaTonya Johnson (D-Milwaukee) predicted that if nothing is done, the Kenosha police shooting will be repeated, “It’s not a matter of if, but when. … We need the Republicans to do their damn jobs.”