By Melanie Conklin, Wisconsin Examiner - Sep 2nd, 2020 10:39 am
Get a daily rundown of the top stories on Urban Milwaukee 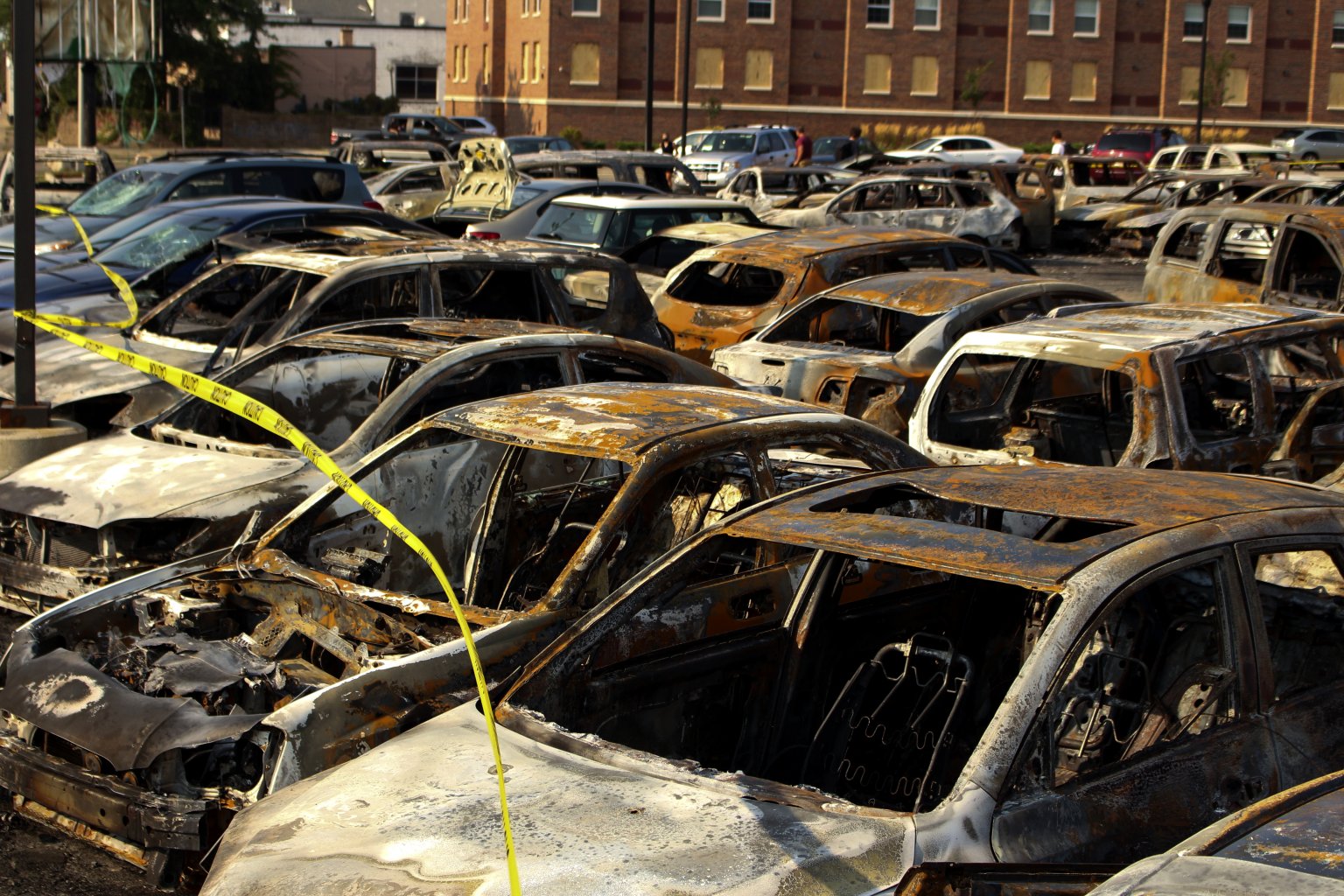 Burned out vehicles in Kenosha. Photo by Henry Redman/Wisconsin Examiner.

The same day that President Donald Trump visited Kenosha to meet with law enforcement and hold a roundtable discussion with local officials and business leaders, Gov. Tony Evers and Democratic state representatives from the area announced a new program to help Kenosha businesses, many of which have been damaged by vandalism and looting in the wake of protests of the police shooting of Jacob Blake.

The state is making no-interest loans of up to $20,000 available to businesses for repairs, restoration, clean-up, operating expenses, temporary space and payroll for businesses that were affected by the upheaval and suffered damages over the last week. The total of $1 million allocated in funding for the Disaster Recovery Microloan (DRM) Program — a new WEDC program introduced in 2018 — would mean that at least 50 businesses could get funds if all collected at the maximum amount.

“After the tragedy, damage, and destruction the Kenosha community has witnessed, I hope we can now come together to heal and overcome divisiveness,” said Rep. Tod Ohnstad (D-Kenosha). “As we look to the future, I appreciate this additional support from Gov. Evers to help us repair and rebuild the city we all love.”

Businesses that had “measurable physical damage because of the unrest,” according to WEDC, and that plan to resume operations in the community are eligible for the loans.

The Kenosha Area Business Alliance (KABA) is working on details with the Wisconsin Economic Development Corporation (WEDC), and there is no count yet of how many businesses might be eligible and in need of repair loans. KABA is the same group that helped distribute COVID-19 relief funds recently, so they have recent experience in dealing with disasters.

KABA’s finance director Brock Portila says information is continually coming in and the business alliance is working with other Kenosha groups to develop an accurate picture of the needs and the severity as some businesses were completely burnt to the ground. “Others were — and I can’t believe I’m saying this —  fortunate enough to maybe just have a window broken,” says Portila. His group, which represents around 330 businesses in the area hopes to get funds “on the street” as quickly as possible, particularly because many of the businesses were already suffering from being closed and other effects from the pandemic.

“A lot of businesses large and small were dramatically impacted by COVID-19,” says Portila. “They had just started opening back up and then you get punched in the gut with this. Some businesses … are certainly devastated.”

“We’re a pretty resilient community,” he adds, noting that KABA has been hearing from individuals and leaders of corporations and businesses, both local and from outside the area, who are calling to see how they might be able to help as well. Working with Downtown Kenosha Inc. they gathered more than $40,000, according to a Facebook post from groups and have corporations willing to provide matching funds to the Kenosha Businesses Recovery Fund at its GoFundMe page.

During his Tuesday trip to Kenosha, Trump announced aid he asserted would be coming to Kenosha including $1 million for Kenosha law enforcement, $4 million for small businesses and $42 million for statewide public safety, including law enforcement and prosecutors. However he provided no details on when or where that funding would come from, so it is unclear how or if it would materialize. As he began his tour of businesses he told reporters, “We’re going to get it fixed up, we’re going to help people rebuild their businesses in Kenosha…we’re getting it straightened out.”

A lack of clarity and misinformation surrounded other aspects of Trump’s visit and round-table meeting. The president made several false statements before and during his Kenosha trip, including saying he saw a video of Mayor John Antaramian’s house being broken into, and saying he was a “very stupid mayor” for listening to the protesters. Trump also falsely claimed to have been the one to send in the National Guard (tweeting that Kenosha only exists today because of his help) although members arrived Monday Aug. 24 on Evers’ order.

Resilience has become a theme for Kenosha — written in signs and on piles of debris with the logo: #KenoshaStrong.

“I am devastated by the events that have taken place in Kenosha, but Kenoshans are resilient,” said Sen. Bob Wirch (D-Somers). “This is a clear signal that the state is ready and willing to help our community rebuild and to ensure our small businesses can get back on their feet.”

WEDC Secretary and CEO Missy Hughes added that currently many businesses in Kenosha and elsewhere are still struggling to get back on track, particularly small businesses.

“WEDC is focused on this vital sector of our economy and helping our communities to recover from these shocks and aftershocks,” she said in a statement. “We will continue to leverage our resources and partnerships in our efforts to assure economic well-being for all the citizens of Kenosha and Wisconsin.”

One thought on “Evers Offers Disaster Help to Kenosha”