Plus: New pub-style restaurant in Cudahy, and Fiddlehead's Coffee cafe in Tosa. 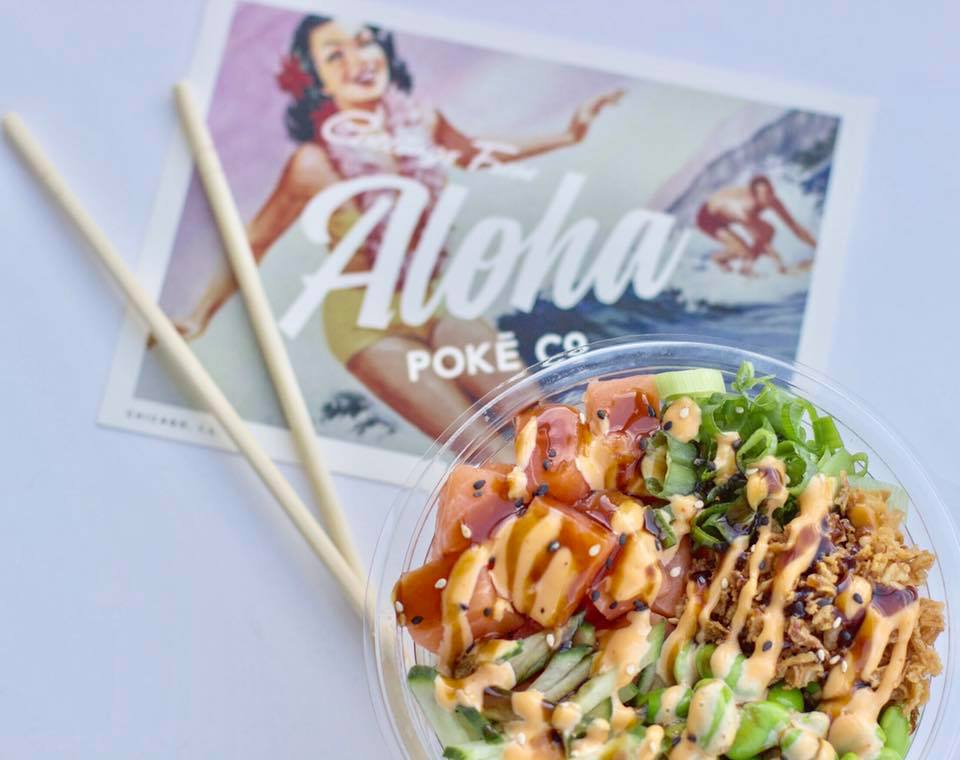 Aloha Poke, the Chicago-based chain that’s been making its way up to Wisconsin, has opened its second Milwaukee location in the old Panda Hut building located at 1417 N. Wauwatosa Ave. Aloha Poke’s first Milwaukee location was opened in the Third Ward in 2018 at 220 E. Buffalo St. OnMilwaukee’s Lori Fredrich reports:

The restaurant … offers a variety of poke bowls, from Hawaiian-inspired raw bowls and house flavors to “Pack Your Own Bowl” options …

“We’ve been blessed with an amazing core of customers and our staff continues to make the experience welcoming and enjoyable for anyone ready to try some amazingly fresh poke,” said Tom Wang, who co-owns both locations with his brother Brian Wang. “We’re embracing carry-out and delivery options for our guests and our bowls travel incredibly well, which makes the experience great no matter where you’re enjoying them.”

Aloha marks the third Poke restaurant to land in Wauwatosa, which boasts R&R Poke, just scant steps away at 1460 Underwood Ave. and Freshfin Poke, which opened in July at 6927 W. North Ave.

Aloha Poke in Wauwatosa is open seven days a week from 11 a.m. to 8 p.m. Orders can be placed online at alohapokeco.com.

What started as a small business venture selling flatbread out of Middle Eastern grocery stores has now evolved into a full-fledged bakery. Taqwa Obaid opened Taqwa’s Bakery and Restaurant on July 31 at 4651 S. 27th St. in Greenfield, just across he street from the Milwaukee border. The bakery specializes in taboon, a fluffy, soft and chewy flatbread. Journal Sentinel’s Carol Deptolla reports:

The bread is Obaid’s mother’s recipe. “She taught me how to do it” in the months just before her mother died, Obaid said.

“It’s all my mom’s recipes. People just keep asking for it,” Obaid said.

The restaurant serves main dishes ($9.99 to $15.99) including shish kebab, grilled half chicken and lamb chops.

Obaid’s dawalee have been popular since she began catering, she said. At the restaurant, she serves her mother’s Palestinian recipe for smallish rolls of grape leaves filled with ground beef and rice alongside a quarter chicken, cucumber-yogurt salad and bread.

The restaurant, which has table service at its 10 or so tables inside and several tables outside, serves Middle Eastern breakfast items ($2.99 to 7.99) all day, such as the cream cheese spread labneh, falafel or diced potatoes with eggs, as well as sampler platters ($9.99 and $24.99).

It serves its bread baked to order, and customers can choose toppings ($4.99 and $5.99) that include zaatar, the mix of thyme, sumac and sesame seeds with olive oil, or seasoned ground beef with tomato and onion.

Until the drive-thru opens, customers can pick up carryout orders inside the restaurant; call ahead at (414) 539-6878.

JC’s Parkside has a full bar featuring everything from craft cocktails like handmade Old Fashioneds and Manhattans to a solid selection of beers in cans, bottles and on tap. The food menu is comprised of burgers, sandwiches, pizzas, salads, wraps, nachos and tacos. Almost everything is $10 or less.

An affiliate of Fiddleheads Coffee Roasters, a Thiensville-based coffee roasting company, has purchased a retail building located at 8807 W. North Ave. in Wauwatosa. If all goes according to plan, this building would be Fiddleheads’ eighth location. Biztimes’ Alex Zank reports:

The company is currently working with the city to secure necessary approvals to open a new location in the building, Mahnaz Marcy, a spokesperson for Fiddleheads, said. The goal is open sometime in the spring.

Fiddleheads chooses locations in part based on their proximity to existing locations. This is a reason the company had its sights set on Wauwatosa.

“Having a close-knitted area to deliver our fresh food items every day is what makes sense, so stretching from Menomonee Falls into Wauwatosa was our next step in planning,” Marcy wrote…

The coffee company is in growth mode.

Earlier this year, Urban Milwaukee shared news that the Mequon Public Market had lost three of its tenants: Bavette La Boucherie, Beans and Barley and Bowls. Those restaurants decided to focus on their brick-and-mortar locations during the pandemic. However, the market has quickly filled those vacancies with new tenants. Biztimes’ Maredithe Meyer reports:

The former Bowls space is now home to Falafel Guys, which moved in earlier this month, downsizing from its stand-alone Thiensville location. The business also operates a food truck.

Shaffer Development received more than 20 inquiries for the available tenant space, which may seem surprising given the current economic climate and restaurant industry downturn, but Shaffer sees the appeal.

“Being in a public market setting makes it more affordable than owning a large sit-down restaurant,” she said, referencing Falafel Guys’ recent move. “They had a whole restaurant and now they’re paying for a smaller space per square foot, but yet they have shared access to the remainder (of the space).”

Not even big name restaurant chains have been able to make it through the COVID-19 pandemic unscathed. The Applebee’s located at 624 W. Holt Ave. in Bay View has shut down and is selling off many of its assets. Milwaukee Record’s Tyler Maas reports:

While signage posted on the doors of the chain restaurant claims the closure is only temporary, the property is currently available to lease. Oh yeah, the Applebee’s location is currently auctioning off pretty much anything and everything left in the restaurant.

“The W. Holt Ave. Applebee’s location has closed,” the listing says. “Now, the remaining food service equipment in the location will be sold to the public.”

Bernie’s Taproom has announced via a Facebook ad that it would be officially closing on August 29. The taproom will be throwing one final celebration all weekend, promising music, beer and shot specials. Journal Sentinel’s Jim Riccioli reports:

… Bernie’s, which opened in 2012, has become the latest victim in a pandemic that has claimed numerous small businesses since March.

Kimberly Wellhausen, the bar’s manager, told the Waukesha Freeman that the coronavirus contributed heavily to a less-than-ideal reality for the business, which had been losing customers even before the pandemic closed the bar for three months.

The building is reportedly for sale, with a pending offer.