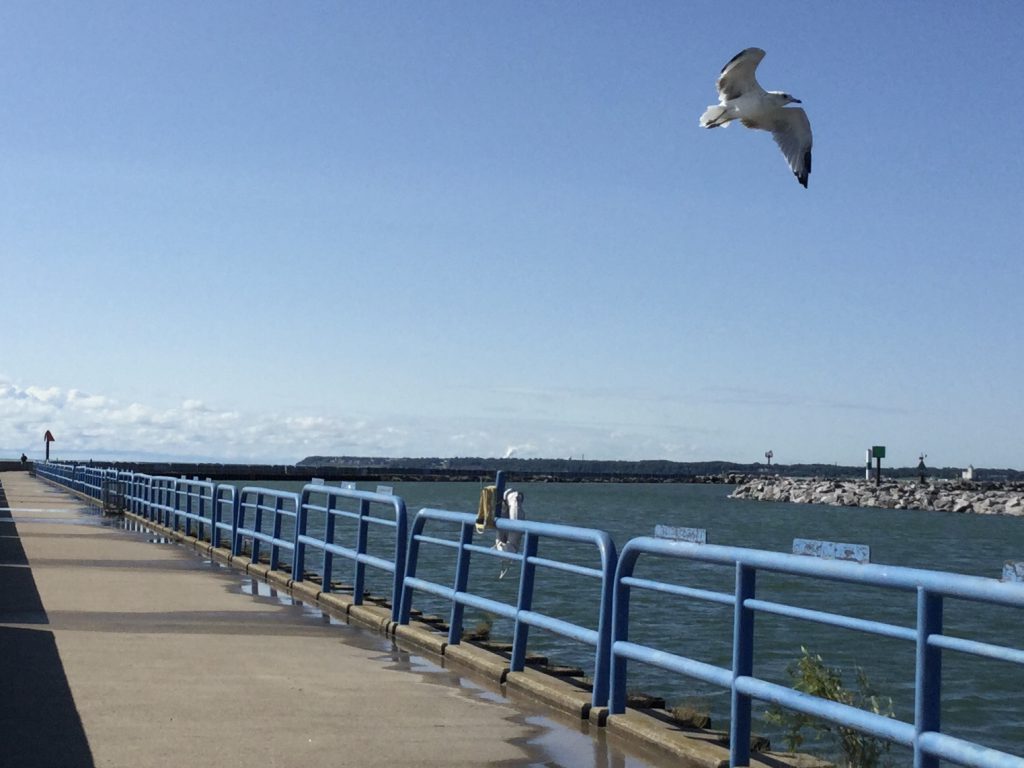 On a sunny windy day when the sky is clear and the surf is up, head for Lake Michigan and Government Pier. This stroll on a concrete pier, a one-mile round trip, has spectacular views of Lake Michigan, the city’s skyline and the harbor. When waves crash on the boulders and onto the pavement on the north side of the pier, you’re reminded why Milwaukee is a great city on a great lake! Yes, your feet will get wet. It’s exhilarating.

The walk starts at McKinley Beach where there’s a playground and plenty of pristine sand for building castles. This sweet little beach resembles a tiny harbor, though the sign that warns of potential rip currents, is a reminder that when the lake gets churned up, it can be dangerous. A rip current, or rip tide, happens on windy days when incoming waves, not gentle riffles, create a band of water that can pull a swimmer away from shore. This happened July 19, 2020 when a nineteen-year-old male went into the lake to assist two young children who struggled to return to shore. Caught in a rip tide, he drowned. That happened again on August 8, 2020 when a 50-year-old man and a teenage boy drowned, pulled underwater by that dangerous rip tide.

McKinley Beach fronts Lincoln Memorial Drive, the result of a landfill project that took 22 years from 1907 until Lincoln Memorial Drive opened in 1929. Before the landfill, the drive as we know it, was under water, until the state gave the city a 300-yard-wide strip of lake bed along the shore from Juneau Park to Lake Park. The dual purpose of this landfill project was to create public recreational space and to halt erosion from storms coming off the lake. I once overheard a teacher explain the landfill to her class. She got their attention when she said, “You are standing on a large garbage dump.”

The effort to halt erosion wasn’t 100 percent successful. In 1987 the McKinley Beach Restoration Project used boulders from the Milwaukee Metropolitan Sewerage District’s deep tunnel project to prevent erosion after a storm upended chunks of the original landfill. Again in 2020, the lake uprooted a chunk of walkway adjacent to McKinley Beach. It found a path through the boulders, and once again, damage control needed.

From McKinley Beach, face downtown and head through the parking lot toward the concrete pier known as Government Pier. You’ll pass huge rocks, part of the reconstruction project, and four boat launches, before you arrive at the entrance gate to the pier. This concrete walkway, part of the U.S. Army Corps of Engineers Navigation Project, stretches for a half mile into Lake Michigan, a fine place for walkers and fishermen to spend an hour or a day. And so they do. On any summer day, fishermen who settle into chairs alongside the lake do not look especially concerned about whether the fish are biting. They come with rods and reels, beer and cigarettes, buckets, lunch and often music. “Where can you get better fresh air than here?” appears to be the prevailing sentiment.

The view is stunning. The eye is drawn to the south, Downtown, and beyond to a harbor filled with boats. There might be a lone kayak outside the harbor, skimming the waves, looking like a leaf accidentally blown onto the lake’s surface. Look south to see past the Hoan Bridge, and down the lake shore, all the way to Bay View. Behind you, pancake stacks of apartments and Milwaukee mansions line the bluff, and dead ahead is Lake Michigan, open water and infinity.

There was a day, July 7, 2010, when an angler made history on the pier. He snared a 48-inch muskie using alewives for bait while he was targeting salmon. According to the Journal Sentinel, “…such fish are virtually unheard of in the southern waters of Lake Michigan.”

The North Gap navigation point at the end of the pier marks the entry to the harbor, the place where boats can pass from Lake Michigan into sheltered water and the McKinley marina. A concrete barrier tells you to return to start, refreshed and ready for a meal across Lincoln Memorial Drive at Colectivo, or, a burger up the road at Moosa’s, after a good walk and those invigorating lake breezes. 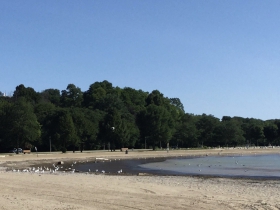 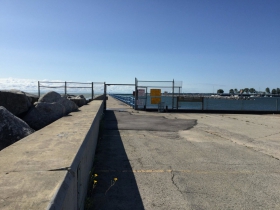 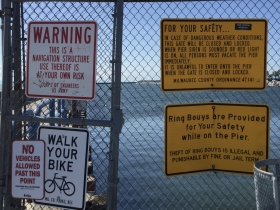 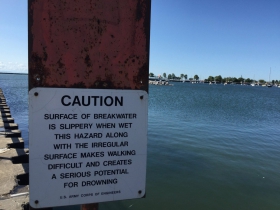 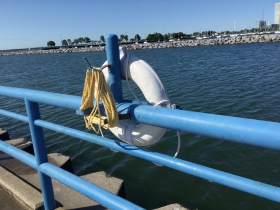 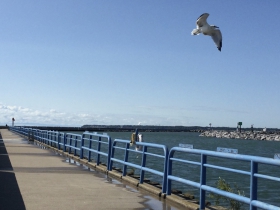