Art pieces are already going up in Milwaukee aimed at turning out voters against Trump. 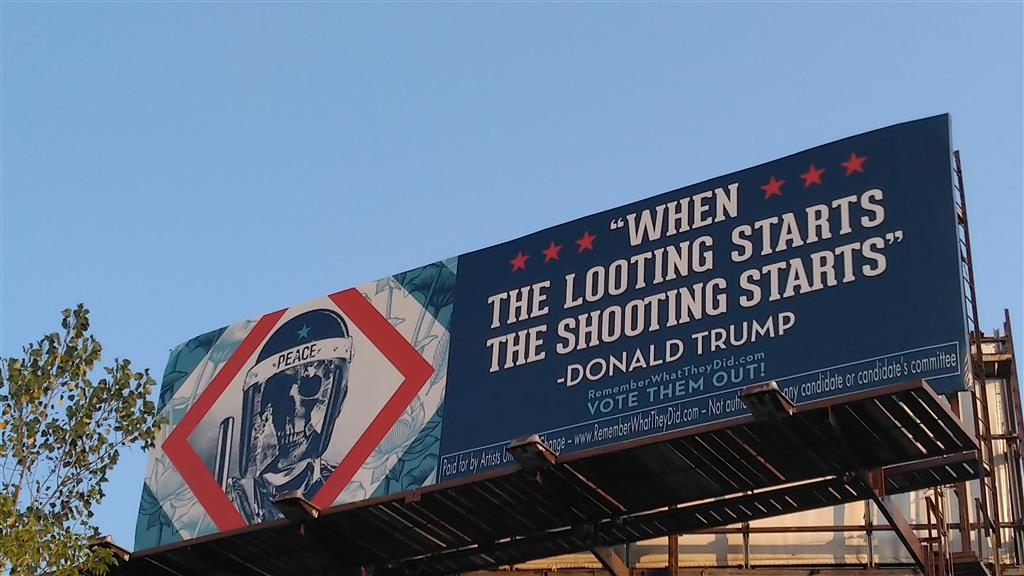 The campaign, called “Remember What They Said”, is intended to galvanize swing-state residents to vote against Trump and his allies in the November elections.

One billboard, designed by Nate Lewis of New York City, that will run in Milwaukee includes the Trump quote “that’s going to sort of just disappear, I hope.” The President said this about the COVID-19 pandemic on July 1st, during an interview with Fox Business. This billboard is on W. Becher Street near Interstate 94.

The billboards are art pieces designed by a handful of artists from around the country. In Milwaukee the billboards put up thus far feature Lewis’ work, along with a piece by San Diego based artist Rafael Lopez, and another by artist Shepard Fairey.

The campaign is being organized and staffed by politicos from the campaigns and administration of former President Barack Obama. One of the co-founders, Scott Goodstein, worked for the Obama campaign in 2008 and Sen. Bernie Sanders presidential campaign in 2016. The other founder, Robin Bell, is a multimedia artist that produces pieces with a political angle.

The billboards are going up in major cities in four states expected to be key to winning the presidency in 2020: Wisconsin, Pennsylvania, Michigan and Arizona.

A statement from the campaign said it “aims to connect the energy in the streets in recent protests to the importance of voting, by starkly portraying the worst atrocities perpetrated by President Trump and his allies.”

On the group’s website, visitors are urged to register to vote or donate to the campaign to keep it going. “Some 40 percent of voters aren’t reached by the usual voter-file matched political advertising and many of these voters are in communities that are underrepresented at the polls,” said Goodstein in a statement.

In Milwaukee, Lopez’s piece shows a quote from Sen. Lindsey Graham (R-SC) that reads “I don’t care” against a backdrop of a migrant behind bars. In 2019, Graham said he didn’t care if migrants were spending hundreds of days in detention facilities. This work can be seen on a billboard near Saveland Park.

Fairey’s Milwaukee piece shows a skeleton wearing a police riot helmet, next to the image is a quote from Trump saying, “When the looting starts the shooting starts.”

“My art piece is a reminder that while the American public was protesting in the streets, in record numbers, against racism and police brutality, Donald Trump was encouraging police brutality against the protesters, reinforcing the very same problems within law enforcement and the criminal justice systems the protesters were demanding to be reformed,” said Fairey in a statement.

Moira Muntz, a spokesperson for the campaign and a former Obama administration official, said the organization has had trouble convincing some billboard companies in Milwaukee to put the images up, “especially art attacking white supremacy.” One piece in particular, by artist Nekisha Durrett, shows white-supremacist protesters from Charlottesville superimposed over a historic image of Klansmen. It’s accompanied by the Trump quote, “We must build upon our heritage.” Trump said this in June, after signing an executive order that incentivized police reforms, during a time when demonstrators were pulling down confederate statues.

“For these billboard companies to specifically reject art that is anti white supremacy is disturbing,” said Goldstein. “Especially while allowing right-wing anti-abortion propaganda all up and down the interstate.”

Recently there were plans for another public art piece by Fairey in Milwaukee. A 10-story story mural was supposed to be installed on the southern wall of the Railway Exchange Building at 229 E. Wisconsin Ave., a historically protected building, before the Democratic National Convention.

But, much to the building owner’s dismay, the city’s Historic Preservation Commission rejected the proposal. The body said it had not completed its mural guidelines, but the proposal also faced opposition from a letter-writing campaign in opposition to Fairey in particular.

The campaign, centered on a letter signed by over 130 people, said it was inappropriate to provide “resources to a problematic white male artist.” The letter cited that Fairey was sued for using an image that wasn’t in the public domain when he created his famous “HOPE” image of Obama. That suit ultimately led to criminal charges against Fairey for destroying evidence. Fairey paid a fine and completed community service. 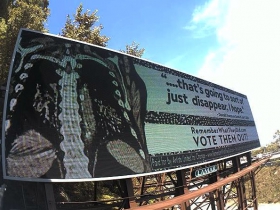 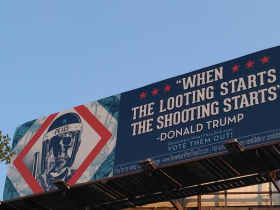 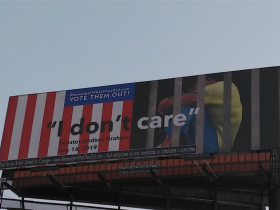 One thought on “Billboard Campaign Aimed At Swing State Voters”