Kyric’s Lemonade Is a Sweet Success

Nine-year-old Kyric Burt had the vision and drive to create a boffo business. 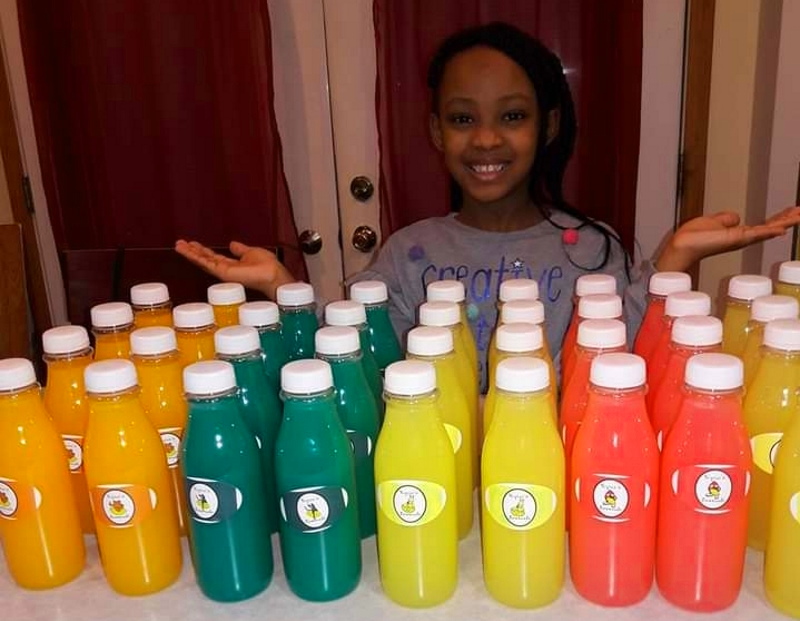 A home-brewed lemonade business is seeing its bottles flying off the shelves — even during a pandemic.

“This lemonade is really good and you should try it,” says Kyric Burt, the nine-year-old entrepreneur behind Kyric’s Lemonade.

Kyric and her family have been making and selling lemonade for about a year now — starting as a simple lemonade stand outside the Greater New Birth Church but evolving into various flavors of sweet and tangy lemonade sold by the gallon. When the COVID-19 shutdowns hit in March, production screeched to a halt. But that didn’t stop people from asking about the lemonade — and Kyric’s Lemonade gave the people what they wanted.

“There was an amazing pour of support, even before our first news interview,” says Nikki Burt, Kyric’s mother. “It helped us as a family to come together and build Kyric’s business. It was like a family affair.”

And the business itself really is a family affair — the labels on the Kyric’s Lemonade bottles are designed by Nikki’s niece My’chree Harris, who runs her own photography business, and some bottles are carried and sold by William’s Pantry — a convenience store run by family members and located at 10734 W. Hampton Ave.

Kyric’s Lemonade continues to grow as a business. The Burt family is straying away from selling by the gallon ($10 each), and hopes to focus just on selling 16 oz. Bottles ($2 each). They’re also revamping the taste.

“You think of a nine-year-old and she just loves sweet,” says Nikki. “So it’s really, really sweet so we’re cutting back on some of the ingredients so that it’s not so sweet.”

Current flavors of lemonade for sale include Pink, Blue, Orange, Regular and Pineapple. Only purified water is used, and fresh-squeezed lemons are a key ingredient. Kyric suggests trying the Blue Lemonade.

Get a daily rundown of the top stories on Urban Milwaukee
“Everything I like is blue and it’s got that good taste,” Kyric says.

Orders can be made through the Kyric’s Lemonade Facebook and Instagram pages. Payments are made through Paypal or Cashapp, and the lemonade is then available for curbside pickup. But the Burt family hopes to break through just online orders and selling out of the family’s convenience store.

“Any place that sells any type of beverage — I want her there,” says Nikki. “I want to create generational wealth, and it is my desire that this business carries on for her children and her children’s children.”

It’s a lesson that Nikki hopes teaches Kyric the value of a dollar and the importance of knowing how to achieve that dollar. But Kyric isn’t the only one learning from this business.

“I believe that our children will lead the way and lead us down the path that they want to go, so the lesson I’ve learned as her mom is to just have a good listening ear and do it the way she wants it done,” Nikki says. “She knows what she wants to do. I’m shocked still that she gets up with lemonade on her mind and goes to sleep with lemonade on her mind and just wants her business to be successful.”

The value of a dollar isn’t the only lesson being learned. Kyric decided to give back to the community by donating to the Wisconsin Humane Society as a way to her meet her parents in the middle when she was told she was too young to have a pet rabbit.

“It’s important to me because they’ve got a lot of animals and if I feel like I could help them get some animals out of there, they can bring in other animals and help more,” says Kyric.

She’s also donated gallons of lemonade and hygiene products to VETS Place Central in support of homeless veterans. Kyric plans on continuing to give back, with St. Jude’s Children’s Hospital next on her list.

“Listen, I’m her mom and I still get all jittery on the inside,” Nikki says. “She gets it — she’s going to give back and I really love that about her.”

Kyric is unsure what’s next for her lemonade business other than to continue the business’ reach while giving back to the community. When asked what she wants to do when she’s older, she says she wants to be a model, or perhaps a makeup artist. But for now, selling lemonade is what makes her happy.

“I like when people smile when they taste my lemonade,” Kyric says.