The Magic of Reynaldo Hernandez 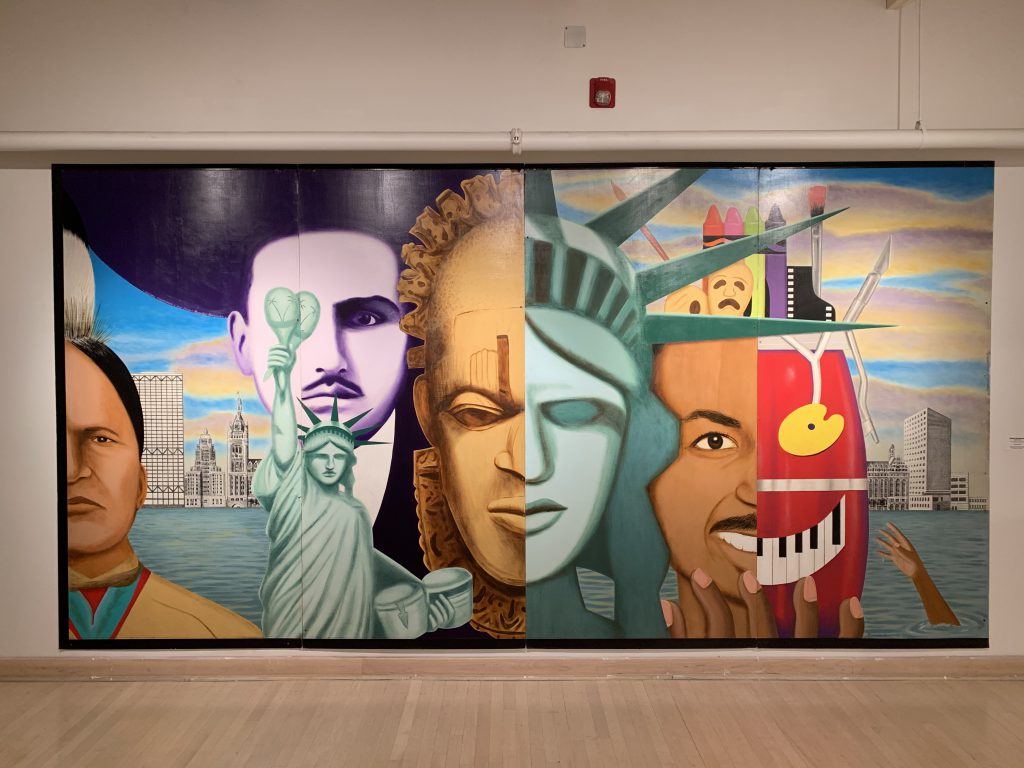 Murals were arguably the very first form of art, dating back to when neanderthals etched on walls with any kind of material that could be found. In more recent decades murals have become a medium for social commentary and a weapon against fascism, racism and classism. Bright statements methodically painted on brick walls or plaster can create a powerful message a viewer can be inspired by while immersing yourself into pools of colors, lines and angles. One of the most recognizable murals in Milwaukee is the Peace mural on 6th and National, on the side of the old Esperanza Unida building. It is definitely the “Welcome home” image for a lot of south siders, particularly those raised in the Walker’s Point area before gentrification started seeping in. The image can be seen from I-94 south, an eagle looking over a rainbow and a dove flapping its wings majestically. It was painted in 1994 by Reynaldo Hernandez, a Milwaukee native born to Mexican and Black parents. 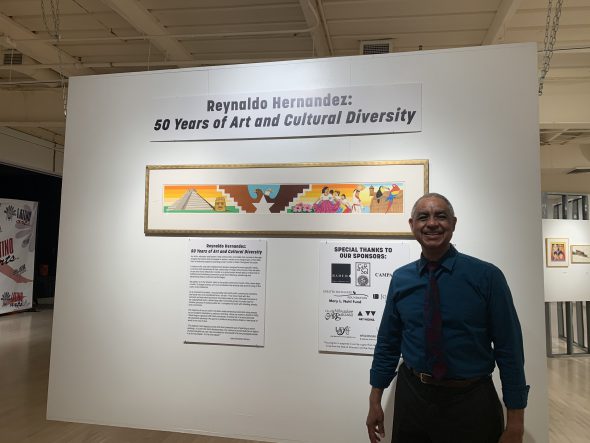 There is a new exhibition of his work on display at the United Community Center’s Latino Arts Inc. gallery, which has served as a kind of museum of Milwaukee’s Latino/a/x history as well as a school and a community center. Entitled “Reynaldo Hernandez 50 Years of Art and Cultural Diversity,” it is curated by Jacobo Lovo, a friend of Reynaldo’s and managing artistic director at Latino Arts, Inc. The gallery features photographs of murals done by Reynaldo, ones that remain in the city, and others that have long since disappeared. There is a wall dedicated to his caricatures, something Reynaldo has always liked doing. There are also his courtroom sketches of trials that were important in Milwaukee history.

The show runs the full gamut of everything he has done, past and present. Passion is evident in every piece of his, particularly the story of Roberto Clemente, which is told in panels and descriptions written beneath. Versatility is in no short supply, as painted congas on display in the gallery will also tell you. The work offers a mix of expressionistic, abstract and psychedelic styles.

Murals have been enjoying a renaissance in Milwaukee, and Reynaldo is happy to see it. “Murals are one of the most effective ways to illustrate the current climate, no matter what decade it may be,” he tells me. His five decade career as an artist can be seen all over the state of Wisconsin. However, it is in Milwaukee where he has left the most indelible mark. He has become one of the strongest voices for people of color, as his images can be seen in neighborhoods populated mostly by black and latino/a/x folk. His style encompasses decades of anguish, but presents it in a propitious way.

AfroLatinidad culture is a strong current in all of his work, with themes of strength of perseverance, and an inner peace in the face of adversity. The work typically features bright colors, sometimes with sullen or proud faces looking off into the distance. It can evoke the revolutionary mindfulness of the 60s and the whimsical joy of funk album covers from the 70’s. His art makes me think of heavy bass lines overlapped with heartening lyrics sung in cheering choral harmonies. I asked him what kind of music he listened to when he painted back in the 70’s, telling him i was really feeling “Time” by the Chambers Brothers when looking at a 1969 painting of his called “Migdalia”. “Which version?” he asked. “The 14 minute one,” I responded. “My man,” he smiled through his mask as he gave me an elbow bump.

“Reynaldo Hernandez 50 Years of Art and Cultural Diversity,” will be on display five days a week from 9 a.m. to 8 p.m, until October 2nd, at the Latino Arts gallery, 1028 S. 9th St. You have to register to see the show at www.latinoartsinc.org so as to properly maintain social distancing rules. Suggested donation is $1. 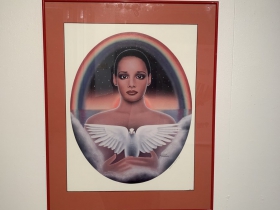 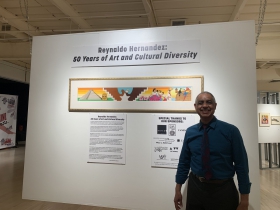 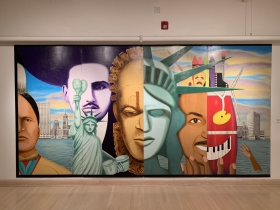