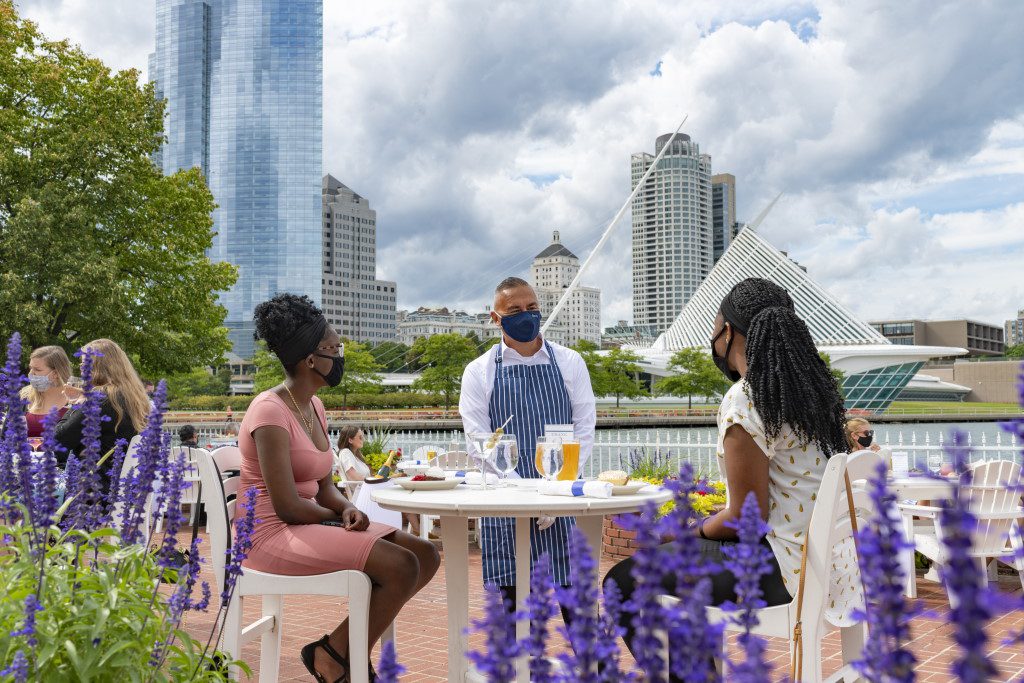 The Bartolotta Restaurants announced back in June that it would begin a “phased reopening,” in which it would slowly reopen its 17 restaurants that shut down in mid-March. On Thursday, the restaurant group announced that Harbor House and Mr. B’s — A Bartolotta Steakhouse are the next to reopen. BizTimes’ Maredithe Meyer reports:

… Harbor House in downtown Milwaukee will reopen on Thursday, Aug. 20, and Mr. B’s – A Bartolotta Steakhouse in Brookfield will reopen on Wednesday, Sept. 2.

Harbor House will reopen with an updated menu, focusing on New England seafood dishes. Its indoor dining room will host live jazz performances by the Mark Davis Duo from 6 to 9 p.m. Wednesday through Sunday.

The interior of the restaurant has been updated with custom dividers between tables, palm trees and flowers and redesigned floors.

Mr. B’s will reopen with its signature menu and a redecorated patio, which includes an external fireplace, new linens and greenery. Custom-made dividers have also been added to the interior dining room.

Mr. B’s will be open Wednesday through Sunday from 5 to 9 p.m. Diners with reservations after 8:30 p.m. can order wine for half off.

As part of The Bartolotta Restaurants’ new safety measures, diners are required to wear face masks when entering the building and seated while interacting with staff, who are also required to be masked. Diners must also place reservations and will be subject to temperature checks upon entry.

Reservations are required and turn times are kept to about 90 minutes.

Crab It Your Way Reopening

The downtown restaurant specializing in Louisiana-inspired cuisine and seafood boils, is preparing to reopen after shutting down due to a lease dispute. Crab It Your Way, located at 823 N. 2nd St., is a newer place that was barely open for six months before it closed. OnMilwaukee’s Lori Fredrich reports:

Fortunately, that dispute is in the end stages of being resolved, so the restaurant is currently hard at work in preparation for reopening.

According to Zach Martinez, long-time consultant on the project, owners Devonzell Hollingsworth and Andre Johnson are aiming to reopen the restaurant as soon as mid-September.

Martinez says they’ve been lucky to have retained or re-hired a good portion of the venue’s original staff, and plans are being put into place to offer both carry-out and implement patio seating, along with socially-distanced indoor dining.

The plan will be to start off with a slightly smaller menu to start, evolving to offer a full complement of dishes as the restaurant moves forward.

Downtown fine-dining restaurant Carnevor, located at 718 N. Milwaukee St., will reopen on August 18 with new safety protocols in place. The restaurant had previously reopened in April for carry-out, but closed again shortly after. Fredrich reports:

… guests are strongly encouraged to make reservations for dine-in service, due to a limited capacity to maintain safe social distancing. Upon arrival for their reservations, guests are asked to maintain social distancing while being guided to their tables. Guests are asked to abide by the city’s mask mandate by wearing a mask in all common spaces within the restaurant. Guests are also encouraged to access the Carnevor menu on their phones to eliminated unnecessary contact with paper menus.

The restaurant has enacted numerous safety protocols to ensure a safe experience for guests and employees. Health and temperature checks will be required for all employees, and employees are asked to practice safe social distancing both at (and outside of) work to maintain their health and safety. In addition to advanced cleaning protocols throughout the restaurant, additional handwashing and sanitation stations will be available for use by both guests and employees.

Dead Bird Brewing, at 1726 N 5th St., has announced via a Facebook post that its new outdoor patio is open and available for online reservation. The patio features three picnic tables and three bistro tables, all of which can be reserved on the brewery’s website. The picnic tables seat up to eight people each and the bistro tables seat up to four. The outdoor seating is placed along the brewery’s bioswale, giving patrons a front-row view of plants and flowers native to Wisconsin and the Midwest. Along with the new patio comes new hours of operation. The brewery will now be closed Sunday, Monday and Tuesday, which will allow an extension of its Saturday hours so that customers can enjoy the patio later.

According to a press release from Hospitality Democracy, a limited time pop-up restaurant called Brew City Biscuits will take over the Third Ward BBQ joint Smoke Shack (322 N. Milwaukee St.) every Saturday and Sunday until September 6. The press release reads:

Brew City Biscuits will be serving southern-style, unapologetically indulgent brunch fare with a focus on buttery scratch made biscuit sandwiches. The breakfast sandwiches tower high with classic brunch ingredients and a nod to popular menu items across the Hospitality Democracy restaurant group. The Marty McKlucken, one of Brew City Biscuit’s most colossal sandwiches, is topped with Nashville hot chicken, sweet and spicy pickles, lettuce, tomato and buttermilk mayo.

A look at the menu shows that biscuit sandwiches will be at the forefront of the pop-up. Brunch sides include waffle fries covered in your choice of cheddar, sausage or beer gravy, with the option to upgrade it to a poutine. Brunch cocktails will also be available, including Bloody Mary and Mimosa flights. And if somehow nothing on the Brew City Biscuits menu sounds appetizing, some Smoke Shack favorites will also be available.

At 6,800 square feet, Eldr + Rime in Wauwatosa might be the largest restaurant opening of the year in the Milwaukee area.

The restaurant’s debut menu has plates to share (like carrot pate with seeded rye flatbread and venison tartare with waffle), chilled and cooked seafood dishes (oysters on the half shell, grilled prawns) and main dishes that range from a $16 grass-fed-beef burger to 32-ounce, $78 tomahawk rib-eye steak, with entrees like seared scallops with cauliflower and speck cracklings ($35) in between.

Golden Nest Pancakes & Cafe, which originally anticipated a February opening, is now officially open at the Mayfair Collection at 11250 W. Burleigh St. Deptolla has the scoop:

Golden Nest serves Benedicts (the Irish has corned beef, $14), omelets (the Wild Mushroom, with prosciutto and mozzarella, is $12.50), skillets (linguica hash combines the Portuguese sausage with root vegetables and kale, $14), chilaquiles ($12.50), pancakes (strawberry cheesecake, $13), crepes ($10 to $13) and more for breakfast.

Besides coffee, espresso drinks and smoothies, the restaurant has Bloody Mary and Mimosa variations, as well as beer.

Sorella, a new restaurant that will focus on Italian food at affordable prices, is set to open at 2535 S. Kinnickinnic Ave. on August 21. The restaurant is a partnership between Chef Kyle Toner (formerly of Grass + Griddle and Wolf Peach) and Paul Damora (formerly of Glass + Griddle, Levy Restaurants and The Capital Grille). Fredrich reports:

The restaurant will open by reservation only with seating available on the restaurant’s well-appointed patio. Moving forward, the kitchen will also implement carry-out with alley-side pick-up just behind the restaurant.

When patio season is over, Toner says they will convert to the use of their spacious indoor dining room, which can easily accommodate 45 socially distanced guests…

Starters include fried bites including arancini carbonara, traditional fried rice balls with guanciale, pecorino, egg and black pepper; along with antipasti like roasted broccoli with apricots, chilies and almonds …

Pastas will include options like Fusilli with ‘Monday Sauce’ (broken meatball, sausage and pork ragu) and ricotta; spaghetti alla nerano with zucchini, provolone and basil …

Meanwhile, the wood-fired pizzas – which are likely to conjure fond memories of Toner’s tenure at Wolf Peach …

… entrees will focus on the seasons with options like New York strip with salsa verde, roasted half-chicken with lemon, herbs and pecorino and market fish with garlic, parsley salmoriglio and lemon.