MPD got 62 cents of every new city budget dollar over last ten years.

By Gretchen Schuldt, Wisconsin Justice Initiative - Aug 16th, 2020 11:33 am
Get a daily rundown of the top stories on Urban Milwaukee

“We are looking at how we staff the Police Department and what they respond to….We’re going to have to rethink a lot of things,” said Dennis Yaccarino, city budget and management director.

The 18 remaining departments received combined general budget increases of $48.9 million from 2010 to 2020.

The number of authorized Police Department full-time positions funded through the general budget fell slightly, by 60, from 2,687 to 2,627, over the 10 years, while the number of positions in the other departments fell from 3,117 to 3,103, a decline of 14, according to budget documents.
​
Police Department spending is sure to be a contentious topic during the Common Council debate over the 2021 city budget. ​Activists want to cut up to $75 million from the police budget in 2021 and allocate the amount to other purposes. The council has suggested a 10% trim for the Police Department. 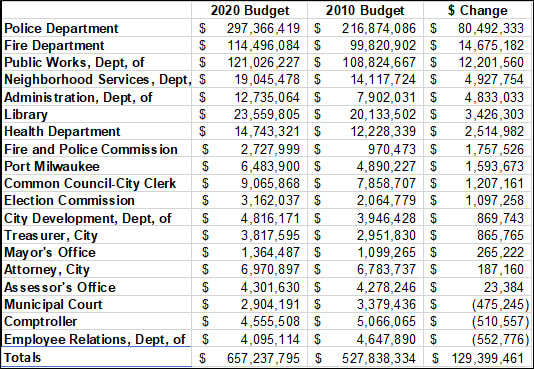 Data from the City of Milwaukee.

The city’s revenue picture has been upended by the coronavirus crisis. Meanwhile, protesters and others have demanded, since the death of George Floyd in May, changes in policing practices.

The city will renew its efforts for an increased sales tax that could be used to help out the city budget, Yaccarino said.

The city this year will publicly discuss budget initiatives – including those involving the police – before Mayor Tom Barrett‘s proposed budget is released in September, Yaccarino said. City officials are working to increase both public understanding of budget issues and input into the process, he said.

The city is seeking input through a budget survey and has posted a tool that allows residents to build their own budget. Both are here.