By Bridget Fogarty, Milwaukee Neighborhood News Service - Aug 15th, 2020 11:41 am
Get a daily rundown of the top stories on Urban Milwaukee 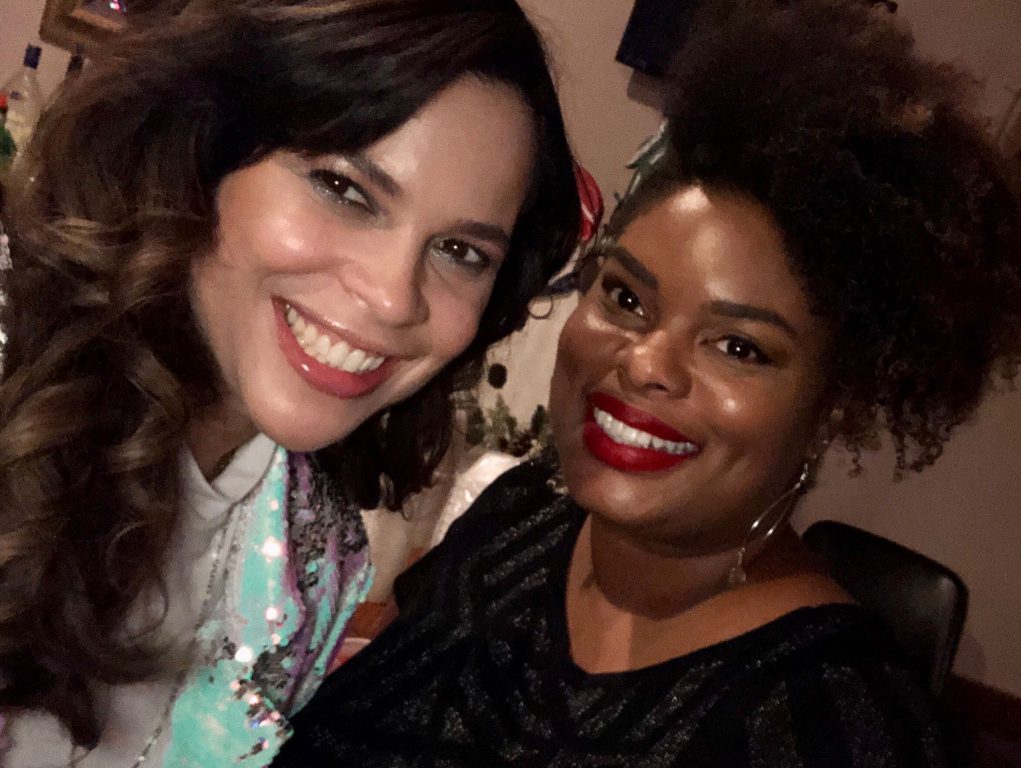 Milwaukee Health Department Commissioner Jeanette Kowalik and her chief of staff, Lilliann Paine, have much in common.

The public health officials in charge of Milwaukee’s pandemic response were born and raised in the city — Kowalik in the Sherman Park neighborhood and Paine on the city’s Northwest Side.

They were both McNair Scholars, a program that prepares undergraduate students underrepresented in graduate education through research opportunities and mentorship, and UW-Milwaukee Panthers. Though they passed through the programs at different times, they always supported each other’s aspirations.

And they both began their careers as interns in the Health Department they now lead.

But there was a time that neither of them wanted to come back to the department.

In the early 2000s, public health leadership was largely dominated by officials who worked through an outdated, strictly medical lens, Kowalik said. The Milwaukee Health Department was no exception.

“When I started my work in infant mortality, no one would say ‘racism,’” Kowalik said. “It was always, ‘What’s wrong?’ and ‘It must be something the moms are doing.’”

Through her jobs, and her own experiences as a mother to one son, she saw how systemic racism impacted health outcomes for African American and Latinx populations, especially for mothers and their children.

She also knows the importance of services health departments offer and the relief they can provide residents, having utilized programs she now oversees when she was pregnant with her son.

Even when others didn’t, Kowalik has always fought for racial equity in health, said Nicole Angresano, a longtime colleague to the commissioner and the vice president of community impact at United Way of Greater Milwaukee.

“She cares deeply about the work she does,” Angresano said. “You’ll know in a few minutes with her this is more than just a job.”

In 2014, Kowalik moved to Washington, D.C., where she led maternal and child health projects that directly addressed the impacts of racism and other social determinants of health — the conditions in which people are born, grow, live, work and learn that influence their health outcomes.

It has been research like that and nationwide movements, Kowalik said, that have inspired Black women in leadership roles to be authentic about the root causes of problems and have helped make their colleagues be more receptive.

As she continued that work into 2018, the Milwaukee Health Department was falling apart.

Former Commissioner Bevan Baker had resigned after what the Common Council called “an egregious public health failure” was uncovered in the department’s Childhood Lead Poisoning Prevention Program. The department had failed to ensure that families of 8,000 children with elevated lead levels in their blood were notified of the contamination.

When Kowalik returned to her home city in 2018 to serve as health commissioner, it felt to her “like a calling.” She had the chance to lead the department through a more equitable lens, and she was going to take it.

As with Kowalik, the outdated methods of the public health field didn’t appeal to Paine, who is 38.

Starting as an intern, “I was like: ‘Who wants to work at the Health Department?’” she said, feeling resistant to the thought of getting stuck in the old ways of public health.

At the department, Paine learned about data and the ways it can tell a story. “Who controls the data controls the story,” she said. “And that isn’t necessarily reflective of the community’s experience.”

While many may know Milwaukee for its high rates of segregation and incarceration that disproportionately affect its Black and Brown communities, Paine has always looked at how that data tells real stories of her home city.

Having grown up a student in the Chapter 220 program — a state-led effort on integration that bused city students to predominantly white suburban schools — she learned how to navigate spaces that were “racially isolating” at an early age.

“And at the same time, I was helping to change those spaces just by being present,” she said. “You learn the rules, and then you learn how to bend them or break them to be that disruptive innovator to create social change.”

She earned her master’s degree from UWM’s Joseph J. Zilber School of Public Health, where she said she learned that “when you opt into public health, you don’t get to opt out of leadership.” She was nominated to serve on the Wisconsin Public Health Association’s board in 2017— and that year’s theme was health equity.

As the only board member of color, she worked on “a platform of compassionate activism” to address her own experiences and those of other underrepresented identities in public health.

“You’re hyper visible and invisible at the same time, but I wasn’t quiet about it,” Paine said. “I was ready to take calculated risks.”

“Lilliann has been so motivated and triumphant in embracing the hurdles she’s encountered and not letting them hinder her,” said Jennifer Woo, an epidemiologist and close friend since they met in 2014 in their “Structures of Inequality and Population Health” graduate school class.

In the bureaucracy of the public health system, Woo said, those who cling to the old ways of practice represent the structures that hold back communities from thriving.

Paine doesn’t let anyone get away with that, she said.

“She holds fast to her convictions, but she’s not someone who is actively grabbing for the spotlight,” Woo said. “She is very supportive of the community she comes from and wants to see it be the best that it can be.”

Paine’s relentless activism and advocacy planted seeds that led to a resolution declaring racism as a public health crisis in May 2018.

Milwaukee County and the City of Milwaukee became the first places in the country to declare racism an emergency and to commit to creating changes in 2019. That pushed many state and local governments nationwide to make their own declarations, according to Pew Research.

“Little did we know, the declaration of racism as a public health crisis would be a guiding light for us as a city and a country,” Kowalik said.

As she began to rebuild the department, she knew Paine should be by her side.

“The Health Department needs Lilliann; the city needs Lilliann,” she recalled thinking before offering Paine the job in 2019. Paine is the first chief of staff to serve Milwaukee’s health commissioner.

“It was Jeanette coming back that convinced me that I should come back to the Health Department,” Paine said. “I felt like with her leadership, real sustainable change could happen — and I wanted to be a part of that.”

Rebuilding in the coronavirus

Stepping into their roles meant inheriting these issues and other critical health disparities that have existed for decades in the city. It also meant taking on a severely under-resourced and understaffed department.

The Health Department is the lowest-funded department in the city, receiving only 2.2% of the city’s 2020 budget. Many of its resources are outdated — the department still doesn’t even have electronic health records, Kowalik said. This was challenging enough before the pandemic.

Despite the limits of funding, Kowalik and Paine mobilized quickly when the coronavirus first hit in March. They  were explicit about tracking race and ethnicity in cases right away. As a result, they began to see how COVID-19 was disproportionately impacting Milwaukee’s communities of color.

The commissioner called her mentor and colleague Georges Benjamin, executive director of the American Public Health Association, to see if he had seen similar trends on a national level. He had heard rumors but found nothing tangible.

“That caused me to do a bit more digging,” Benjamin said. As more municipalities began to trace race and ethnicity in COVID-19 cases, he and other officials nationwide began to see the disparity as well.

“She was one of the first figures anywhere in the country to raise this issue.”

‘They are forward thinkers’

Though no one could have truly been ready for COVID-19, Kowalik and Paine’s longtime fight for equity helped build their muscles for what was to come, Angresano said.

“Right now we are all reacting and we’re all in some ways playing defense against this pandemic,” Angresano said. “But what they have is vision, they are forward thinkers.

“With their upstream prevention, they have the opportunity to create new opportunities for improved health and improved well-being for everyone in Milwaukee, regardless of their ZIP codes,” she said.

The eruption of protests following the deaths of George Floyd and Breonna Taylor has shown public health and government officials they can no longer use “cushy words” to avoid calling out racism, Kowalik said.

“COVID-19 is the great magnifier,” she said. “Everything that we’ve swept under the rug, it’s brought up in our face, and it’s helped show who steps up and who steps back.”

For Paine, the timing to lead Milwaukee’s pandemic response alongside Kowalik in the midst of powerful movements for Black lives feels right and critical, “like a Kairos moment.” — an opportune time to act.

The movements have re-energized the Health Department to revisit the plans that the pandemic put on hold. The city’s five-year community health improvement plan, MKE Elevates, which identifies racism as one of three focus areas, is set to end in 2022.

Kowalik and Paine spend most days in back-to-back Zoom calls and meetings planning for the ever-changing nature of the pandemic.

They finally saw each other in person  in July at the mayor’s signing of the mask mandate – the first time since the state Safer at Home order began in March.

“I think it’s so important for Black and Brown Brown girls in Milwaukee to see these two women of color leading,” Angresano said. “To see leadership that looks like you … they’re authentically themselves.”