Gov. Evers said he expects residents to wear masks when the president visits.

By Shawn Johnson, Wisconsin Public Radio - Aug 14th, 2020 10:10 am
Get a daily rundown of the top stories on Urban Milwaukee 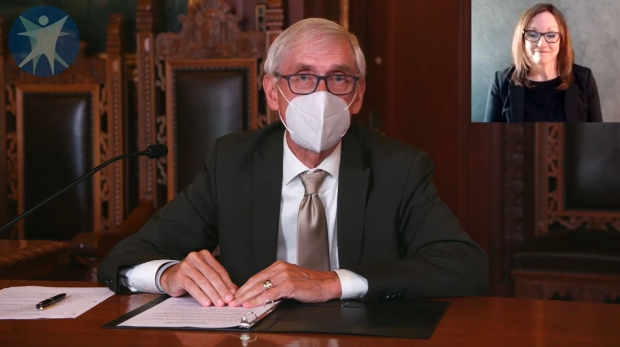 “My expectation is they’re masking up,” Evers said Thursday. “They’re going to follow the order. And that’s our expectation as a state.”

The governor issued the statewide mask mandate two weeks ago over the objections of Republicans who called it an abuse of power. While some GOP lawmakers wanted the Legislature to overturn the governor, at least so far, that hasn’t happened.

Trump and Vice President Mike Pence are expected to visit Wisconsin next week during the dramatically scaled-back Democratic National Convention in Milwaukee. While it’s unclear where they’ll be speaking, Evers said his order requires masks at indoor locations.

Still, Evers said there was nothing inherently political about face masks, noting that Trump himself had recently encouraged people to wear them to slow the spread of COVID-19.

“If you want to follow an ideology, you’ve got plenty of people who are in leadership positions in the federal government that are telling us: ‘Wear a freakin’ mask,'” Evers said.

While national Democrats, including presumptive presidential nominee Joe Biden, will be delivering their DNC speeches virtually this year, Evers said he would speak in-person. He said the relatively small number of people there to watch will be wearing masks and observing social distancing.

“There will be no people in the audience — it will be whatever media are in the room,” Evers said. “So I feel comfortable with that opportunity.”