By Isiah Holmes, Wisconsin Examiner - Aug 9th, 2020 12:48 pm
Get a daily rundown of the top stories on Urban Milwaukee 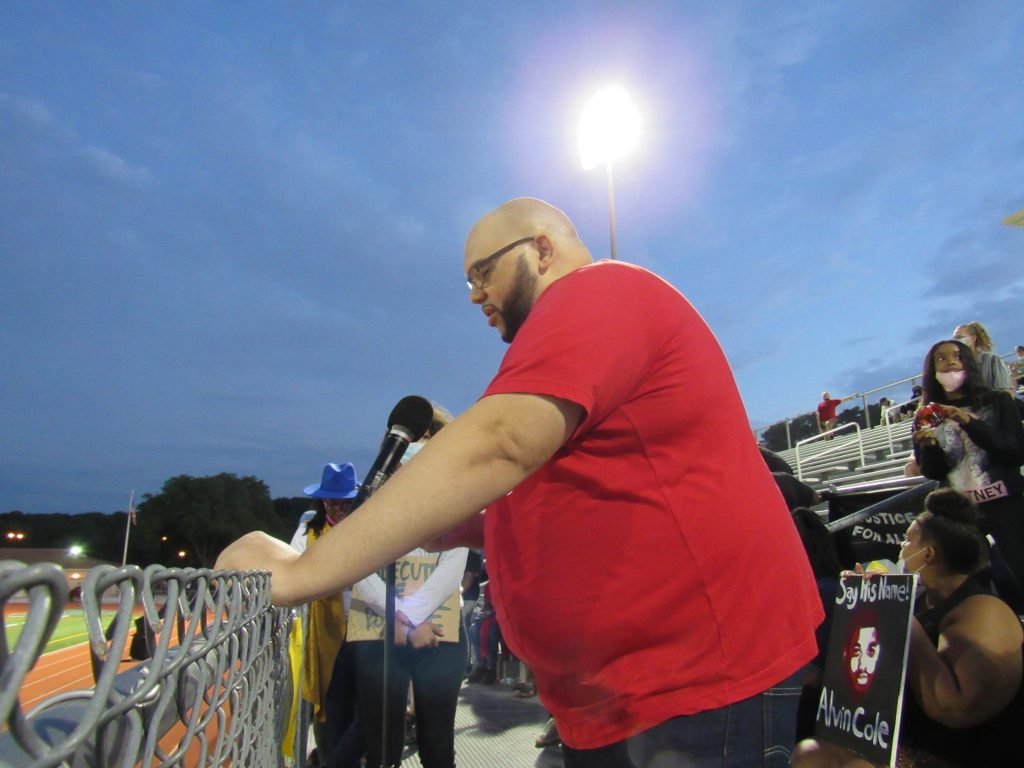 As chair of Wauwatosa’s Equity and Inclusion Commission (EIC), Sean Lowe feels it’s his duty to get into what the late Congressman John Lewis called “good trouble.”

The commission was formed in 2019, after a group of residents pushed the idea as part of the solution to the suburb’s checkered legacy with racial issues. Right now, one of the top items on the commission’s agenda is proposing reforms for the police department.

Over just a few short months, the Wauwatosa Police Department (WPD) has been put under an unprecedented level of scrutiny. Local activists and residents have been particularly focused on three separate fatal shootings involving a single officer, Joseph Mensah, over a five-year period. Protests and marches in the area, coupled with support from the social justice organization Roc Nation, have already achieved policy victories over this short period of time.

The first victory was a decision by city officials to implement a body camera program for all Tosa officers. Currently, the only officers who utilize body cameras are the few assigned to the department’s motorcycle patrol. Next came the Police and Fire Commission’s ruling to place Mensah on paid suspension, a decision which followed the Wauwatosa Common Council calling for the officer’s removal. Now, the Common Council has passed an ordinance recommended by the EIC to ban the use of choke holds among police.

“MAJOR victory tonight,” Lowe wrote on Facebook, after that council meeting. “I will take this as a win and keep pushing on!” Lowe tells Wisconsin Examiner that he hopes the EIC’s work can become a model for similar commissions in the state.

Lowe says overall his goals go well beyond the police department. It encompasses equity throughout the entire community. “Just making sure that it’s really a safe and equitable place for all,” he begins. “Reviewing our practices and making sure businesses in Wauwatosa also understand that they need to be on board when it comes to diversity and inclusion. And making sure that residents are treating all neighbors with respect regardless of their background, sexual orientation, religion or race. As we continue to educate the city employees, we also have to have a component to educate residents as well.”

Wauwatosa’s history of racial tensions has not been erased, despite the suburb gradually becoming more diverse in recent years. In 2020, Wauwatosa has an 86.43% white population, followed by 5.18% African Americans, 4.31% Asian Americans, 2.92% listed as two or more races and all other demographics totaling less than 1%. The average Tosa household makes $100,560 a year, with median rental costs at around $1,071 . Each of those figures stand in stark contrast to the City of Milwaukee, which directly borders Wauwatosa to the east.

These realities have not gone unnoticed by the relatively new administration of Mayor Dennis McBride. It’s the new mayor’s ambition to increase diversity not only in the police department, but throughout city leadership positions. Just recently, the Wauwatosa School District appointed its first Black high school principal.

While there may be similar shifts on the way, Lowe also remarks on the absence of people of color in positions of power within the suburb. “I have heard that they’ve never had a Black man in power like this in Wauwatosa,” says Lowe, “even though [the EIC] is a citizen-led Commission.”

Lowe feels that this dynamic has partly played into WPD Chief Barry Weber’s growing discontent about recent policy shifts impacting the department. On July 27, Weber sent a letter to Mayor McBride calling for Lowe to be “immediately” removed from his position as head of the commission because the EIC chair called for Mensah to be fired during a public listening session on race and equity held by the Common Council.

“His appearance at the Council meeting held at Hart Park on July 21, 2020 was abhorrent and demonstrated his own bias and racism toward our police department,” Weber wrote. “One of the comments Mr. Lowe stated was, ‘A better Wauwatosa includes a fired and convicted Joseph Mensah.’ I was under the apparently false assumption that due process is a guaranteed right by the United States Constitution. Not so with the Equity and Inclusion Commission.”

Weber’s letter continued, “I further request that the goals and purpose of the Commission be clarified to all members. Some of the sentiments that have been expressed to me by some, indicate that Mr. Lowe is not the only member who harbors negative feelings toward the police. If this commission is going to be worthwhile and have success in the future, some significant changes need to occur immediately.”

The citizen-led commission, however, on which Weber and the mayor are non-voting members, has already achieved successes in recommending and implementing policy changes,” Lowe points out Given that police are not a race, Lowe is unsure how his comments could’ve been racist toward WPD. Both Mensah and Lowe are Black men. Lowe was also not the only public official to speak during the meeting. Both Sen. Lena Taylor and Rep. LaKeshia Myers, whose legislative districts contain  parts of Tosa, also spoke. Weber, however, did not single out any other appointed or elected officials in his letter.

In the past, Weber has confronted the Common Council when city officials have tried to reign in the department. In 2018, when Ald. Heather Kuhl proposed a resolution to require a unanimous Common Council vote before WPD could work with immigration enforcement, Weber confidently pushed back. “You can pass a resolution, you can pass an ordinance, if I get someone who I think is guilty of a serious crime and they’re undocumented, I’m not following the ordinance. Which means that if I’m doing something illegally, somebody is going to have to file charges with the Police and Fire Commission and have me removed.”

Lowe notes that when the proposed choke hold ban passed the Government Affairs Committee, Weber expressed his disapproval. “He thinks the current language is sufficient for choke holds and I do not. I wanted a broader ban on it. But I think that he’s in a position of, ‘well my officers aren’t going to do it anyway so why call it out.’”

Lowe also feels that the police department’s formal diversity and inclusion training needs to be improved. “It’s clear and evident that that’s needed, when the police chief calls me racist. I don’t know how a Black man asking for another Black man to be fired is racist. So clearly, the chief needs to be the first one at that training.”

Weber has been chief of Tosa PD since the late 80’s, and has over 40 years of law enforcement experience. He took the position at WPD amidst an investigation into racist Martin Luther King Day parties being hosted by several officers and command staff, as well as flyers being distributed that advocated an open hunting season on Blacks.

Despite the chief’s letter to the mayor, the Equity and Inclusion Commission chair is unrepentant and unafraid of these growing debates around WPD. In the coming months, Lowe anticipates that other segments of Tosa city government will create their own initiatives to tackle systemic issues throughout the suburb.

“I think Mayor McBride is very aware of the history of the City of Wauwatosa when it comes to past racism and past practices,” says Lowe. “And I think he will work forward, along with Equity and Inclusion Commission, to help drive that change.”