Though some students are worried the shutdown has affected their prospects.

By Shamane Mills, Wisconsin Public Radio - Aug 3rd, 2020 11:46 am
Get a daily rundown of the top stories on Urban Milwaukee 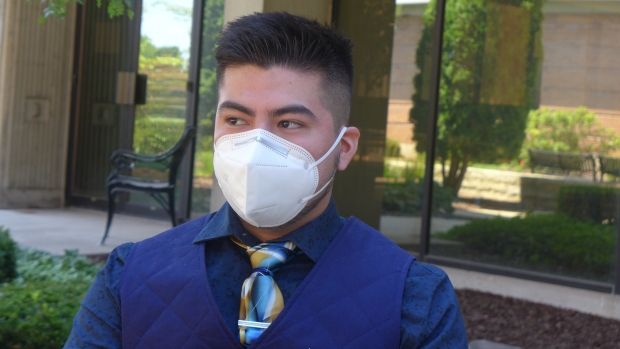 The coronavirus pandemic has made the process of applying to medical school more difficult as group exams were temporarily canceled around the country at the height of the pandemic. Juanadrian Lezama, 21, managed to take the medical college admissions test but others around the country are calling for it to be waived this year because of disruptions caused by the pandemic. Lezama wears a face mask in this July 24, 2020 photo as he interviewed on the campus of the Medical College of Wisconsin which does not allow visitors inside campus buildings to prevent spread of corornavirus. Shamane Mills/WPR.

The coronavirus pandemic has put a spotlight on doctors. Many have risked their own health to care for COVID-19 patients. Some have lost their lives. It’s a grim reality of the job, but it hasn’t stopped people from applying to medical school.

“There are enormous numbers of people who want to get into medical school,” Kerschner said. “Most of them aren’t daunted by many things, even a pandemic.”

But the pandemic has made an already difficult career to pursue, even harder. 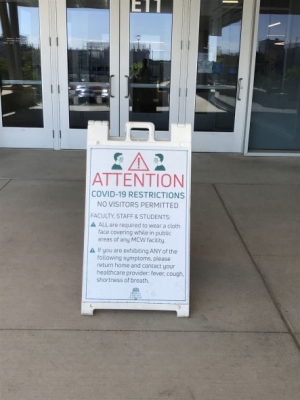 The coronavirus pandemic emptied many classrooms around the country this spring. At the Medical College of Wisconsin, students switched to virtual instruction and buildings on the campus remain closed to visitors. Shamane Mills/WPR.

Long before doctors use a stethoscope or wear a white coat, they have to get into medical school. The application process is long and complicated and acceptance rates are generally low. For good reason. Schools are choosy because someone’s life may depend on it. Moreover, Kerschner says, there aren’t enough residency spots around the country to train more medical school students.

But some who want to be physicians are having second thoughts. Not about the career goal itself, rather the timing. The country remains in the grip of a pandemic which earlier this year temporarily brought life to a near standstill. The deadly virus disrupted classes, volunteer work and other key activities that could make a pre-med student stand out in a sea of applications.

Students are worried their application won’t be good enough to get into medical school because they missed out on career building experiences that might give them an edge due to the pandemic.

That’s what Kerschner heard when hosting an online forum for a couple thousand pre-med students for the Association of American Medical Colleges. Kerschner chairs the board of directors for the national medical school group based in Washington D.C.

“I listened to their questions, answered their questions,” he said. “I heard concern in their voice, heard a lot of worries, heard them express difficulties at this time with the pandemic.”

So Kerschner decided to follow up on that virtual town hall with a written column directed at pre-med students.

“I felt compelled to write back to them essentially to tell them, ‘Look, we hear you, we understand this has been hard, but here’s all the reasons this is a great step for you to pursue,'” he said.

In the column, posted on the website of the Association of American Medical Colleges, Kerschner acknowledged pre-med students are facing challenges unlike any in the history of medicine during the COVID-19 pandemic.

Juanadrian Lezama, 21, knows this all too well. He intended to take the Medical College Admission Test, or MCAT, in spring. But that was at the height of the pandemic and officials didn’t want hundreds of students packed into the same room spreading germs. Testing was temporarily called off, throwing the plans of Lezama and thousands of others across the country out the window.

“As this progressed, everything got canceled,” he said. “The end of April is what I wanted to shoot for. Not only was it full, but the beginning dates for April were canceled, so of course anything that followed that was all full. The earliest (test) I could take was in June.”

Two days before taking the all-important test, which would determine whether he’d be accepted into medical school, Lezama’s grandfather died from COVID-19. The Milwaukee native was devastated, but determined. His grandfather had encouraged his dream of someday becoming a doctor.

“I need to do this for him,” Lezama said. “He believed in me trying to pursue this career.”

One of the reasons Lezama wants to work in medicine is to provide better care for people of color. The current COVID-19 crisis has affected Black and Latino people the most, and his grandfather’s death brought those sad statistics home.

Lezama expected to be excited or nervous for the big test. But the family tragedy made it difficult to concentrate on what he’d studied and planned for since high school.

“I felt indifferent to the exam,” he said. “It felt monotonous, so I was like, ‘I don’t think I did that well.'”

Turns out he underestimated himself. Lezama said he scored in the 75th percentile.

There have been calls by students across the nation to waive the MCAT during the pandemic. The AAMC says most medical schools are still using it to determine which students to admit, but are being flexible about reviewing applications that do not yet include test scores. According to a recent survey of AAMC-member institutions, nearly 70 percent of responding schools have adjusted their application deadlines for 2021 admissions, or are considering adjusting them.

Lezama has applied to three medical schools around the country, including the Medical College of Wisconsin. He’s gotten a taste of what it might be like to work in medicine by volunteering at a free healthcare clinic in Milwaukee for the uninsured. The weekend clinic is held at the Ascension Columbia St. Mary’s Family Health Center and is staffed by students from the Medical College of Wisconsin.

“Sometimes we get patients that can’t communicate that well in English,” he said. “There was one that’s native language was Spanish, right? And I was able to help with that because I was working there that time. When I was able to translate what they were saying to him, it seemed he was more at ease.”

While caring and compassion may be a universal language, there are still communication and other barriers doctors hope to tackle. That’s why Lezama says he won’t let the obstacles of the pandemic get in the way of pursuing his dream.