'What have we come to, not in Green Bay, no one should be threatened.'

By Megan Hart, Wisconsin Public Radio - Jul 27th, 2020 10:41 am
Get a daily rundown of the top stories on Urban Milwaukee 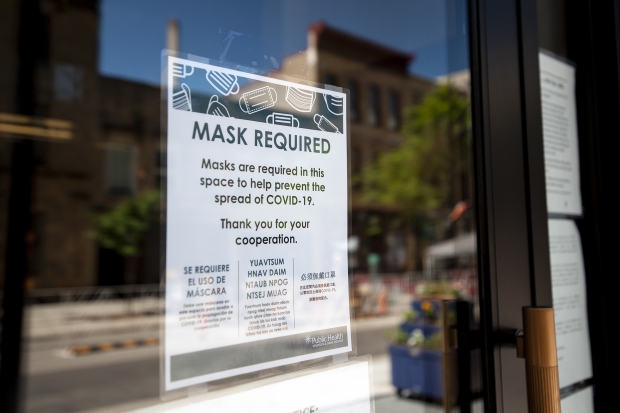 A sign hangs on the door of a business in downtown Madison on Wednesday, July 22, 2020. Angela Major/WPR.

More than a dozen officials in the city of Green Bay have received threats after its City Council passed a mask ordinance last week.

Beginning Monday, face coverings will be required for anyone over the age of 5 in indoor, public spaces. The Green Bay City Council voted 7-5 in favor of the mandate on Tuesday.

Council member Barbara Dorff did a lot of research before voting in support of the ordinance, she said. She believes wearing masks can help slow the spread of the coronavirus before school starts this fall.

Dorff, who worked as an educator for 38 years, is in her fifth year as a city council member. She’s seen contentious issues before, she said, and is used to getting called names.

But she’s never experienced anything like this, she said.

“When they start threatening your family, which is what happened, it’s even hard to describe how horrible that feels,” Dorff said.

Police are working to address the threats, Dorff said. In the meantime, people on both sides of the mask debate have reached out to offer their support, she said.

“Even people that were opposed to the mask ordinance are rallying on Facebook and saying, ‘What have we come to, not in Green Bay, no one should be threatened,'” she said.

Last week’s City Council meeting lasted more than two-and-a-half hours, with many residents weighing in on the ordinance. Overall, Dorff said she received more feedback in favor of the mandate than against it. Since it passed, she’s received more messages of thanks than threats, she said.

Dorff thinks maybe the pressures of life amid the coronavirus pandemic contributed to the extreme response from some residents.

“People are stressed about their job and their family and their health, so maybe this masking becomes a flash point and that’s why some people are way overreacting, because they feel so out of control over so much in their life,” she said.

Smith and Genrich both posted videos on social media Friday asking residents and visitors to voluntarily comply with the ordinance while in Green Bay. Mask violations will be “low-priority” calls, but violators could be fined up to $73.60 or even arrested for trespassing, Smith said.

On Thursday, Brown County’s Human Services Committee voted to draft several versions of a similar ordinance that could go to its Board of Supervisors for a vote next month to establish a county-wide mandate.

Several communities across Wisconsin, including Dane County and the cities of Milwaukee, Racine and Superior, also have mask ordinances in place.

Op Ed: The Republican ‘Do Nothing’ Strategy by State Sen. Jeff Smith

The State of Politics: Rebecca Kleefisch Will Run for Governor by Steven Walters

Lessons From the 1918 Influenza Plague by Jake Zuckerman

Colectivo workers deserve a platform to have their voices heard by Ald. Khalif Rainey