By Bridget Fogarty, Milwaukee Neighborhood News Service - Jul 25th, 2020 09:51 am
Get a daily rundown of the top stories on Urban Milwaukee 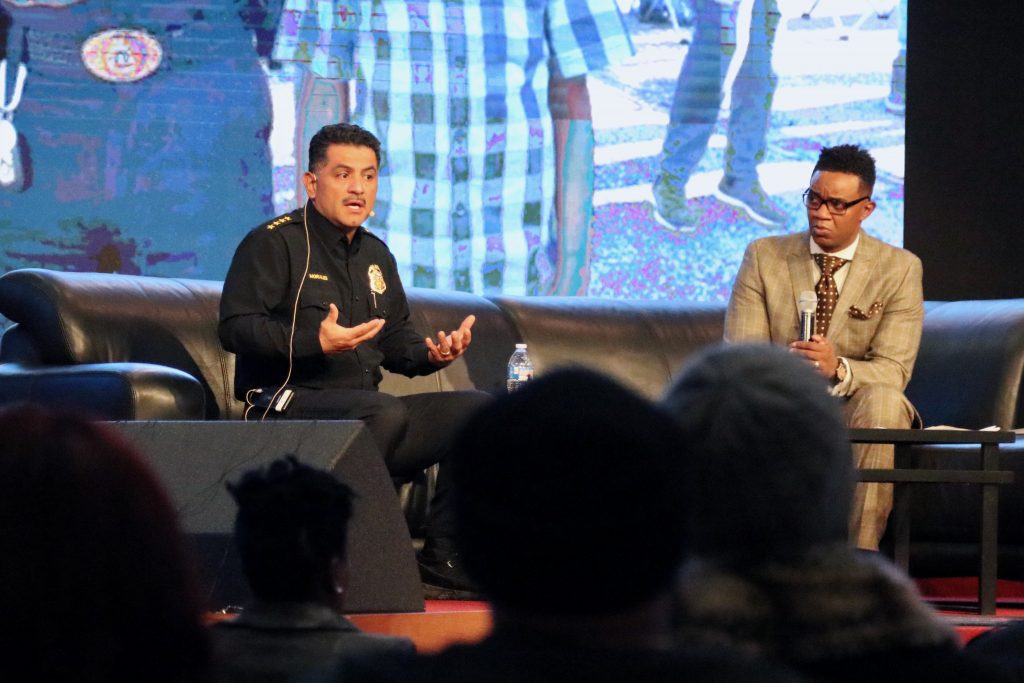 The Fire and Police Commission ordered Milwaukee Police Chief Alfonso Morales, shown during a community listening session in January, to create a community-oriented policing plan with the Community Collaborative Commission, other community leaders and the Milwaukee Common Council. Photo by Sam Woods/NNS.

After years of debate, Milwaukee police and residents continue to weigh what community-oriented policing should look like in the city.

And so far, they remain on different pages.

On one side, the Community Collaborative Commission, or CCC, continues its push for developing standards for community-oriented policing as defined by nationwide reports of the best practices.

On the other is the MPD, which the CCC accuses of not collaborating in good faith – a charge the MPD denies.

CCC chairman Fred Royal of the Milwaukee branch of the NAACP said this week that the MPD continues to offer a “piecemeal approach to what really needs to occur.”

“They’ve done this in a silo by themselves, without consideration of the community,” he said.

But MPD spokeswoman Sgt. Sheronda Grant said the department wants to work with the CCC. In an email to NNS on Thursday, she said: “We look forward to hearing back from each member regarding their recommendations.”

At issue is a draft report the MPD sent Wednesday to members of the CCC on community policing.

That report came on the heels of Monday’s meeting of the Fire and Police Commission, which ordered the MPD to draft a community-oriented policing plan with the CCC, other community leaders and the Milwaukee Common Council. It was one of 11 directives the commission issued to Police Chief Alfonso Morales.

The drafted document is riddled with shortcomings that are contrary to the definition of true community-oriented policing, Royal said.

And that’s what rankles Royal.

(The police department has requested the group’s feedback by Friday.)

Origins of the CCC

The seeds of the CCC were planted in late 2015 after former Police Chief Edward Flynn requested the U.S. Department of Justice do a voluntary review of the MPD, a decision sparked when a Milwaukee police officer shot and killed Dontre Hamilton in 2014.

In 2016, the Department of Justice released an incomplete report to MPD, the Milwaukee Common Council and the FPC with their 56 findings and 110 recommendations on building trust between MPD and the community. That same summer, unrest in Sherman Park erupted in response to the killing of Sylville Smith by a Milwaukee police officer.

The report was leaked and published by the Journal Sentinel in August 2017. Community leaders saw the unfinished work as an opportunity to find out what Milwaukee neighbors felt could be solutions to better police and community relations.

Led by the African American Roundtable, a coalition that seeks to improve the quality of life for Black communities, local groups informally organized to take on the task of finishing the DOJ’s report through community-engaged input.

Former Common Council President Ashanti Hamilton led the council and the mayor to formally establish the CCC in 2017.

That action from the city supported, validated and formalized the work of those organizations and opened the door to critical conversations, said Jeff Roman, a researcher with Derute Consulting Cooperative who conducted analysis of community responses to the DOJ’s findings.

“This was the first time the leadership of the Common Council really entrusted a process and put it in the hands of the community,” said Roman. (Roman was the former project manager for News414, a service journalism collaboration between NNS and two other nonprofit newsrooms, Wisconsin Watch and Outlier Media.).

The report and recommendations

Over the course of six months, 18 community organizations hosted 45 community conversations through “Community Hubs,” including three sponsored by the Milwaukee Police Department. The FPC created an online community feedback portal as another outlet to gather perspectives.

Royal said the conversations with community members and law enforcement were wide and deliberate, and the ultimate conclusions were similar.

“People want to have a comfortable quality of life,” he said.

Based off the findings, the CCC recommended the MPD fully embrace community-oriented policing, starting with looking at national processes and replicating them in Milwaukee.

President Obama’s Taskforce On 21st Century Policing 2015 report and the more recent The New Era on Public Safety 2019 report are two guiding documents nationwide on how to institute community-oriented policing. They call on lawmakers and police departments to adapt and implement best practices to ensure fair, safe and effective policing.

True commitment to community-oriented policing can be cultivated by following these reports and their recommendations, Royal said.

From committee to commission

This month, the Common Council’s Policy and Standards Committee’s approved a resolution that allows the CCC to start their strategic planning process on community-oriented policing as an official Commission. Their first meeting is July 29.

Safe and Sound youth program manager Damien Smith is one of them.

In his job, he works closely with young people and police officers, and said he can provide unique perspectives from the two populations.

You can read the CCC report in its entirety here.