Why Evers Must Take Action

Data shows state is losing the battle against COVID-19. He must reissue an emergency order.

The New York Times recently published an analysis of why the United States, alone among rich nations, failed to control COVID-19. According to the Times, a small group that met every morning determined the Trump administration’s policies regarding the pandemic. This group was led by Mark Meadows, Trump’s chief of staff. Dr. Deborah Birx was the committee’ only the only member with a public health background.

This group, rather than the official White House coronavirus task force, was the decision-maker, the Times reports. Its goal was to pass off responsibility for the pandemic to the states.

Dr. Birx believed that the US was on the same trajectory as Italy, which early on had huge spikes in cases and deaths, which then declined to close to zero, shown by the green line in the chart below. The data are from the World Health Organization. 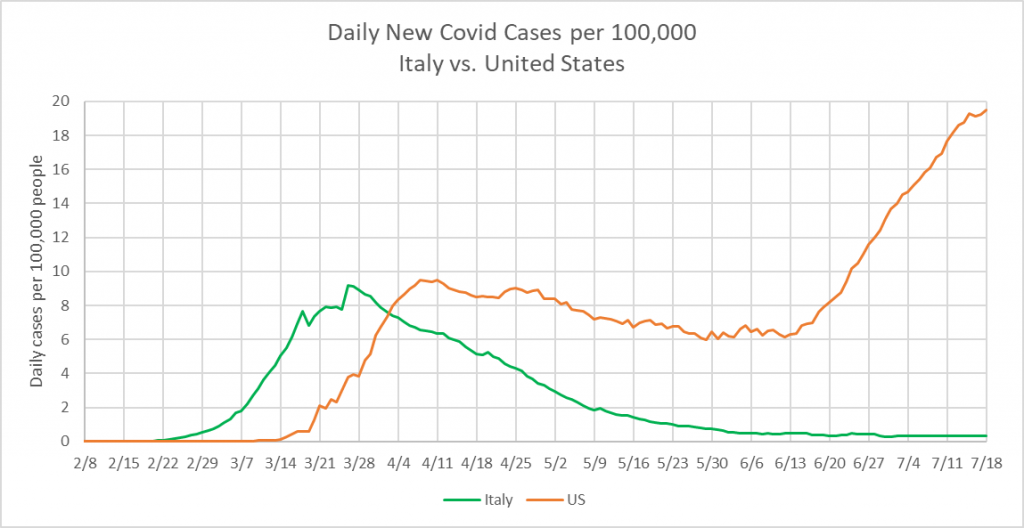 The orange line shows new cases per day for every 100,000 Americans. Converting the raw number of cases into a rate per 100,000 people allows one to compare nations and states with varying populations.

As the chart shows, the line for the United States does track Italy with a three-week delay until early April. Between April and mid-June, new US cases continued declining but much more gradually than Italy. The slow decline was largely driven by the recovery of northeastern states like New York and New Jersey that had been badly hit early in the pandemic. This decline was partially offset by a gradual increase in COVID-19 in many other states particularly in the South and West. 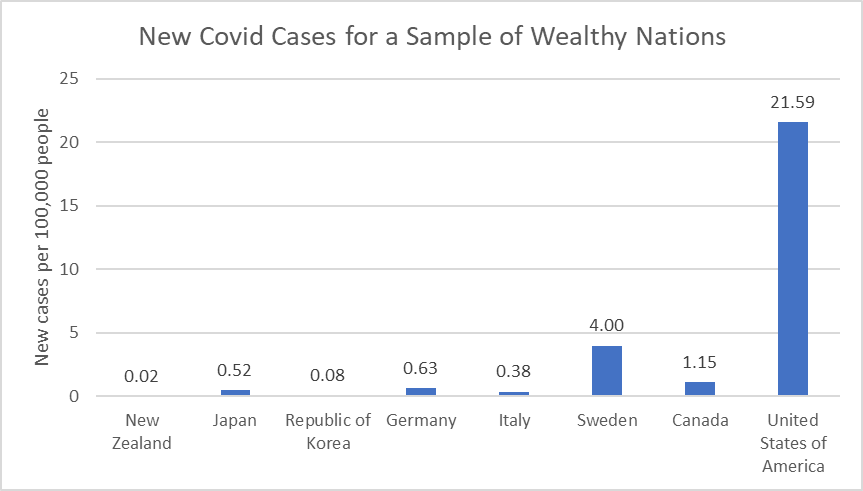 New COVID-19 Cases for a Sample of Wealthy Nations

Starting in early June, several states, mostly in the South and West and mostly under Republican governors, eliminated most of their restrictions. Not surprisingly, this allowed the coronavirus to infect more people. The graph below shows the results in three states, Florida, Texas, and Arizona. Note that the rate of new cases in these states is around 50 or 100 times those in other wealthy nations. 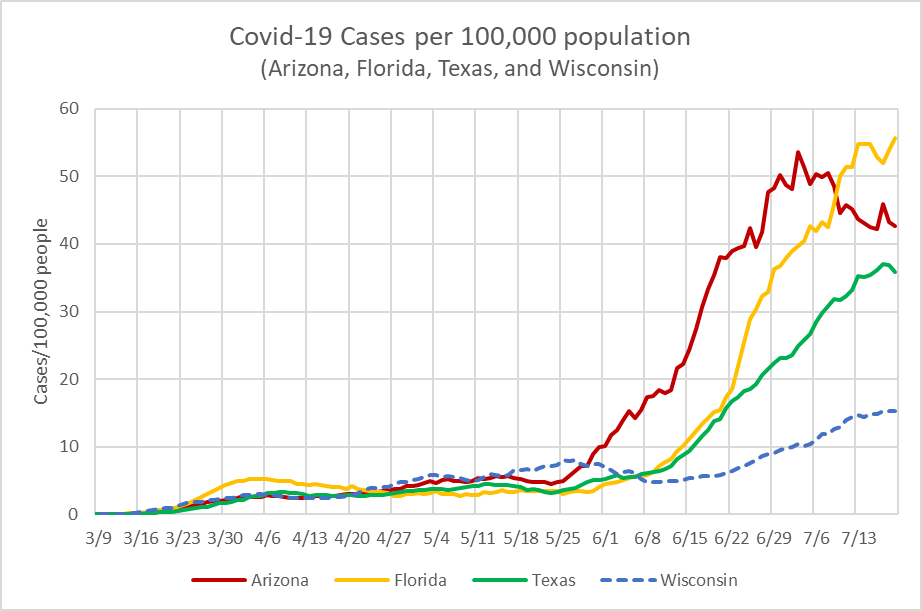 The governors weren’t alone in their enthusiasm for opening whether ready or not. For example, the May 1 edition of the Houston Chronicle reported that “Gov. Greg Abbott moved Friday to open up parts of the Texas economy, but he continues to get pressure from many Republicans to move faster even as Democrats have warned him to slow down.”

Wisconsin is the only state whose Supreme Court has taken away from its governor the power to manage the pandemic. The next graph shows what happened next. Following the court’s decision, new cases increased briefly (in part, perhaps, because of more testing), followed by a two-week decline. To some this suggested that Wisconsin would do fine without the restrictions in the governor’s order. 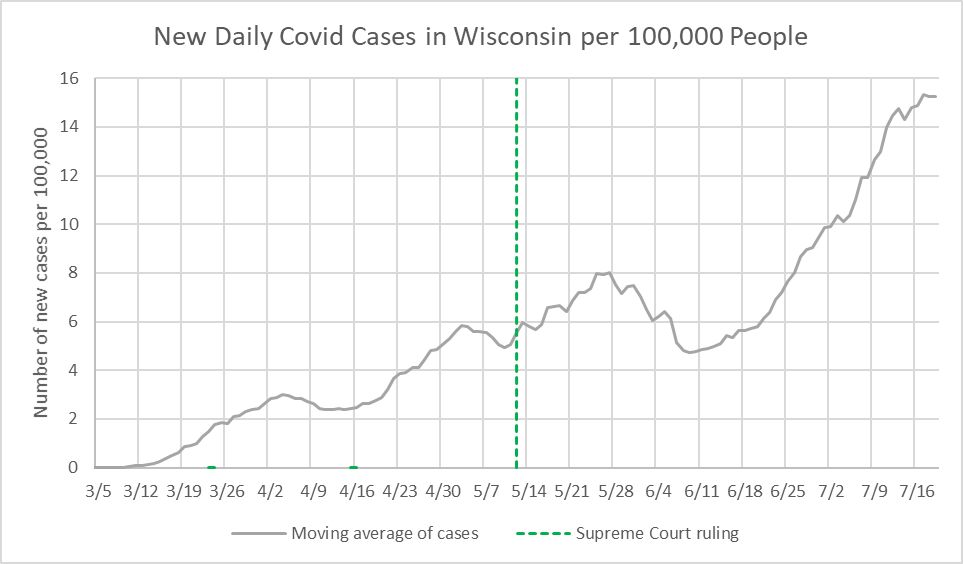 However, since early June, cases have been rising. Several indicators suggest that this increase in infections is real, not due to increased testing, including the fact that the percentage of tests that are positive has grown from 2 percent to almost 8 percent even as the amount of testing hasn’t grown, and that hospitalizations have started to grow.

The only counter indicator is deaths, which have not grown–yet. This may reflect the time lapse between the onset of symptoms and deaths, the shift to a younger population of patients (reflecting a combination of self-isolating among older people and those with health conditions, along with over-confidence among the young), and greater patient survival as the medical community gains experience with what works. It should be noted that deaths have increased in the three states shown above—Florida, Arizona, and Texas—so there is every reason to expect increased deaths in Wisconsin as well.

While Wisconsin’s daily COVID-19 cases of around 15 per 100,000 residents is certainly better than the US average of almost 22, much less Florida’s 55, it is still too high. If a Wisconsinite travels to New York, New Jersey, or Connecticut, or a resident of one of those states returns home from Wisconsin, that traveler is required to spend 14 days in quarantine (this requirement applies to states with over 10 cases per 100,000 people). Likewise, Wisconsin is poised to trigger a similar requirement from Chicago (based on states with over 15 cases per 100,000 residents). More seriously, the spike in cases here raises the risks for everyone in Wisconsin, but particularly for employees and customers of businesses (such as dentists and hair dressers) who have no choice and must work in direct contact with customers.

In most of the states with exploding COVID-19 cases, it is easy to identify the person at fault if things go wrong—the state’s governor. In Wisconsin the state Supreme Court’s April 16 decision declaring  Emergency Order 28: Safer at Home “unlawful, invalid, and unenforceable” left no one in charge. In her strange decision, Justice Pat Roggensack tried to toss the ball to the Legislature and executive:

I trust that the parties will place the interests of the people of Wisconsin first and work together in good faith to quickly establish a rule that best addresses COVID-19 and its devastating effects on Wisconsin.

The refusal of the legislative leaders—Robin Vos and Scott Fitzgerald–to work with Gov. Tony Evers left Wisconsin in a leadership vacuum. Rather than gaining control over the virus, Wisconsin has seen its daily COVID-19 cases more than double since the court’s decision.

If the leadership vacuum continues, and in the absence of an effective and safe vaccination, we can expect the coronavirus will continue its spread. More Wisconsinites will become sick, more will die, the economy will continue limping along, and reopening schools will be considered by many as too dangerous for students, teachers, and the community at large.

It is imperative, therefore, that Gov. Evers take a lead in fighting the pandemic by issuing a new order that shuts down activities that are known to spread. Of course, it should be updated to reflect the latest research and experience. For example, requiring face masks has become front and center in strategies to minimize virus spread; yet their only mention in the original Emergency Order 28 was part of a section allowing arts and crafts stores to open for selling materials to make masks.

Will such an order by Evers be met with a repeat court challenge? Perhaps Vos and Fitzgerald will look at the outcome of their last court victory and reconsider whether they want to go to court. If that doesn’t happen, perhaps the defeat of one of the two most ideology-driven justices, Dan Kelly, by Jill Karofsky will lead to a court that is more open to evidence rather than ideology and partisanship.

Karofsky begins her tenure on the Wisconsin Supreme Court on  August 1. Evers should be ready to issue a new emergency order by the day before this. Given the stakes — the worrisome increase in COVID-19 cases — for all people in Wisconsin, the governor must take action.