Why Wisconsin, U.S. Failed Against COVID-19

COVID-19 continues to surge in the United States, as the chart below shows. The bars show the number of new cases reported each day, based on data compiled by the New York Times. The dotted line shows the 7-day moving averages of new cases. 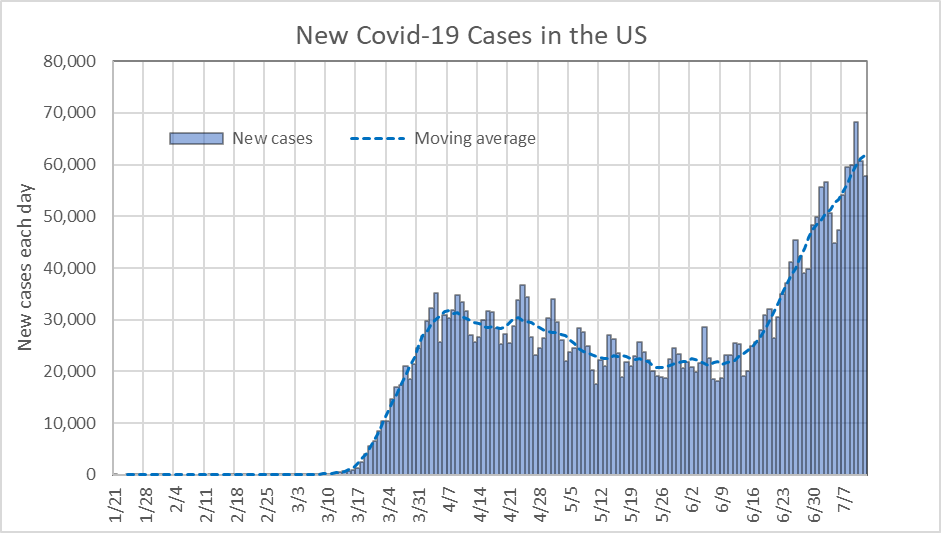 The first case of COVID-19 in the U.S. was reported on January 21. Over the next month, a total of 30 new cases were reported, an average of one a day. But then exponential growth kicked in. By March 21 new cases were appearing at the rate of 6,500 a day and increasing at the rate of 2,000 per day. Unfortunately, the United States government wasted the weeks between January 21 and early March and was caught without sufficient supplies of all types.

Other advanced countries have been much more successful in controlling the spread of the virus. When adjusted for population size, the daily number of new American cases is about 18.6 per 100,000 population, by far the highest of any advanced country. The equivalent number for Canada is 0.58. The United Kingdom’s current rate is around .8 new cases per 100,000, the highest in Europe. New Zealand reports a rate of 0.02.

The first peak in the above chart of US cases is mainly due to the explosion of cases in populous northeast states like New York and New Jersey. The current rapid growth in cases, on the other hand, is mainly concentrated in Southern and Western states. This can be seen in the next chart, which shows the daily new cases per 100,000 people in “red states” and “blue states.” Red states are those, including Wisconsin, that were won by Donald Trump in the 2016 presidential election. The District of Columbia is included among the blue states. 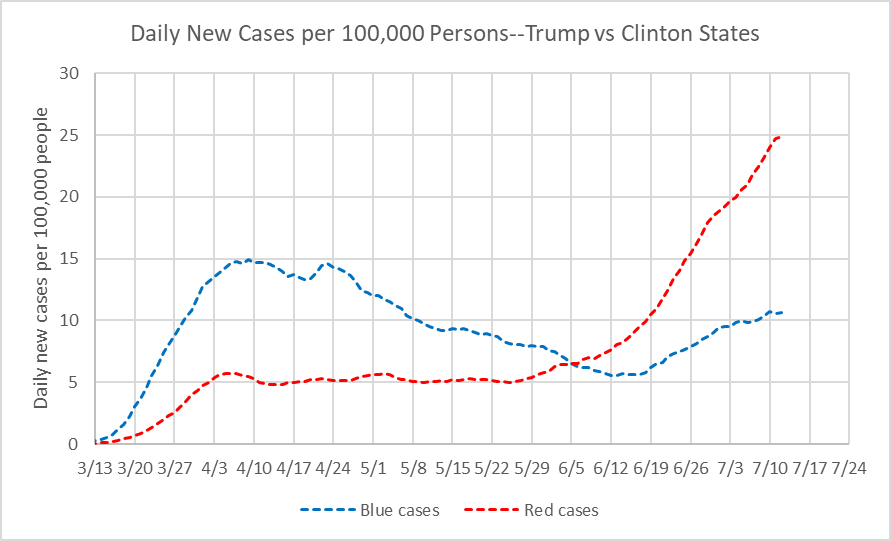 While the blue states as a group are adding cases at a far lower rate than the red states, both groups are failing by international standards.

The problem, I think, was the apparent decision by President Trump and those who follow him to politicize the pandemic and to prioritize reopening the economy over controlling the disease. This was shown early on by his repeated claims that the disease would just “disappear.” Logically, then, there was little need to prepare for a disappearing disease.

After briefly acknowledging that a lockdown was needed, Trump turned back to promising that churches could reopen by Easter. There followed a series of protests against the lockdowns in several states, including Michigan, North Carolina and Wisconsin.

A New York Times article on April 21 described Trump allies fighting the lockdowns under the title, The Quiet Hand of Conservative Groups in the Anti-Lockdown Protests. Among the groups mentioned in this article are FreedomWorks, Tea Party Patriots, and the American Legislative Exchange Council (ALEC).

One of the players mentioned is Stephen Moore, a coauthor of ALEC’s annual “Rich State Poor State” report that rates states for “business-friendliness” and whom the Trump administration once considered for a top post at the Federal Reserve. According to the article, he

was communicating with a group of local activists in Wisconsin involved in organizing a protest at the State Capitol set for Friday. On a conservative YouTube program … , Mr. Moore said he had “one big donor in Wisconsin” who had pledged financial support for the protesters, telling him, ‘Steve, I promise, I will pay the bail and legal fees of anyone who gets arrested.”

The following day, the Washington Post published an article under the title: The anti-quarantine protests seem spontaneous. But behind the scenes, a powerful network is helping.

The article described a series of Facebook ads that sounded “populist and passionate”:

The posts, funded by an initiative called Convention of States, were not the product of a grass-roots uprising alone. Instead, they represented one salvo in a wide-ranging and well-financed conservative campaign to undermine restrictions that medical experts say are necessary to contain the coronavirus …

The Convention of States project launched in 2015 with a high-dollar donation from the family foundation of Robert Mercer, a billionaire hedge fund manager and Republican patron.

The article mentioned a pair of Wisconsin connections:

In recent days, conservatives have set their sights on Wisconsin, where a few dozen protesters turned out at the Capitol to air their frustrations with Gov. Tony Evers, a Democrat, after he extended his state’s stay-at-home order until late May.

More recently, demands for reopening seem to have morphed into opposition to the use of masks. This seems odd because, if anything, widespread use of masks would likely make some reopenings more feasible by reducing the probability that a person with COVID-19 before symptoms appear will infect others. (Here are some discussions of masks from the Mayo Clinic, Las Vegas Sun, Health Affairs study, Examine.com, and Masks for all).

Was the United States ready to be reopened? Before getting to the individual states, let’s take a look at the United States as a whole. One common standard for reopening is that the number of cases has made a statistically significant decline over a two-week period. As is clear from the first graph in this column, American cases are far from declining and have increased since the beginning of June.

The US as a whole also fails a second standard: that the number of new cases per day should be sufficiently small, generally defined as be 4 per 100,000 population. Instead, as mentioned earlier, the United States currently has over 16 new cases per 100,000. Note that this standard is doable, as demonstrated by Canada, European countries, and advanced nations on the Pacific Rim.

What about the red and blue states shown in the second chart? It is clear that many of the blue states, having been hard hit early in the pandemic, are doing a better job of keeping the virus in check than the average red state. However, better is not good enough. The blue state cases are rising from a base—10 per 100,000 people—which is already too large.

What, then, about Wisconsin? The chart below shows the number of new COVID-19 cases each day in Wisconsin. Since the Wisconsin Supreme Court ruled against the governor, the daily numbers have more than doubled. 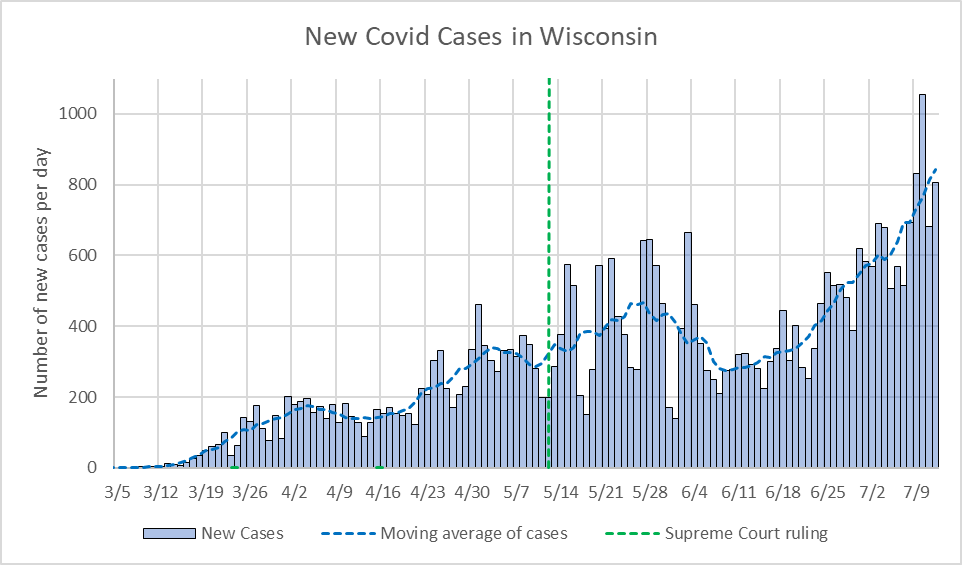 Although some of this increase in reported cases may reflect increased testing in the weeks following the court’s decision, since early June testing has drifted down, as shown in the graph below, based on data from the Covid Tracking Project. Thus, the reported gain starting in June is real, not an artifact of increased testing. 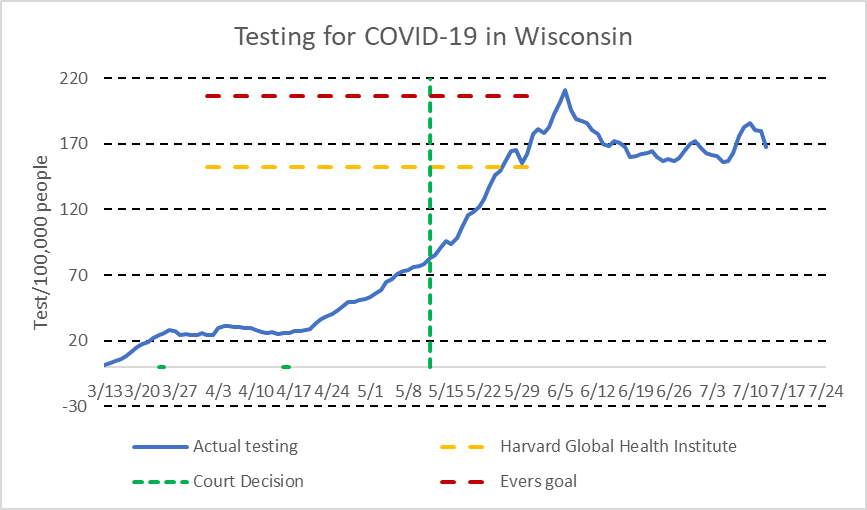 Testing for COVID-19 in Wisconsin.

This conclusion is supported by the next chart showing that percentage of positive tests has been increasing in recent weeks. If a higher proportion of the tests find COVID-19, the logical conclusion is that more COVID-19 is out there. This also means Wisconsin fails a third standard, that the percentage of positive tests should be under 5 percent. 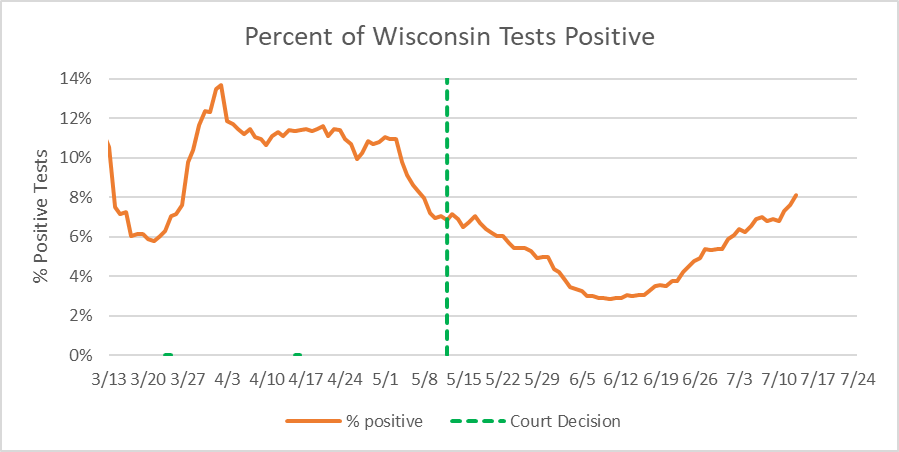 If present trends continue, and in the absence of a vaccination or effective leadership, the future of Wisconsin and much of the United States is bleak. Next week, I plan to explore the forms that leadership might take.