State sets new case record for fourth time in past week and a 30-day hospitalization high.

The number of new COVID-19 cases in Wisconsin keeps accelerating.

According to data released Tuesday afternoon by the Department of Health Services, Wisconsin set another 24-hour COVID-19 case record with 964 new cases of the disease.

It’s the fourth time in the last seven days that the state has set a new single-day high.

“These numbers are not the result of more testing,” said DHS Secretary-designee Andrea Palm during a press briefing. And that’s largely been true as the percentage of tests that confirm a new case (the positive case rate) has steadily increased over the past month even as testing has fluctuated. But the results Tuesday come as the state reported a 30-day high in testing with 14,680 processed tests.

An average of 11,076 tests per day have been processed in the past week.

But the state is still short of its 85,000 tests per week goal set as part of the Badger Bounce Back plan. “We certainly have seen increased demand as we have a surge in cases,” said Palm. Wisconsin labs have processed an average of 10,207 tests per day in the past two weeks versus 9,255 in the two weeks prior.

The state has the capacity to process almost twice as many tests as the benchmark seeks. The 83 labs across the state with equipment to process tests have a daily capacity of 24,362, over 170,000 per week, according to DHS.

Lagging indicators of the disease’s spread, hospitalizations and deaths, both ticked upward on Tuesday.

A total of 293 people are actively hospitalized with the disease according to the Wisconsin Hospital Association. It’s the highest total reported in 30 days, but is still lower than any of the 30 days prior. A total of 42 people were newly hospitalized in the past 24 hours, above the 30-day average of 28.

DHS reported six deaths from the disease on Tuesday, the first in three days. The statewide total now stands at 826 with a daily average of 4.47 in the past 30 days.

“The link between social interaction and disease interaction, particularly indoors, gets stronger and stronger,” said Dr. Ryan Westergaard, Chief Medical Officer of the DHS’ Bureau of Communicable Diseases, of what the state has learned in the past week. “The evidence continues to get stronger.”

“We need to do the things that are necessary to reflatten the curve and prevent ourselves from getting to the point where our hospitals and frontline workers are unable to meet the demand,” said Palm.

What are those things? State health officials asked for individuals to stay home when possible, wear masks when in public and practice physical distancing.

“We know that gatherings as simple as barbecues and bars can and have spread COVID-19,” said Palm.

The largest single source of the spread identified by contact tracing continues to be “mass gatherings” which includes parties and going to bars.

A total of 37,906 people have tested positive for the disease since the outbreak began with 15,148 in the past 30 days and 5,350 in the past week.  DHS reports that 78 percent of individuals with a confirmed case have “recovered,” as defined by a documented abatement of symptoms or a diagnosis over 30 days ago. The percent fell from a high of 79 as a surge in new cases has been reported.

Westergaard said the state is tracking unusual health conditions, including blood clotting issues, that occur in individuals with the disease.

“There have been some peculiar things we have learned that can correspond with COVID-19 that are sort of unusual compared to other respiratory viruses,” he said. But Westergaard said it’s too early to understand any potential long-term health impacts and that those with complications represent a minority of cases.

The death rate from the disease in Wisconsin stands at approximately two percent, down from three percent earlier in the outbreak when the majority of cases were not in individuals under the age of 40.

There are currently 962 ventilators and 368 intensive care unit (ICU) beds available across the state according to the Wisconsin Hospital Association. Since the data became publicly available on April 10th, WHA has reported an average of 94 ventilators and 389 ICU beds as available. 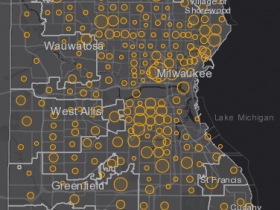 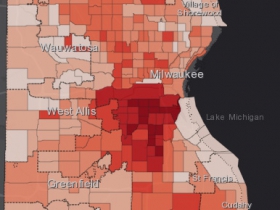 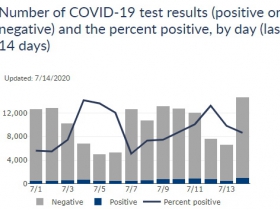 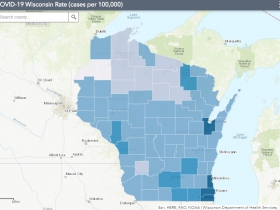 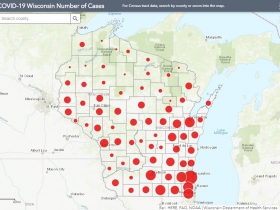 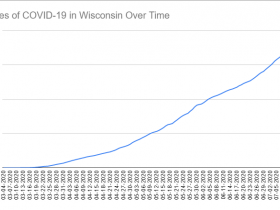 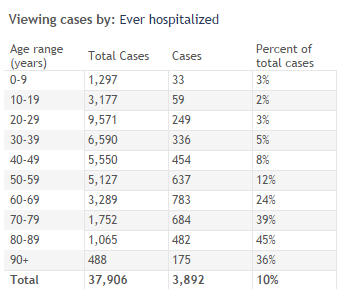