Just a few months ago, employers across Wisconsin and the nation were complaining about widespread shortages of people to do the jobs they were offering.

Today, that’s been turned on its head: with unemployment at 12%, driven by the COVID-19 pandemic, a jobs shortage has taken the place of the labor shortage that was the top concern of manufacturers and other industries.

The jobs shortage is especially obvious in the current recession, but Milwaukee policy analyst David Riemer says it has actually been with us more often than not for decades. Only the pandemic, and the dramatic nature of the current gap between those looking for work and the work that is available, has made it as visible as it is now.

Riemer has been examining jobs and employment data for decades, advising government officials including former Milwaukee Mayor John Norquist, former governors Tommy Thompson and Jim Doyle, and former President Bill Clinton. As far back as the 1990s, he has compared data on job openings with statistics on unemployment, finding a persistent mismatch between the two.

Job shortages, he’s found, have been a feature of the American economy for decades, although they are  rarely discussed.

“Even in normal times, good times — except when the market is superhot — there have been more unemployed people, even when narrowly defined, than there have been job openings,” Riemer says.

Only since December 2000 has the federal government systematically tracked data on job openings, as reported by employers. In the last two decades, even as unemployment fell during economic expansions in the first half of the 2000s and again in the years following the 2008 Great Recession, the number of people unemployed and looking for work has always exceeded the number of job vacancies that employers were reporting. 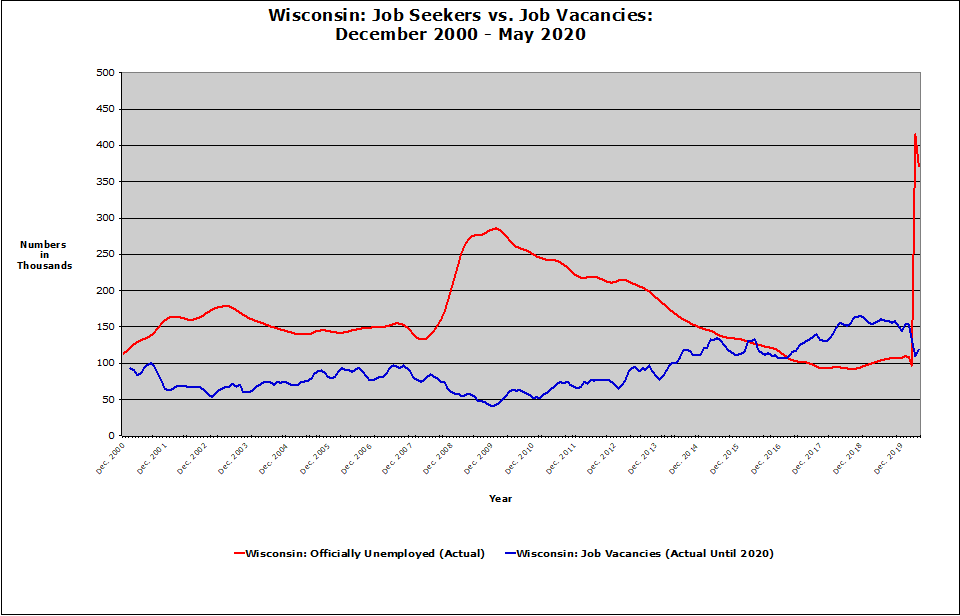 This chart showing the gap between job openings and people seeking jobs in Wisconsin since December 2000 was created by David Riemer, using data from the Bureau of Labor Statistics. Courtesy of David Riemer/Wisconsin Examiner.

That’s true nationally and in Wisconsin, says Riemer, who has put together charts based on data from the Bureau of Labor Statistics (BLS) to demonstrate his point. It’s true with the most restrictive definition of unemployment — such as the one used in BLS monthly household surveys that ask people whether they have looked for work in the previous four weeks. The gap is even more  dramatic when people who want work but have given up looking after repeated rejection, or part-time workers who want full-time jobs, are included among  job seekers.

Even with persistent jobs shortages, labor shortages are still real. “On the whole there are typically more people who want work than there are job openings,” he says. “The data also tell us that some job openings are really hard to fill.”

Those jobs may require hard-to-find skills or advanced education, require background checks that many people can’t pass, or pose other barriers. Jobseekers who would otherwise be interested might lack transportation or available child care, for example. “Also,” Riemer adds, “because some employers are really picky.”

Only in the last few years, as the economic expansion that began when Barack Obama was president stretched on after he left office, has the gap shrunk to the point where there were more job openings than there were people looking for work.

But with the pandemic, that’s gone. In Wisconsin, the number  of people looking for work in May was three times the number of projected openings, according to data Riemer has compiled. 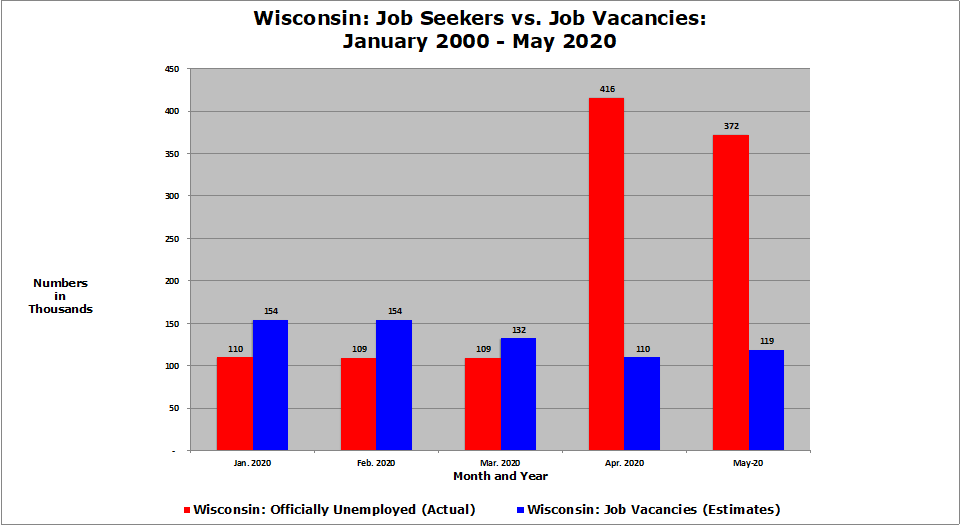 This chart comparing projected job openings and the number of people seeking jobs in Wisconsin in 2020 was created by David Riemer, using data from the Bureau of Labor Statistics. BLS data on job vacancies in the states are not reported every month, so for 2020, the number of job vacancies in Wisconsin for each month is a projection based on the last available data. Courtesy of David Riemer/Wisconsin Examiner.

“Most of the time there are more people looking for jobs than there are vacancies,” Riemer says. “At times there’s a significant gap. And during a crisis like this one, there’s a huge gap.”

The persistence of job shortages even in good times is, for Riemer, an argument for one of his longtime policy proposals to help bring more people into the labor force: a transitional jobs program. The bad times brought by COVID-19 makes such a program even more important, he says.

The federal government, he says, could — and should — support federally funded jobs at livable wages for people unable to find work in the private sector.

Transitional jobs are part of the “New Deal 3.0” that Riemer advocated for in a book he published last fall, and part of the “21st Century  New Deal” that descendants of aides to President Franklin Delano Roosevelt — who implemented the original New Deal — promoted in an open letter last month to former Vice President Joe Biden, the presumptive 2020 Democratic presidential nominee. Riemer assisted the open letter project.

A permanent transitional jobs program is also part of the Jobs for Economic Recovery Act of 2020, legislation introduced last month by Sen. Tammy Baldwin (D-Wis.) and four of her Democratic colleagues in the Senate. Her bill has won the  endorsement of the Community Advocates Public Policy Institute, with which Riemer is affiliated and which has supported the creation of transitional jobs programs in Wisconsin as a tool for reducing poverty.

“I’ve been a longtime strong fan of transitional jobs,” Baldwin said during an online presentation Wednesday, July 8, hosted by Citizen Action of Wisconsin. “It’s a tested model. It’s been proven over time.”

The concept has also garnered “significant bipartisan support, especially during shifts and disruptions in our economy,” she continued, “because the transitional jobs program provides the ability for somebody to get additional wraparound services to make them job-ready.”

The program is designed to move participating workers “from having subsidized wages to having the employer — whether that’s a public sector, private sector or nonprofit sector employer —  gradually take over the full wages,” Baldwin added.

The Baldwin bill is “exactly what we should be doing,” Riemer says — and he advocates the measure’s financial formula that boosts federal funding up to 100% of the program in periods of high unemployment.

“It’s times like this when states and localities start to experience revenue shortfalls,” Riemer says. When the economy turns south, states can’t finance job creation programs because they’re required to maintain balanced budgets. “That needs to be a federal responsibility.”